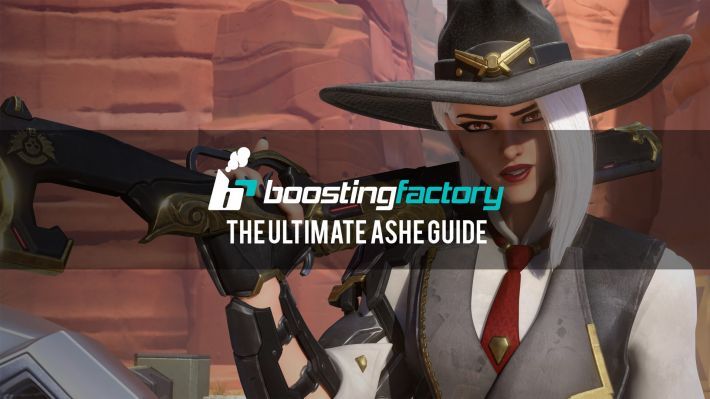 Hey and welcome to my Overwatch Ashe guide. In this guide, I will feature the mid-range DPS hero Ashe. I and other pro Overwatch boosters have played Ashe a ton in most of the Skill Rating ranges during Overwatch boosting sessions and I wanted to share my knowledge with you. Ashe is quite hard to play, so be prepared for a high learning curve. Training ground wouldn’t be a waste of time when preparing to practice with Ashe due to extreme precision required. Veteran McCree players will have less trouble with her and know exactly what I’m talking about. But rest assured, with enough practice and maybe a couple of coaching sessions with our Overwatch coaches, you can too become a Grandmaster Ashe. Without further ado, let’s dig in.

Ashe’s primary damage source comes from The Viper, her rifle. Pressing the button fires a barrage of single shots, it’s worth noting that aiming down sights reduces the rate of fire, but increases the precision and damage. When scoped (aim down sights), a direct hit will deal 85 damage (around 170 for a headshot) and can two-shot many squishies. Use hip-fire in close quarters and on big targets for more damage, and aim down sights when trying to kill squishies from mid-range. The magazine holds 12 bullets and the falloff is about 20 to 40 meters, meaning that Ashe is amazing in mid-range, and somewhat amazing in close range due to the bullet spread during hip-fire and falloff during hip-fire and scoped. Long-range does not suit her. The reload time is quite lengthy, around 4 seconds, this is obviously due to her high damage. Be aware of that when using The Viper because you can’t allow yourself to go without a full magazine into a dedicated team fight or any other strategies you think of. 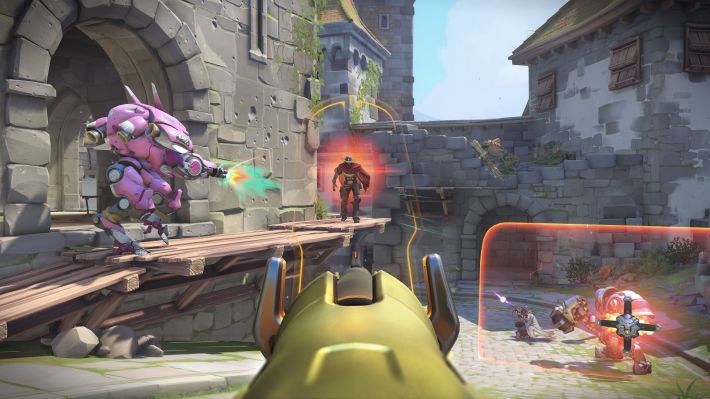 Ashe’s secondary weapon will provide you with three functions. It can knock back enemies relocating them where you want them or simply kill. It works very similar to Lucio’s Sonic Blast. After you use it, a small boom happens from the Coach Gun and deals up to 90 damage when the enemies are at point-blank range, but falloff damage is quite big so the damage won’t be nearly as good. You can use it similar to Lucio’s boop but be careful that you have safe space behind you if you launch yourself far enough, you don’t want to fall into a hole. But, primarily this ability is used to gain high-ground and disengage. The effect is similar to Junkrat’s mine launch, when you’re in the air you have decent control over your hero. When aiming directly into the floor, you are launched in the air and that’s when you try to achieve high-ground, you don’t need to actually have anything underneath you in order to launch yourself, so use the ability to save yourself from going into a pit or double-jump.

Ashe throws a dynamite stack forward and it explodes after 2 seconds, doing burst damage + applying a damage over time (DOT) debuff that can be cleansed with health packs, Zarya’s Particle Barrier, Moira’s Fade, Reaper’s Wraith Form or Doomfist’s Meteor Strike. What’s interesting here is that it allows you to make amazing plays by detonating it earlier than two seconds with The Viper or Coach Gun. This is quite good when the meta is focused on barriers like it was when Sigma and 2-2-2 queue was released. The Dynamite will bounce off shields like Reinhardt’s barrier, but, you can throw it in an arc-way for instance above the team protected by a frontal barrier, detonate it above their heads for massive damage. It can seem tricky at first but after you get the hang of it, it should be a piece of cake and an automatically mechanic work by you, similar to driving a car. 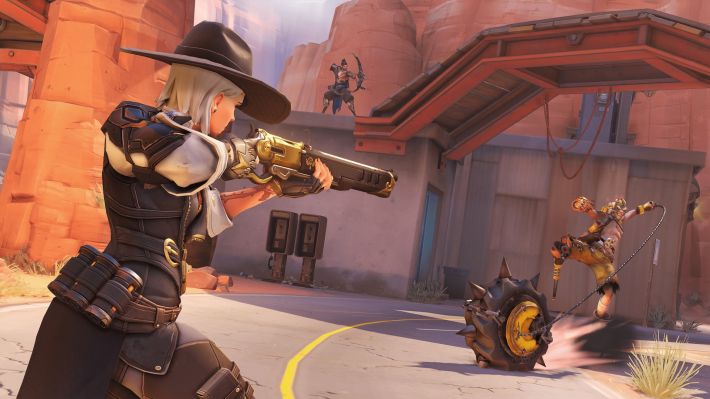 And finally, the ultimate. Ashe’s ultimate will summon you a big robot that charges forward, knocks the first enemy he reaches into the air and stops while firing bullets onto anyone in line of sight. Pretty dope. After he charges and stops he will remain there for about 15 secs or until somebody kills him, RIP. The first charge + knock will deal about 120 damage to anyone he hits, while the bullets will do a maximum of 1100 damage. He has 1200 HP and interestingly enough you can heal him, sleep him, trap, freeze, teleport and so on, pretty much like a real hero. He can even contest payloads and control points, and is included for Wrecking Ball’s Adaptive Shield.

Ashe is quite amazing when it comes to zoning due to her Dynamite and BOB. Dynamite is also very useful for doing damage behind barriers as explained above. A good Ashe with great aim is terror for squishies, like I said, a damage boosted Ashe can one shot squishies. Coach Gun allows you to take high ground and snipe enemies from them or even flanking. Coach Gun can also be used as an escape and boop off the map similar to Lucio. BOB allows you to once again zone, stall an objective/payload or simply set them up for kills. Pharah and Mercy (Pharmercy much?) are threatened by Ashe simply because her range is good enough to scope them down with ease. 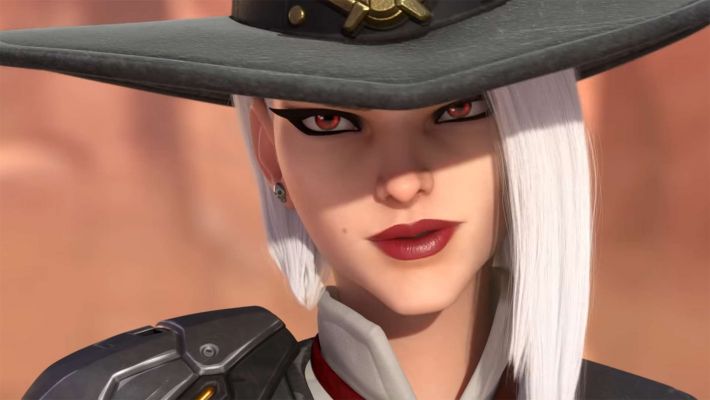 Ashe is a squishy herself, low HP makes her quite vulnerable if caught off guard so stay just out of range of dive heroes (far enough so Winston won't be able to reach you if he uses his Jump Pack) should be an ideal position since she's not highly affected by damage falloff. She can also burn herself with the Dynamite’s DOT. Her long cooldowns are a pain for players who do not use them wisely. Multiple targets on her is a quite bad situation because she can’t deal with them all due to only one escape ability. Similar to McCree, she is squishy and doesn’t prefer more than 1 enemy hero on her. After coach gun is used, she’s stuck and possibly dead. However, when paired with a barrier hero such as Reinhardt, the beauty starts. Not having a barrier to protect her, means that enemy Widow or Hanzo can oneshot you just like you can one shot them. Enemy Genji, Tracer or Torb sitting on you and your cooldowns being used, means she’s likely as good as dead. Our Ow boosting professionals will opt-in for such strategy to kill Ashe 9/10 times. I consider Genji to be the hardest counter due to his ability to jump and follow you when you take the high ground with Coach Gun. Mei is also quite a pain due to her Ice Block that prevents DOT damage from Dynamite or even block it completely until Dynamite’s 2 second timer passes. If she gets close enough to freeze Ashe - Ashe is dead. Doomfist can one shot Ashe with Rocket Punch if he gets close enough, similar story is for Winston and Wrecking Ball. Anyone that is highly mobile and can gap close Ashe is terrible for her.

What To Practice After Finishing This Guide

The staple of playing Ashe is practicing her aim and positioning. Period. Practice your hip-fire and your aim down sights. You need those headshots to one shot squishies when boosted because that might be the only chance you’ll get. Work on your positioning, find high grounds whenever possible. Practice detonating your Dynamite because in most situations you will need to detonate it to achieve your goal. To get that final push that you need to become a Top 500 Ashe, hire one of our pro Overwatch coaches and let a player specializing in Ashe teach you. I’d love to hear what do you think about Ashe? How are your results with her? Let me know in the comments below and good luck!