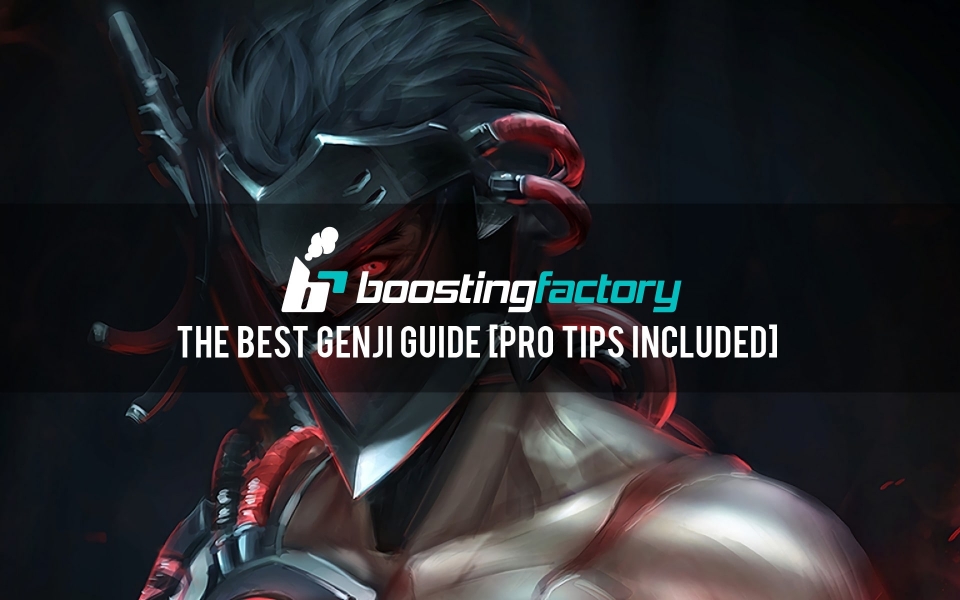 Hey everyone! Today I’m going to how to play Genji in Overwatch like a Top 500 Overwatch boosting pro.

I’m Blink, and I’m a professional Overwatch player here at Boosting Factory. I often play Genji when he’s in a good spot in the current meta. You can find out is he currently in our regularly updated Overwatch best heroes tier list.

In short, Genji is one of the best Overwatch assassins, capable of insane duels with other DPS heroes, destroying squishies and even tanks.

Genji is essentially built around incredible burst damage, his whole kit is all about bursting people down, as you already probably know, but it’s important to get it out of the way.

Burst damage means that it’s hard to heal through, anyone that’s low HP is easy prey for Genji. The second important fact about Genji is his high mobility, no other DPS has as much mobility as Genji. Faster movement speed, in combination with a dash, double jump and a wall climb mean no area is unreachable for him.

This also means he’s a good hero to dive in, pick up an easy kill and get out before anybody knows what happened.

His base attacks are used for two things essentially. Either poking people to charge up the ultimate, or bursting them down close range.

Work on practicing your primary fire for poking people long-range, and your alternate fire that’s more bursty against close-range targets. A combination of both will mean you’re charging the ultimate faster, poke down enemies with the primary fire and secure kills with alternate fire, totaling in globally increased DPS.

His dash is his strongest ability. It’s his means to engage, disengage or secure a kill. If you’ve participated in a kill, your dash cooldown is reset. This is how a pro Genji usually builds momentum and snowballs by wiping the enemy team starting from the first dash reset.

An experienced Genji is aware that many times the best defense is actually offense, by picking up kills he opens up a window for more kills, or an escape, rather than escaping on foot in case an escape is needed.

While deflect has multiple uses, the primary one is defense and/or retreat. Deflecting damage means he deflects incoming damage and is protected meanwhile. Note that projectile damage can be deflected, while beam-like damage cannot be.

Sometimes you can even deflect ultimates such as Zarya’s one, but that’s extremely rare and hard to do, so don’t count on it most of the time. A more experienced Genji will use deflect to even secure a kill, since like I’ve said, it deflects projectile damage and abilities. Practicing this will take a lot of time, if you’re not a pro Genji and didn’t take Overwatch coaching lessons here at Boosting Factory, you should probably stick to just using it defensively.

Dragonblade is his ultimate that requires a lot of mastery (no kidding duh). Using it unlocks Genji’s potential to actually pick up solo kills. However, you are required to have insane spatial awareness.

Combining it with Nano or Grav will allow you to more safely wreak havoc throughout the enemy team. Once you pop up the Dragonblade, your dash cooldown is reset instantly.

Now that you’re familiar with his abilities and all the basics, let’s see what Genji’s strengths are.

First Genji’s strength is being able to reach the high ground easily, therefore, he’s strong on maps with lots of high ground. This means he can either go to a high ground defensively or pressure enemy players on the high ground without having to run around to get to them.

The second strength is domination against uncoordinated teams, meaning that he easily picks out enemy players whenever he wants and who he wants.

And the third strength is, he’s an insane dueler, a good Genji can beat any DPS or Support in the game. However, to excel at this, Genji needs to learn the abilities of all heroes in the game so he can predict and outplay them.

Before I proceed onto the Top 5 tips, I’d like to talk to you about his dual playstyle.

The first playstyle is the poke playstyle like I explained in the primary fire section, your goal here is to stay on the range, apply pressure and charge up your ult.

Genji is not a frontline assassin, your goal is to be strategic and patient, poke, pressure, build ultimate and look for opportunities. When you find an opportunity, that’s when you switch to the secondary playstyle.

After you find an opportunity to capitalize on, or your team goes in, you switch to this playstyle. This is where you actively pursue high DPS in melee range. Communicate with your team, you guys cannot go in when they’re full HP with multiple ults ready.

This will only get you and your team killed. Whenever you attempt to switch from Poke to Burst, you need to have a solid argument why did you do it. It cannot be random. You need to be ready at all times to capitalize on a presented opportunity. No downtime.

If you often get shut down when switching playstyles, you probably didn’t go in on a worthy opportunity. This is a tip that our OW boosting pros tell their clients over and over.

1. Dash then Alt Fire or Alt Fire then Dash

People think or used to think that you can alt-fire then dash because it has no consequences, this isn’t true.

If you do alt-fire then dash, there’s a minor delay after your dash is finished, while it is a small delay, it can cause problems when playing such a high-speed combo-based hero.

However, if you do the dash and then 180 alt-fire into a headshot. That’s quite more deadly and has no delays.

2. Tips on dodging abilities during ulting

The first one is deflecting prematurely in order to avoid abilities such as sleep dart. A combo is quite simple, dash up > deflect > animation cancel into a dash as you’re going into a combo.

This is done in order to bait out sleep darts and similar abilities to prevent them from punishing you early during your ult.

The second tip being, when you’re preparing to do a nano from a high ground, you save up a jump because you’re already at high ground. Therefore, you jump from it, when you’re mid-air you jump and bait out hooks, flashbangs and similar abilities.

As you probably already know, Genji can be a “hitscan” hero. Your deflect mimics the type of fire that was fired at you, for instance, a Widow’s sniper reflected, will travel back to her at the same speed. So will the Pharah’s rocket.

Therefore, try acting stupid and while knowing where an enemy hero is that you want to deflect, fire or focus on another spot, he or she will often think you’re not paying attention, and that’s how you will punish them.

Practice “sensing” when that particular enemy hero is going to shoot at you, and while you’re facing a different direction, pop deflect and flick instantly towards that hero. You will be surprised how many times this works.

This is a combo that extremely high skilled Genjis like our Overwatch top 500 players. The goal is to get close enough to a squishy or anyone who you want to burst, double alt fire shuriken into the head and dash. This should provide over 160 damage which would essentially one shot a Tracer.

By using the nano blade, you can one-shot any squishy in the game by simply slashing and then animation canceling with your dash.

You can get countered by Lucio, however, you can dash to get close to Lucio and if he tries to counter you, you can slash dash and instakill him while he’s in the air. You can also counter many more ults by using this trick. It just requires lots of practice.

Wrapping The Guide Up

I hope you enjoyed my best Overwatch Genji guide. This is how I and my colleagues in the Ow skill rating boost team play him.

The ideal way to become a Pro Genji would be to get Overwatch coaching lessons from our Genji mains. Learning from a personal coach is definitely better than just reading guides. Definitely give it shot.

Good luck with your games!