Today our pro Overwatch boosting team will discuss the new hero, Ana Amari! Blizzard has shown us the newest addition to the Overwatch team, and it happens to be one of the founding members: Ana Amari, the “battle-scarred veteran” who has specialized weapons to give long-range support to her teammates. Her unique skills will probably make her high on our Overwatch Tier List. Let's dig in, shall we? 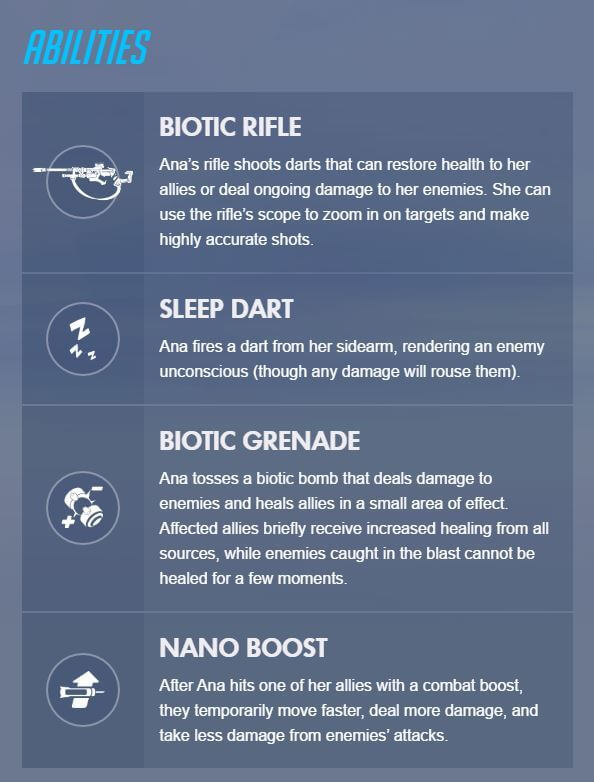 Uses darts that can heal allies or harm her enemies. She also has Biotic Grenades that will both heal her allies and harm enemies within an area of effect range. The grenade makes affected allies get a temporary boost to any other healing, and affected enemies are unable to be healed at all. Our Overwatch boost experts think this ability will be quite powerful in fight scenarios. Her sidearm weapon shoots a Sleep Dart that will put enemies down but will not kill them, creating another stun effect in Overwatch. Finally, her ultimate ability is Nano Boost, which gives teammates increased speed, resistance to attacks, and damage. What is interesting is that our Overwatch Boosting team was all but certain that the new character would be called Sombra. We had a good breakdown of why it would be, and while some elements of that speculation were right: Ana is a support sniper, disappeared after the fall of Overwatch, and is Pharah's mother. But other than that, our OW boost team got it wrong. Well played, Blizzard.

Thank you for reading our Ana guide and leave a comment! :)