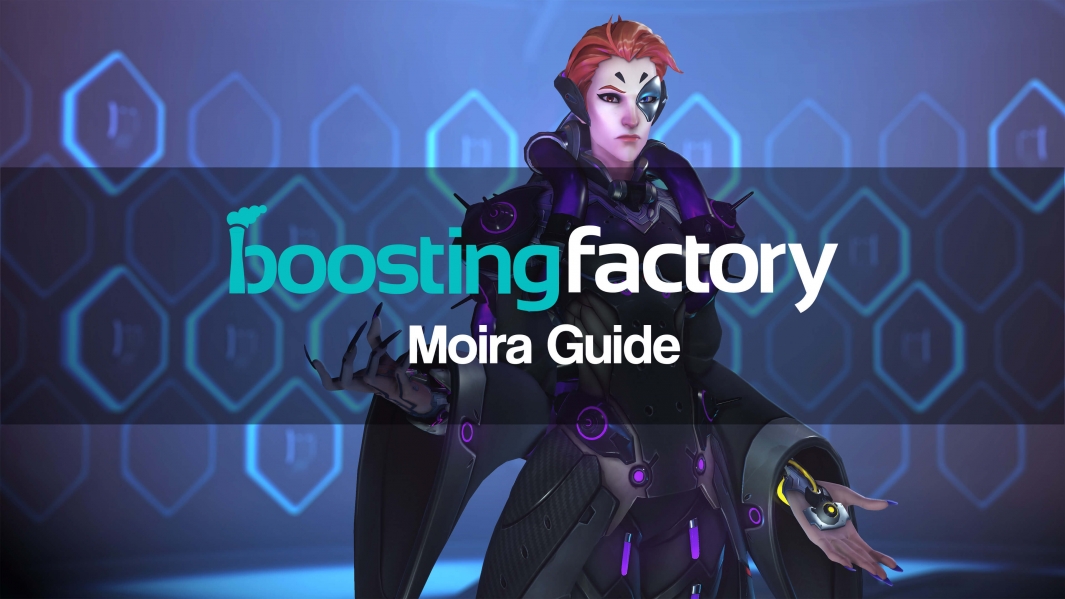 Hey lads! Our Moira guide is here and it contains all of the essential info you need to start rocking with Overwatch's latest healer within minutes. Moira is a support hero, healer, who is also capable of dealing decent damage. She's a biotic healer capable of tons of healing or damage in any encounter. She's quite versatile and her kit allows her to heal teammates from a distance or attack enemies from afar. Apart from that, she's able to teleport and shoot a big laser to nuke enemies or get her allies straight back into the fight. How? Learn more below in this guide by our professional Overwatch boosting team. Moira was released on November 16th, 2017. Check out how she ranks on our Overwatch Tier List.

Moira launches a rebounding biotic sphere; she can choose between a regeneration effect that heals the allies it passes through or a decay effect that deals damage to enemies.

Moira channels a long-range beam that both heals allies and bypasses barriers to damage her enemies.

1. Try to pick Moira in combination with another healer such as Mercy, our Overwatch boost team believes she isn't cut to be a solo healer. 2. Fade allows you to instantly move in and out of the fights/area. 3. Fade can be used as a great flanking tool. 4. Your LMB and RMB abilities don't have cooldowns but your LMB uses Biotic resource that you need to recharge by stealing health from enemies with your RMB. 5. Your LMB heal passes through allies, practice healing more allies at once by aligning them. 6. The RMB siphon has about 20 meters range, fairly decent. More than Symmetra's or Winston's locking abilities. 7. Your ultimate has about 30 meters range. 8. Your ultimate ability penetrates barriers like Winstons or Reinhardt's. 9. You can use the Biotic Orb to zone enemies and make them move, preferably having someone from your team get them then. 10. A nice healing combo is a Biotic Orb > Fade closer > LMB heal. 11. You don't get Biotic energy by siphoning barriers. 12. Your goal will usually be to dive in with your flankers or divers and help them eliminate the enemy backline. 13. When channeling your Ultimate you can be stunned, rooted, hooked... Our Overwatch skill rating boost professionals can't stress this enough. I14. t takes about 400 damage from your RMB to refill your Biotic Energy fully. 15. You are countered by burst damage heroes so don't bother 1v1 them, but vs consistent damage heroes like Torbjorn or Symmetra, you could duel them.

I hope you enjoyed reading our guide, feel free to leave a comment! Good luck with Moira.

This page was generated in: 0.72 seconds.