This Is The Best Apex Legends Weapons Tier List (Season 10) 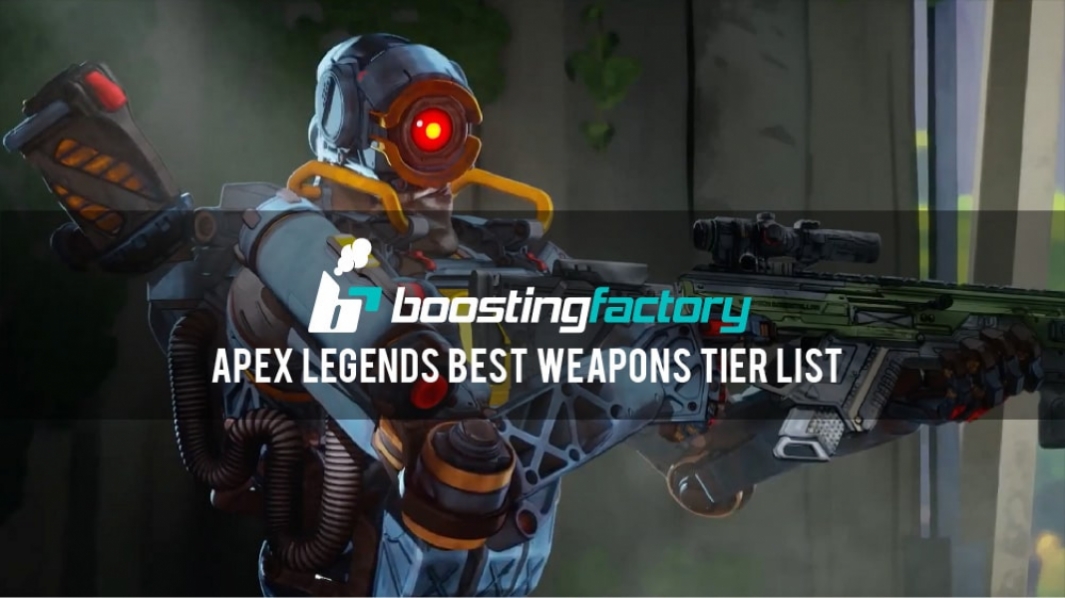 My team and I are all Apex Predator players that play the game as a real job in the Apex Legends boost squad, therefore we depend on knowing what are the best Apex weapons in order to perform at the highest level. Please take your time and read through the explanations as well.

Below you will find the Apex Legends weapon tier list and explanations for each tier and why I think they belong here. Let's start!

Bocek was added with Season 10 and it was immediately S tier. It's an LMG with a fire rate between Flatline's normal and hopped-up fire rate. It's good for mid to long-range and somewhat worse on close range, however, it hits hard. It also has a special rev up mechanic, if you rev it up with a Thermite grenade, similar to how you rev up a Sentinel with a shield battery, you increase the fire rate for 90 seconds, however, every shot reduces the timer by 2 seconds.

Bocek was added with Season 9 and I've put it in A-tier. It was nerfed after release and players learned how to play against it, however, still performs quite well if you're precise, not to mention when you add Deadeye's Tempo. The quietness of it is also great.

The sniper addition to Apex's sniper roster is a so-so weapon, with amazing sound, however. It's a bolt-action sniper rifle, similar to Longbow, but you can also charge it up with a shield battery to achieve Disruptor which melts enemy shields. With Deadeye Tempo it's much more spammable as well. Currently viable.

L-Star became a normal drop-in Season 4. There are no mags and reload is needed when you overheat it. You need to learn how to manage it's overheating mechanic and at that point, you're set for an A-tier weapon. I don't personally like this one due to the lack of range but it's a decent alternative to a shotgun second weapon.

Not much to say here except that it's an amazing legendary sniper with a lot of potential for headshot one-shots. It's quite situational and rare. You don't want to have it with low ammo if you don't expect that you will either be stuck with no loot to replace it or in a late-game ring where there will be no mid to long-range combat. Therefore, don't just blindly use it, and if you do, make sure to use it well so you can grab another weapon that you can gear up quickly, like a Peacekeeper or EVA-8.

Mastiff is a decent shotgun, not as good as Peacekeeper and Eva-8 but decent and viable until you can replace it with the former. Since it's more spammable than Peacekeeper it's maybe a better option for those who don't hit every shot.

Peacekeeper is a great shotgun but rewards precision, it's not as forgiving as Mastiff or Eva-8 (less spammable), therefore it's less consistent, choose wisely.

Wingman is great and offers a lot of potential for good players, however, requires great precision and is unforgiving to less precise players, it would be S tier otherwise.

R-99 is a great weapon, hits hard at close range, and has been a pro player favorite for a while now. However, it's not that easy to use due to recoil management and most people won't utilize its capacity. Check out our Apex Legends Aiming Tips for sure.
Read more: Best Apex Legends Characters Tier List

Oh boy, when this rifle got in the game it was an S tier by far. But the developers did a couple of rounds of nerfs, slowed the fire rate, removed the energy mag from it and now you have 4 shots in a 12 round magazine. However, the hit-scan factor and ease of usage still makes it a great sniper.

Devotion is currently not in great shape, with Turbocharger yeah it's usable but without, just not good enough. Lacks range as well.

The longbow is changing quickly with the buffs and nerfs. Not in great shape right now, possibly the weakest sniper right now.

Triple Take also got its round of buffs throughout the seasons. What's good about this sniper is a fast fire-rate, low shot fall-off (near hitscan), ability for you to actually hip-fire at enemies at close range if needed, finish them off with fast low damage shots, or let it charge up as soon as you get Choke hop-up that's not that rare and do serious long-range damage.

This beauty is one of my personal favorites, nerfed throughout the season but still performs great. Whether that's short-range or mid to long-range, she does it all.

G-7 got it's time to shine in Season 3, some would argue that it's even an S-tier weapon. Its damage was buffed, it can do serious damage in close combat and mid-range combat and the projectile width was increased too.

This one is an alternative for R-99 players who prefer to use a heavy weapon that does more damage than light mags, but a slightly slower fire rate. Heavy weapons also slow down unfortified enemies (Caustic and Gibby can't be slowed). It's a good idea to have a Prowler player in combination with an R-99 user, so you can benefit from insane close-range damage and slowing effects. A Selectfire hop-up is also an absolute must and make sure to get it ASAP. With the hop-up, Prowler is easily A tier.

Hemlok performed great in Season 7 and Season 8 but since Season 9 it was nerfed and is now viable, balanced in my opinion

Havoc is a little better version of Devotion right now, performs better on mid-range with manageable recoil. With Turbocharger, it gets really good but it's usable without it too.

Spitfire was so good it had to be placed in a care package rotation.

Mozambique used to be a meme weapon but now they buffed it and it's a decent situational weapon for the very early game, you can actually compete against proper weapons on the first landing. However, the meaning behind the name is pretty dope. The Mozambique Drill, also known as the Failure Drill, or Failure to Stop drill, informally, "two to the body, one to the head is a close-quarters shooting technique that requires the shooter to fire twice into the torso of a target (known as a double-tap or hammered pair to the center of mass), and follow up with a more difficult headshot that, if properly placed, will instantly stop the target if the previous shots failed to do so. Hence the Mozambique 3 bullet pattern.

Alternator is currently a care package weapon and therefore S tier, it utilizes disruptor rounds which is an insane hop up.

Probably the worst weapon in the game, they tried buffing it but it's still just not good.

Early game great, switch it up as soon as possible. Lacks range, can rip through early armor if you aim well.

To sum it up

There it is, I hope you've found your new main weapon!

Make sure to check out our Apex Legends rank boosting services so we can help you get any RP you want, whether you play with us in a party or we play on your account to get it. We can also do any badge for you with our Apex badge boosting service. Risk and hassle-free, rest assured you will leave satisfied.