0
was successfully added to your cart.

My team and I are all Apex Predator players that play the game as a real job in the Apex Legends boost squad, therefore we depend on knowing what are the best Apex weapons in order to perform at the highest level. Please take your time and read through the explanations as well.

Below you will find the Apex Legends weapon tier list and explanations for each tier and why I think they belong here. Let’s start! 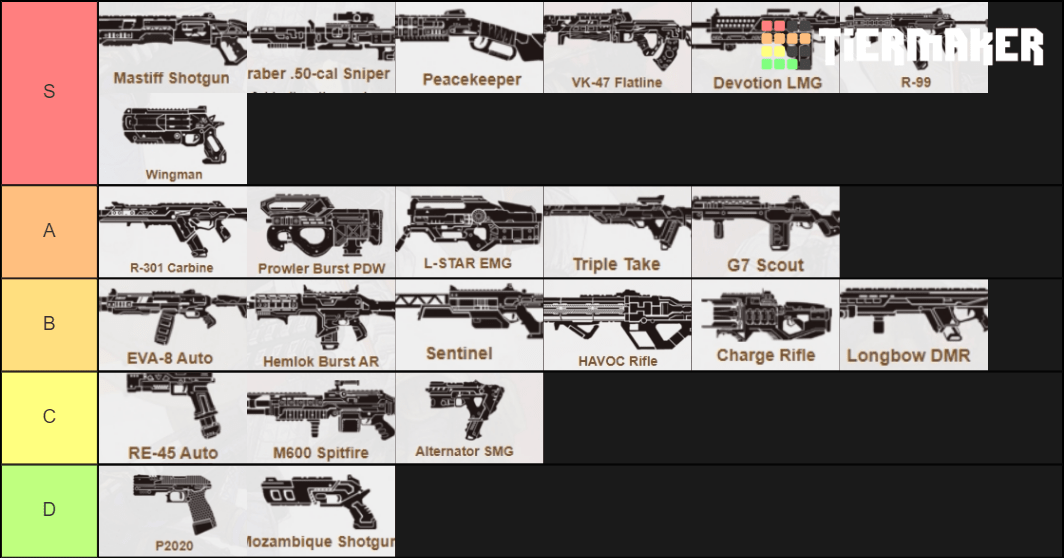 The sniper addition to Apex’s sniper roster is a so-so weapon, at least it sounds amazing. It’s a bolt-action sniper rifle, similar to Longbow, but you can also charge it up with a shield battery to achieve Disruptor which melts enemy shields. We will keep monitoring its performance.

L-Star became a normal drop in Season 4 and it’s now actually a great weapon even though it got nerfed. There are no mags, no reload. You need to learn how to manage it’s overheating mechanic and at that point, you’re set for an S tier weapon. If you pick one up in the early game it’s very strong, later on you can replace it as it slowly becomes A tier when you start picking up the attachments for other weapons.

Not much to say here except that it’s an amazing legendary sniper with a lot of potential for headshot one-shots. It’s quite situational and rare. You don’t want to have it with low ammo if you don’t expect that you will either be stuck with no loot to replace it or in a late-game ring where there will be no mid to long-range combat. Therefore, don’t just blindly use it, and if you do, make sure to use it well so you can grab another weapon that you can gear up quickly, like a Peacekeeper or EVA-8.

Another legendary item, this time a shotgun. Pretty amazing all-around, you have limited ammo so don’t waste it and learn how to aim with it (in training mode) because it has a weird aim, not like a regular shotgun.

Our first non-legendary weapon on the Apex Legends weapon tier list. Peacekeeper has been great since the launch of the game and still is, definitely S tier. Pro-tip for when using choke – allow it to charge a little by aiming down sights, then cancel the ADS and you will still have the charge for a few seconds even when not aiming ADS.

Even though they keep nerfing Wingman, removed the Skullpiercer, reducing its headshot damage multiplier. Wingman is still an amazing weapon. However, there’s a little catch – don’t take it unless you have a ton of practice with it. A good player will shine with a Wingman but a bad player will be a waste of space with it.

Since the nerf of R-301, R-99 has taken its spot. R-99 got its batch of nerfs too. However, there’s a catch just like with a Wingman. An amazing player will be able to clip down enemies in a single mag, a bad player won’t land anything due to its huge recoil. Make sure to get that light mag ASAP or the weapon isn’t good at all.

Oh boy, when this rifle got in the game it was an S tier by far. But the developers did a couple of rounds of nerfs, slowed the fire rate, removed the energy mag from it and now you have 4 shots in a 12 round magazine. I’ve decided to put it to an A-tier because it isn’t that good anymore and is quite situational like all snipers. However, A tier is still pretty good and don’t hesitate to pick it up if you feel confident.

Flatline got quite buffed for Season 3, and can now attach an Anvil hop-up that turns your semi-auto fire mode into a beast! An overall pretty decent weapon, if you can get your hands on an Anvil this is an S tier by far.

Longbow used to be good, then bad, now it’s buffed again a little and I believe it deserves an A-tier spot. Overall a good sniper since the launch of the game. For an expert sniper, it’s much better than Charge Rifle since enemies can’t dodge and hide when you’re shooting at them, unlike Charge Rifle. A hit is a hit, and a headshot deals massive damage.

A second shotgun, still in pretty good shape, and even got a Double Tap hop-up recently, you need to learn how to control it with a Double Tap because you’ll just be wasting ammo in the mag and ammo overall if you don’t learn how to control it. Especially because you run out of ammo quite fast and you need to carry at least 32 shotgun (2 stacks) ammo at all times since you don’t want to run out of ammo at any point.

Triple Take also got it’s round of buffs throughout the seasons. What’s good about this sniper is a fast fire-rate, low shot fall-off (near hitscan), ability for you to actually hip-fire at enemies at close range if needed, finish them off with fast low damage shots, or let it charge up as soon as you get Choke hop-up that’s not that rare and do serious long-range damage. With Choke this sniper can be an S tier.

This beauty is one of my personal favorites, however, recent nerfs caused it to be a subpar choice compared to R-99. It’s still a better choice for people who can’t manage R-99 recoil, and on top of that, it gives steady mid-range damage, unlike R-99. You can also attach an Anvil on it, but I don’t prefer to use it on it since Flatline is a much better choice for an Anvil.

G-7 got it’s time to shine in Season 3, some would argue that it’s even an S-tier weapon. Its damage was buffed, it can attach a Double Tap, it can do serious damage in close combat and mid-range combat and the projectile width was increased too. However, I don’t prefer it as there are much better weapons out there (read above), but it’s not a shabby weapon like it used to be since you usually find it early game easily. With Double tap it’s arguably even S tier.

This one is an alternative for R-99 players who prefer to use a heavy weapon that does more damage than light mags, but a slightly slower fire rate. Heavy weapons also slow down unfortified enemies (Caustic and Gibby can’t be slowed). It’s a good idea to have a Prowler player in combination with an R-99 user, so you can benefit from insane close-range damage and slowing effects. A Selectfire hop-up is also an absolute must and make sure to get it ASAP. With the hop-up, Prowler is easily S tier.

Definitely not my weapon of choice since I don’t prefer burst weapons, but Hemlok is not that bad if you know how to play that style. Definitely B tier.

Havoc is a decent weapon, very good for players who can’t manage recoil as I find it very “forgiving”. A lot of bullets in the mag and not that huge recoil, you ought to hit something with over 30 bullets.

Chaotic spread and slow fire make Spitfire a bad choice. Skip if you got anything better.

Meme weapon, but the meaning behind the name is pretty dope. The Mozambique Drill, also known as the Failure Drill, or Failure to Stop drill, informally, “two to the body, one to the head is a close-quarters shooting technique that requires the shooter to fire twice into the torso of a target (known as a double-tap or hammered pair to the center of mass), and follow up with a more difficult headshot that, if properly placed, will instantly stop the target if the previous shots failed to do so. Hence the Mozambique 3 bullet pattern.

Decent early game weapon, replace it as soon as possible.

In season 4 you can pick up a legendary one and then it’s usable, otherwise, I suggest you skip it.

An alternative to Alternator, huehe. Early game great, switch it up as soon as possible.

To sum it up

There it is, I didn’t cover the other tiers because those weapons are just not that good and should be replaced as soon as you get one from the list above.

I hope you enjoyed it, feel free to leave a comment and check out our Apex Legends characters tier list that we regularly update to find out the best Apex characters for you to play. And of course, our Apex Legends boosting services so we can help you out with your RP and badges fast, safe and anonymous.

When you visit any website, it may store or retrieve information on your browser, mostly in the form of cookies. This information might be about you, your preferences or your device and is mostly used to make the site work as you expect it to. The information does not usually directly identify, but it can give you a more personalized web experience.

Because we respect your right to privacy, you can choose not to allow some types of cookies. Click on the different category headings to find out more and change our default settings. However, blocking some types of cookies may impact your experience of the site and the services we are able to offer.

These are used to track user interaction and detect potential problems. These help us improve our services by providing analytical data on how users use this site.

These cookies are strictly necessary for the site to function properly.