Overwatch Mercy - This is THE ONLY Guide You Need [10 TIPS] 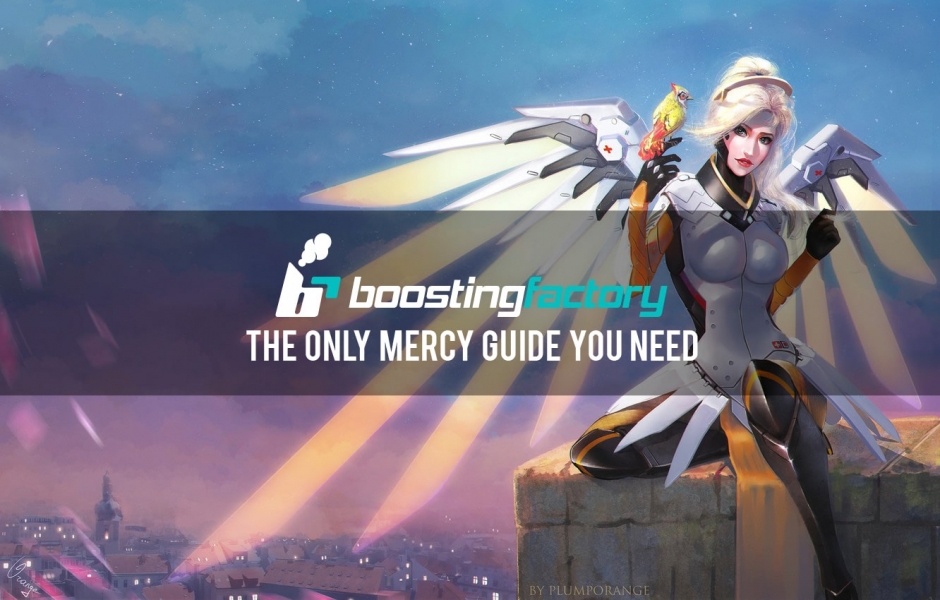 Hey there Mercy players! I’m Blink and in the next 5-10 minutes I’ll teach you how to play Mercy better, one day hopefully like I and the rest of the Overwatch boosting team.

We’re all professional Overwatch players that play Overwatch as a real job, we often give out free guides like this one for you to learn our playstyles as well!

Let’s start the Mercy guide already, shall we?

A little about Mercy

Angela Ziegler by her real name, or her Overwatch name Mercy, is a support hero. Duh!

She’s been through a lot of reworking, for instance, back in the day her ultimate could resurrect the whole team, now she resurrects only one ally.

She isn’t that hard to play, that’s why we suggest her in our Top 10 Heroes To Carry In All Ranks post. However, in order to become a Top 500 Mercy like I am, you need to learn how to position properly and make good choices when there’s a situation that needs a solution.

Let’s proceed with the 10 tips.

The crucial thing here is you need to know when and where to resurrect. The general advice is to do it behind the walls or covered by a shield. Or when casting the resurrect to move your mouse rapidly around in order to try and avoid any incoming damage.

A more advanced tip is to use resurrect while falling, essentially, you start casting a resurrect before you start falling off a roof/cliff/whatever, the cast will still channel and you will NOT be a static and easy target for opponents to pick you off.

However, in the end, your game sense will be crucial for mastering resurrecting, you need to practice alone or with one of our Overwatch coaches that can help you master it.

2. Don’t ignore your grounded allies when playing with Pharah

You’ve probably heard of the famous Pharmercy duo. In case you haven’t heard about it, read the post I just linked.

3. Learn how to super jump and bunny hop

Bunny hopping is a technique where when you fly to your teammate, instead of stopping there, you keep flying further. This is super useful when you need to reach a further destination in order to escape someone chasing you, or simply heal someone that’s further away.

You can do it by pressing the space bar right before you reach the desired target. You will need to practice it so I suggest you practice it with the bots before you start utilizing it in real matches.

Super jump is a technique where you actually jump high in the air before reaching the target you’re flying to. In order to do it, press CTRL and SHIFT together, then fly to the target and right before you reach the target press the space bar. Similar to bunny hop, however, this one propels you in the air instead of further on your flight path. Try it out with the bots first.

Just like any other hero, you need to be aware of your surroundings, knowing where your allies and enemies are. However, this is even more important with Mercy. You need to have the next target in mind when using Guardian Angel. Therefore, before you even reach your current target, you need to know who do you fly to next.

A second thing regarding tracking is, you need to peel for your secondary healer if your team has one. Support heroes are one of the most often targets for flankers like Tracer and you will need to track your second healer at all times and help him if needed.

5. Know your strengths and weaknesses

Mercy is weak against McCree, Winston, Sombra, Soldier:76, Genji, and Tracer. Regarding McCree it’s pretty obvious, his ult gets you when you’re in the air, and his flashbang means instant death for you.

Winston sitting on your ass nonstop, Sombra’s hack and burst are deadly. Widow’s will most often target you so make sure you are moving all the time. The soldier can deal damage from range and his ult means death if you’re in the line of sight. If Tracer ults you, don’t panic and fly to another ally. Genji’s mobility and burst are insane, bait out his dash and guardian angel to somewhere, rinse and repeat until he’s done.

Mercy is good against Symmetra, Mei and Lucio. Against Symmetra, tell your tank to go through the choke points filled with turrets while healing them until they clear out the turrets.

Mei is strong vs heroes in close range, you have a lot of mobility so just don’t stick close to her while healing targets that she tries to freeze and burst, if she ults, find an ally that’s outside and immediately fly to him.

Lucio sitting on your ass shouldn’t be a problem, fly to a target that will kill him if he keeps chasing. Not to mention you are good against his boops since you can always fly up when he boops you off the map.

You won’t use the pistol much most of the time, but there are a time and place for everything, including the blaster. For instance, an enemy Widow out of place can be a good target to solo kill if you can approach her.

Another good target is Pharah during her ultimate cast, she’s essentially a free kill.

Positioning is a skill every Overwatch player needs to learn. As Mercy, you never want to be in one spot for too long because you’re an easy target. Hop around the place and don’t be static.

Utilize the fact that you can heal someone behind the wall for a few seconds, meaning, you can channel your heal on someone, hop behind the wall, hop out and repeat. While using your ult Valkyrie, keep switching between heroes so you can never be an easy target.

8. Know who and when to power boost

Power boosting an ally doesn’t just give them more damage, it also indirectly helps them build up their ultimate. The best targets to power boost are your second healer, Zarya or baby D.Va.

If your team is all healed up, make sure to power boost someone, you need max uptime on both healing and power boosting. It’s important to know you can’t boost Junkrat’s ultimate, Hanzo’s ultimate, D.Va’s mech bomb, Torb’s Molten Core and Wrecking Ball’s minefield, and a couple of other ones.

To access settings, press Options, then Controls. There’s a dropdown menu where you select Mercy. The first setting is Toggle Beam Connection, when you set it to ON, you don’t have to hold your mouse button non stop to heal.

The second setting is Guardian Angel Prefers Beam Target, I prefer it OFF, when it’s ON, you will fly to the target that has your beam attached, for instance, if the target is behind you and you use guardian angel, you will go in reverse which would be inefficient. This is a personal preference.

The third one is Toggle Guardian Angel, you need to turn it off because this means because if you hold shift but your line of sight is blocked, you will fly as soon as it’s in line of sight. If it were ON, you’d have to press it only when it comes into the line of sight, not before.

10. Learn from watching other players

Watch popular streamers and YouTube videos. Apart from that, I suggest purchasing Overwatch coaching lessons from our pro players because they are legitimately one of the best players in the world that can teach you a lot.

In case you just want to get your Skill Rating up, OW Skill Rating boosting service is a great choice, especially if you buy it in duo-mode where you could play Mercy and get tips from our players while increasing your skill rating.

That’s all from me today, I really hope you learned a lot and see you next time!