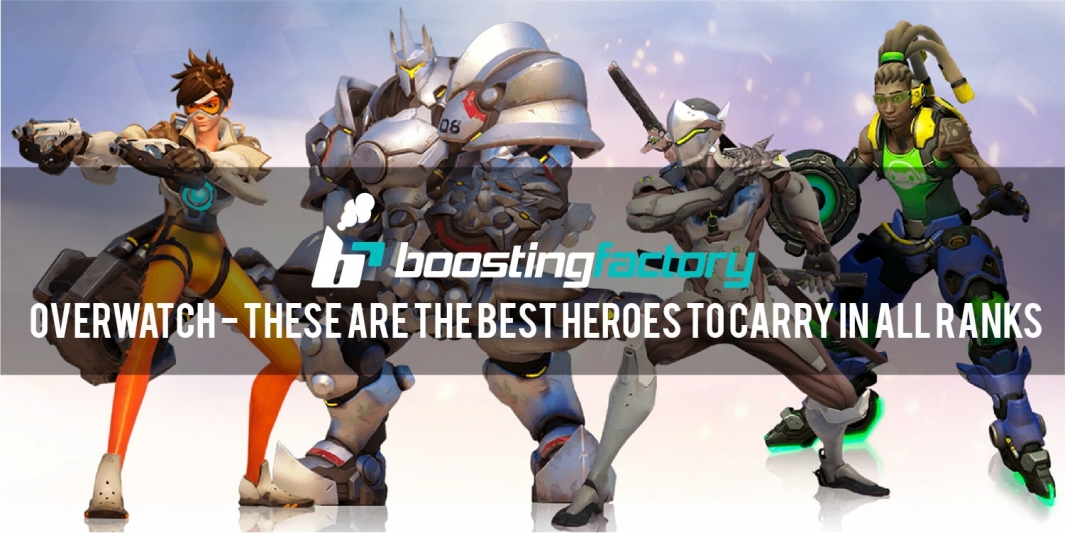 Hello, hello! I’m Blink. Welcome to my Overwatch guide on best heroes to carry in every rank, I will go through the best heroes for each tier. They are, of course, my personal preference and it doesn’t mean it will work for you, however, it’s certainly a good starting point!

I’m a professional booster, working in Boosting Factory’s Overwatch boosting team since Season 1. I’ve boosted hundreds of accounts and these are the ones I use when doing my job.

Without further blabber, let’s dig in!

Regardless of whether Pharah is currently in good shape, which of course, you can find out in our regularly updated Overwatch best heroes tier list, she can still be played with great success in these Overwatch tiers.

For those who are not familiar with Pharah yet, or just want to learn more from the pros, we’ve got a Pharah guide for you right here.

Low tiers usually have a ton of Mercy players, as you probably already know, Pharah and Mercy are an insane combo, often called Pharmercy. Essentially, play it safe and do your best to have consistent uptime damage wise. Do not AFK, do not think, shoot at people.

Learn how to optimally play around flight control to maximize your flight uptime. If you’re struggling with it, one of our Overwatch coaches can assist you. With Pharah, it’s really easy to catch people out of position and burst them down, especially in lower ranks from Bronze to Gold.

Reaper is often in great shape, and at the moment of writing this article, he’s great in the current meta, and will likely remain in a good spot for the near future.

The way to play Reaper is quite simple, get in the enemy team with Teleport or simply walk in with your team, pick up a kill or two and get out with Wraith. You DON’T want to use Wraith to get into the fight because you don’t have an escape.

Do not hesitate to solo ult people because you’re waiting for the perfect opportunity if it means you’ll pick up a kill, go for it.

Doomfist is very strong at the moment but has a fairly high skill cap, meaning you can’t just pick him up and expect to dominate. You’ll need hours of practice first, or some Overwatch coaching with one of our professionals. If you prefer a less effective method of learning, by just watching videos with no help, check out this Doomfist main on YouTube.

You will first need to learn all the techniques, and then learn how to chain them together into a meaningful combo. Play it safer at first, get kills that you feel confident getting, don’t try to pull off insane stunts just yet.

Moira is an amazing hero. She may fall out of meta at some point but I believe she will still be a great choice for lower ranges.

Make sure not to spam heals before a fight is in progress because newbie Moira’s tend to do that. It’s important to know that making sure you stay alive is the first priority, then healing your allies. If you dive and die trying to save someone who overextended, nobody is getting healed.

And please, do not brag with 4 gold medals while losing, because that probably means you’re DPSing too much and not healing as much as you should be.

Lucio is picked basically all the time, even when he’s in bad shape.

For starters, you need to practice wall surfing, you can do so at Lucio Surf discord. That’s how you survive and travel most of the time.

Aim not to waste Amp because that’s the most important ability you have, and you should be using it only when your team needs it. For a quick escape, passing a choke point and so on. The insane Lucio tricks that Grandmasters do shouldn’t be of your concern, stick to fundamentals.

If you can get used to Brigitte’s new playstyle since the rework since it requires quite a bit more skill, you will have excellent results in higher tiers with her.

If you focus on having Inspire and Rally uptime, your Skill Rating should go up. In case Brig falls off from the meta, Baptiste could take her place in the next meta because he looks quite promising on PTR.

Even though Sigma is better than Roadhog, Sigma is quite harder to play which is what we don’t want in lower ranges.

Roadhog has decent sustain, game-changing hook potential and decent peel for your supports. Very underrated. In higher tier ranges, he won’t do as well since the skilled players will punish you for it. But in lower ranges, play safe, peel and protect your team, try to get a good hook or two and enjoy the Skill Rating boost by playing him.

For more experienced players, Sigma is an amazing choice, even though he might fall out of meta, so make sure to check our best Overwatch heroes list regularly for updates.

You need to learn his mechanics and orb tricks before playing him in higher ranges, our Sigma guide will certainly help you. He has the potential for some amazing plays, but very hard to master him.

Orisa deserves a category of her own, she’s currently an amazing tank overall and I don’t see her end just yet, even on PTR.

Her Fortify is the strongest ability in her roster. It’s very good for baiting abilities and denying damage whenever available. Practice body blocking by using Fortify.

Watch some streamers and tournaments to learn how they use Fortify and place shields. If you really want to master her, one of our main tank coaches can certainly help you with ease.

I would like to add Reinhardt, Hanzo, and Baptiste. Reinhardt is always a solid pick, while Hanzo and Baptiste might shine in the future even more. I hope you enjoyed this guide and that you will climb the ladder much more easily now! Have a great day.