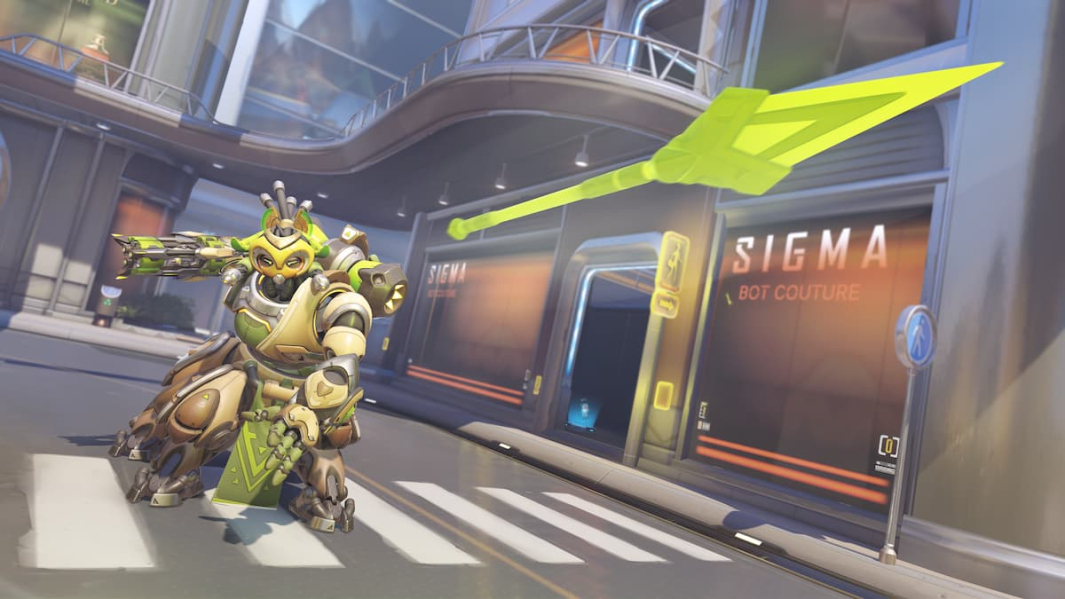 Hey everyone, today I’ll cover Orisa, the Numbani Guardian from Overwatch 2 that had a massive rework since Overwatch 1. An overall excellent tank hero that you will surely dominate with after following my tips and tricks below.

In case you don’t know, I’m a professional Overwatch 2 booster here at Boosting Factory and Orisa is one of the tanks I often play when boosting Overwatch 2 accounts.

Orisa’s LMB fires an automatic projectile gun that does sustained damage at 6-12 per bullet, dealing more damage the closer you are. It doesn’t have an ammo/reload mechanic but rather an overheating mechanic. On the center of your screen you have a heat meter, meaning you can shoot until the meter is full, at that point it overheats and you need to wait for it to cooldown. What’s good is that you can get close to overheating, stop for a bit, and resume firing, this way you can have almost non-stop firing uptime without ever overheating. You can actually fire for 5 seconds before it overheats but it’d be silly to watch the heat meter or count to 5 all day long so basically you will learn with time by feel how long you can fire and not overheat it.

By right-clicking Orisa throws an javelin that stuns and knocks back the enemy it hits. It does 60 damage and 40 more if the enemy hits a wall after being knocked back. Both initial and wall stun are super short but enough to interrupt abilities and ultimates, it can also knock people from the map which is amazing as you probably know.

It can be absorbed by D.Va’s defense matrix, Sigma or deflected by Genji.

This is Orisa’s generic but very tanky ability. When you use Fortify you:

When you activate your Javelin Spin you:

It feels like a mini version of D.Va’s matrix. You will mostly use this when pushing through narrow doorways, pushing melee heroes and basically trying to just get through someone to get somewhere.

Orisa’s ultimate makes Orisa stop and channel an ability while gaining 125 overhealth during the channel dealing 15 damage during channel and then once it finishes another 60-500 damage in an area depending on how long you let the ultimate charge (up to 4 seconds). It also reduces enemies’ movement speed by 30% during the channel if they’re caught in the 9 meter range. You can press primary fire to release the channel before the 4 second mark to deal less damage.

During the channel you will see on your screen the percentage which is exactly how much damage you will do, if it says 300% you will deal 300 damage.

Now that we’ve covered her abilities lets talk about her pros and cons.

I believe Orisa is reworked amazingly from Overwatch 1, she now does her role really well which is making space and frontlining for your team. She has two tanky abilities, one literally reduces the damage you take, and the other one does the same but in a bit different way while allowing you to push forward.

She also has the Javelin which allows her to be a playmaker too, while dealing decent damage with her primary. She became a well-rounded tank.

The con is that she has low mobility. She can push, don’t get me wrong, but if needed to run away or something, nope, she’s done. She also can’t reach high-ground, meaning that she’s quite weak versus enemies who poke her from high-ground just like Junker Queen.

Therefore do not take her on maps with lots of high ground and versus mid and long range based teams.

1. You can use your Javelin Spin to push enemy tanks or any other hero into your team. When fighting them get into their face and behind them, pop the ability and push them into your team. Make sure to ping them and call it on voice so people notice what you’re doing.

2. Focus on enemy squishies with your ultimate, not tanks. Similarly with how D.Va launches in and pops her ultimate, once you can secure a group of at least 2 of enemy squishies together, usually a healer like Zenyatta and Soldier:76 or something like that, hit them with the ult and use it earlier if they’re close to escaping. If you do that to a tank or a melee, they will most likely just run away or survive the weaker blast that you activate earlier.

5. Don’t just shoot your primary at all times for example during D.Va’s matrix or Genji deflect, this is a general tip not just for Orisa but yeah just so you know.

6. Try to anticipate enemy damage to use Fortify. Don’t just use it when you’re low and like oh shit. Try to use it when you know that you’ve pushed too deep for a good or bad reason, be aware of the situation and use Fortify to reduce the damage you take while you’re still good and high in HP. It will help your healer and it will allow you to secure the fight when your healers are not panicking trying to save you.

Since the tank matchups are quite important in Overwatch 2, you need to know how you handle every tank, so let’s dig in.

I hope you enjoyed my Orisa guide and that it will help you progress. I would like to take a second of your time and tell you about our Overwatch boosting services. My colleagues and I can help you reach any SR in Overwatch, do your placement games, and even Top 500. You can play with us or we can play on your account. It is of course, risk-free with over 2500+ positive reviews.