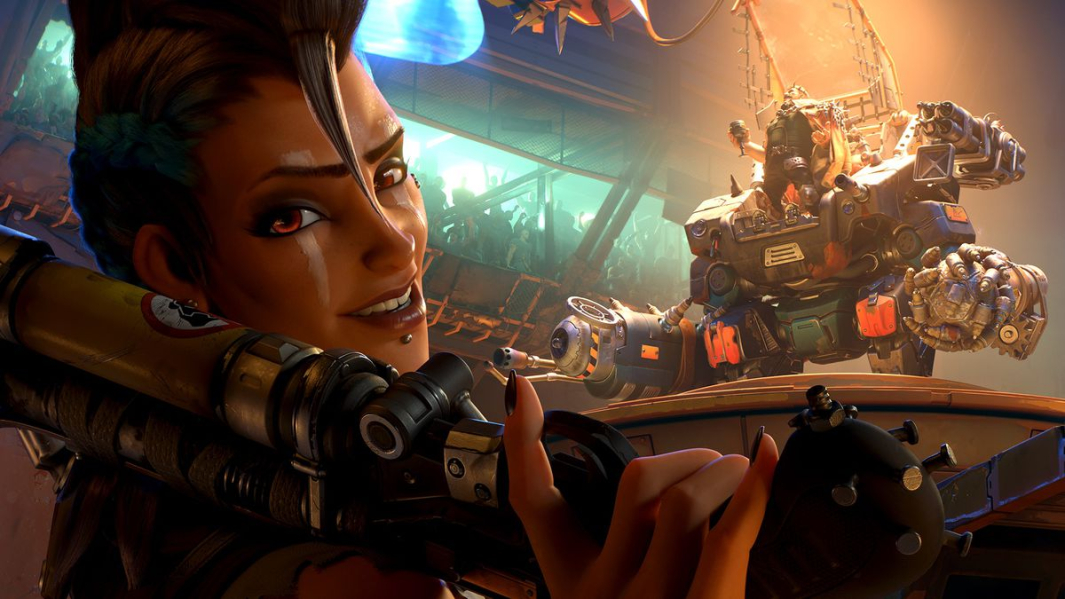 Hey everyone! Today I’m going to be telling you about Overwatch 2’s Junker Queen. She’s one of the heroes that arrived with the release of OW 2 and is a tank hero.

She feels like Brigitte but with a shotgun. She’s not only tanky, but very fun to play and almost feels like a DPS hero. Her survivability actually depends on how much damage she deals.

Since I’m a professional Overwatch 2 booster here at Boosting Factory, I had to learn and master Junker Queen in-depth so I could play her during my boosts for clients, and against her when she’s not on my team. Today I’ll teach you the same, don’t worry, it won’t be long. So let’s dig in!

Let’s start by breaking down her abilities and giving you tips on how to utilize them properly. Starting with her passive to understand the major mechanic behind Junker Queen.

Junker Queen heals herself from all damage done by her “wounds”. Wounds are damage over time that she leaves on enemies with her abilities.

Her primary fire is her iconic shotgun. It deals 80 damage in total if all pellets hit, that is, 8 per pellet. She can spam one shot every 0.8 seconds and has 6 ammo. What’s different about this shotgun from other shotguns in the game is that the pellet spread is much tighter, meaning she can poke from a further distance.

Junker’s Jagged Blade allows her to throw a blade in an arc that can be recalled if pressed again. It does 80 damage and another 15 damage over 13 seconds with Wound. This also means that she heals for 15 health over 3 seconds.

The cool mechanic here is that the blade when the blade either automatically after 3 seconds or upon activation comes back like a boomerang, it will damage any enemy hit again and even pull them back to you. In case you hit the enemy the first time, it will be stuck in them and come back after 3 seconds or earlier if you reactivate and pull them towards you.

It’s on a 6 second cooldown, therefore you should be spamming it as much as possible whenever you see an enemy, don’t worry about saving this ability or trying to make insane plays pretending you’re a Roadhog. Just use it to deal maximum damage and heal yourself most of the time.

Carnage is Junker Queen’s second damage ability that swings her axe in front of her and deals 90 damage to anyone hit, and Wounds them for 40 damage of 3 seconds, also healing her in the process. It has a little wind-up animation so take that in note when trying to use it.

A combo where you hit the Jagged Blade, pull them back and press the Carnage swing just so it hits them in time when they arrive at your location via the pull, following up with melee or a shotgun.

It’s worth noting that Junker’s melee deals decent damage and can be used as a finisher on squishies.

Commanding Shout is not a damage ability but it rather increases health of your allies by 50 in range of 15 meters, and your health by 200, while also increasing everyone’s movement speed by 30%, all for a total of 5 seconds. Note that this is not a heal, it actually provides your character with more health, that can be filled up by a healer within those 5 seconds.

You will most of the time use this as a defensive ability, but many times also during a push in order to secure a team kill.

Rampage is Junker’s ultimate ability. It allows her to charge ahead, deal 100 Wound damage to all enemies on the way while also healing her, and running through them, and not pinning them like for example Reinhardt’s charge does.

The key to this ability is not only to hit as many as possible but to also measure the endpoint well. If you end up in the middle of their team, you’re probably screwed. If you end up behind them, much better. Ideally also have Commanding Shout ready so you can survive and follow up on your ultimate and not just die behind the enemy team with no real success.

How To Play Junker Queen

Maps that don’t have a lot of high ground and are very linear are good maps for Junker Queen such as King’s Row and Colosseo.

You should be playing with heroes that like brawling such as Lucio, Moira, Genji, Reaper. Play corners and avoid being spammed from long range so you can be full and ready to engage. That’s your main difficulty, don’t get poked from afar because there’s nothing you can do about that, you must be able to get into their faces.

Thanks for reading my Junker Queen guide and tips and I hope you learned something. Don’t forget to check our Overwatch 2 boosting services where one of my colleagues or I can help you get any rank you want by playing for you or with you on your account! Don’t hesitate and get in touch with our pro players today.