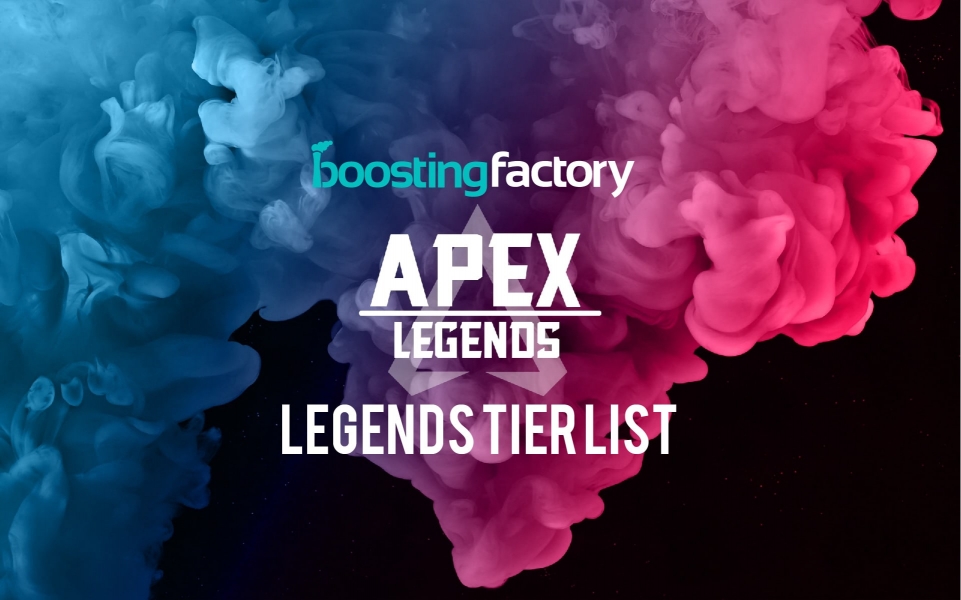 Hey everyone, today I'm going to show you the best Apex Characters to play in order to reach your dream RP.

I'm a pro player here at Boosting Factory, knowing the best legends is a part of my job and today I'm going to share some of that knowledge with you.

Below you will find the Apex Legends Tier List in image format and an explanation for why is each hero placed in each tier. Note that the list is valid for PC, XBOX, and PS4. Let's dig in!

Fuse has been added in Season 8. He's a very aggressive double offensive ability character that excels in late-game small circle plays and zoning other enemies with his abilities that are quite long range.

Horizon has been added in Season 7 of Apex Legends and while she is truly fun to play with a lot of opportunities, after getting some buffs she is now actually arguably S tier, A at worst.

Rampart was introduced in Season 6. She strikes a decent balance between fun to play and useful, while I believe she's quite situational and therefore not an amazing legend, she can still be viable and played if you like her playstyle.

Loba was introduced with Season 5. She is a legend who can quickly reposition with her tactical, however, the ability is not that great as it sounds due to slower movement speed, animation playout before and after teleport and inability to fire during the flight of the teleport disc.

Her ultimate and passive are focused on looting and not actual gunfights, therefore, I don't believe she's peak meta right now and I've placed her low tier for now as balanced. I will revisit if needed.

Pathfinder has been S tier from the very start of Apex Legends. Initially, his hitbox was bugged and he was quite hard to hit, the developers have since fixed the hitbox bug but many players would argue that he is still too hard to hit - even the developers recognize that so they implemented the Low Profile trait which increases all damage taken by 5%.

His great mobility is what made him S tier, short term mobility in form of his grapple which gives him the potential to change location fast and escape when needed. His ultimate provides him with the long-range mobility for both him and his team. He is definitely one of my favorites to play when I'm doing an Apex Legends boosting order.

However, with Season 5 he was nerfed just like I expected, his grapple is now on a 35-second cooldown which allows him to reposition maybe once or twice during a fight making him seriously weaker. He's still decent though and in A-tier.

Just like Pathfinder, Wraith has been S tier since the launch of Apex. Her hitbox has always been small due to her size, she was also nerfed with the Low Profile trait (5% increased damage).

What keeps her in S, or at least A tier is pretty much that she’s still quite hard to hit, has an arguably quick escape from all damage with her tactical ability, however, she cannot open doors to hide while she’s in the Void and enemies can see where she is moving while she’s phased, meaning that if you don’t hide before the ability is over you can be killed easily.

Her ultimate ability provides her and her team with a quick escape or simply a reposition to a more favorable location, which is especially useful in the late game when the circles are getting smaller and you need to secure the best location for your team.

Bangalore is, in my opinion, a balanced legend. Her hitbox is fairly sized and she does not have a Low Profile trait meaning that her damage taken is not increased.

Her tactical ability is a smoke grenade of which she holds 2 charges. A smoke grenade is extremely useful for her and her team to relocate safely, especially in the late game, or simply to escape a dangerous situation when under fire.

The ultimate ability is an airstrike that allows her to drop a series of rockets on the ground, which is very useful as a zoning tool which enables her and her team to either push the enemy team out of a certain location or escape from an enemy team that is chasing her or her teammates.

Her ultimate needs buffing because it's currently very underwhelming.

Crypto is a legend that requires a different playstyle. Coordination and strategy are more important than pure mechanical skills. When you properly utilize him, you can gain an incredible advantage over reckless teams who rely solely on their mechanical skills.

Crypto’s tactical - the drone, allows you to scout for enemy teams, loot boxes, traps, pick up banners of dead players, open doors or even get info about nearby squads when you place the drone near the big posters that are showcasing players.

However, Crypto needs a team to play around him in order to be useful, just like Wattson, therefore, not a great choice for solo playing, but a very good choice for a trained squad.

Also, her heal drone is now destroyed within 2 ticks of the circle so she cannot use the outer circle and camp during the first two. The circles are also doing more damage than ever before.

She still makes a great addition to pretty much any team due to her heal drone and ultimate ability that provides the team with loot. Her passive, however, is one of the best in-game allowing her DOC to resurrect friends while Lifeline can keep fighting.

Gibraltar has been buffed throughout the patches and is now very much playable. In competitive he's a definite S tier due to buffs to his Dome and shorter cooldown on his ultimate that not only allows zoning but also heavy damage to players hit.

His hitbox, unlike Low Profile legends, is quite big which made him unplayable for a decent time since the launch of Apex Legends. It’s not usual for characters to have different hitboxes in an FPS game, especially when the hitbox is larger than the rest of the roster. Therefore, Gibby has been given the Fortified trait which reduces his damage taken by 15%.

His passive ability is a shield that triggers when he’s aiming down sights and can block up to 75 damage, which is similar to having a second blue vest on yourself. It’s worth noting that the shield does not have the Fortified trait. He kept getting buffs and now you can heal, shield and resurrect faster inside the dome.

Octane has been an average legend since he was released. He fits any rush composition due to his high mobility from his tactical ability. However, the developers recognized this and heavily buffed his ultimate. His ultimate ability - jump pad, gives both him and his team some mobility and ability to relocate defensively or offensively. He is now in quite a better spot.

He is quite good for solo modes and uncoordinated teams because he can capitalize on rushing and relying on the element of surprise combined with a close-range weapon loadout.

Wattson was imagined as a legend that counters aggressive teams who prefer to rush and take advantage of slow players, something like Pathfinder, Wraith and Octane composition.

However, in order to utilize Wattson fully, you need a very patient team and coordination, which many teams simply do not have. She is arguably S tier when played in a proper composition and coordinated players.

Her fences allow her to make a little bunker inside any, preferably closed area which slows and dazes players who pass through them. Her ultimate ability compliments the tactical ability by denying any grenades (including your team’s) and airstrikes. and slowly recharges shields of any friendly or enemy players in the range of it.

Mirage was finally reworked in Season 5 and his clones are now useful, he also becomes invisible when resurrecting a teammate. However, his kit is simply "fun" and not extremely useful against good players.

Bloodhound is the biggest underdog to god transition, continuous buffs to him throughout the season made him a beast. He now brings amazing utility to his squad both in solo and competitive play.

Caustic was buffed with Season 5, his gas doesn't slow the teammates anymore and it made him a great choice that's not fun to play against, if not more than that in high-tier competitive play.

Revenant was seriously under tuned on the release but got buffed in the recent patch, he is no longer Low Profile, he now has 2 silence charges and they were extended to 20 seconds, his ultimate has no range and so on...

He went from an underdog to a great choice due to latest buffs.

I hope you enjoyed my tier list and that it will help you reach the rankings you dreamed of. However, if you still need a little push to reach your desired RP or get those badges you always wanted, check out our Apex Legends boost services and order today, I'll be waiting! :)