The Best Overwatch Baptiste Guide By a Pro GM Player [2020] 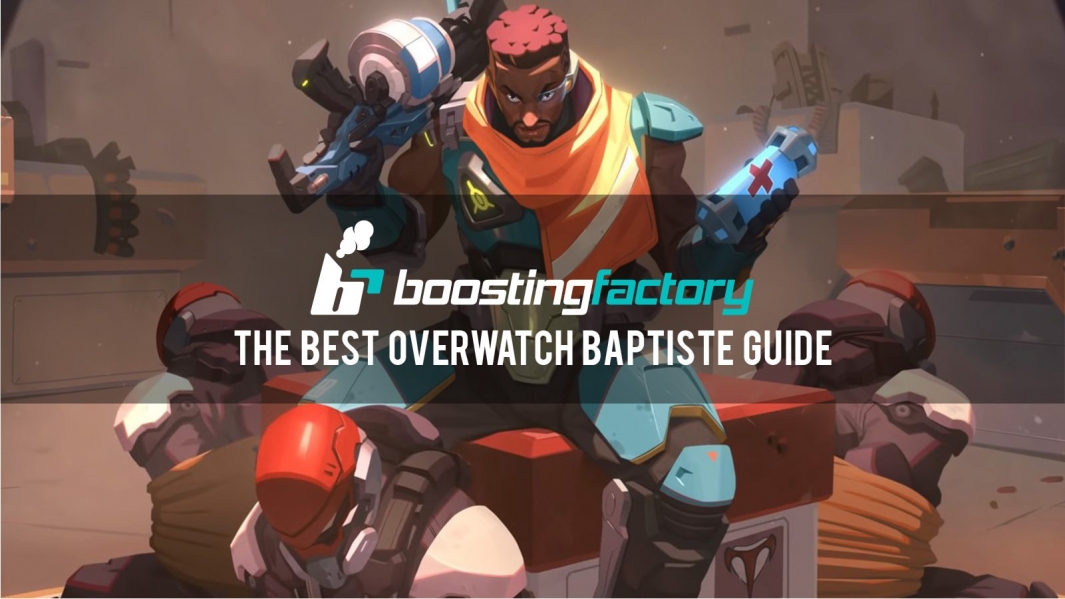 Hi! My name is JoeTheFisher and today I’m going to write about Baptiste, the Overwatch healer that’s incredibly good if played well. At the time of writing this guide, he’s a definite tier 1 on an Overwatch best heroes tier list, make sure to check how is he doing regularly as we update the list every patch.

My colleagues and I at the Overwatch boost squad here at the Factory often play Baptiste when a support order is required, we’ve reached Top 500 as Baptiste multiple times and I’m going to share my knowledge with you.

Baptiste is capable of awesome burst healing and sustained healing, his Immortality is an insane ability, one of the best in Overwatch for sure, capable of trading versus multiple ults on the enemy team.

With his primary fire, he can do a great amount of damage and even pull out some cool solo plays. Let’s talk about what you can do to optimally use Baptiste.

As I said, he is capable of some nice burst healing, around 60 per hit (subject to change in future patches but the point is still there!) with splash and if you add his Regenerative Burst it can go as high as a 100. All this means he can heal a group of allies quite fast and out sustain a lot of damage.

Enemies will often underestimate how hard is it to kill a tank you’re pocketing actively. A general tip would be that if there’s huge sustained damage being dished out at your team, heal through it, Baptiste is capable of sustained healing by spamming his heal grenades.

Bap is capable of getting his ultimate up very very fast allowing him to turn the fight around. Using the Matrix correctly is one of the primary imperatives, you can increase your healing, but that’s not what you want to do most of the time.

Maximizing the damage your team can output during the matrix is what you want to do, especially if you’ve charged up the ult before others. Focus on choosing the best placement for your matrix by thinking who can use the Matrix the best and place it where you expect the fight to begin or transition to.

One of the things you can do when using the Matrix before others have charged up theirs is shotcalling that you will use it so your team can prepare and combo their abilities to maximize the value. For instance, Reinhardt’s fire strike can nearly one-shot many squishies if it goes through the matrix, Hanzo can do his Storm Arrow, Ashe’s Dynamite and so on...

Using the Matrix for yourself

You can use it to try and secure an important kill, if you think somebody is going down and it’s crucial that he does, using it offensively and shooting through it to get that target down could just be worth spending your ult charge.

For example, a Widow or Hanzo spamming at you from high ground, or a support out of position. As a matter of fact, your DPS through the Matrix is better than Soldier 76’s DPS.

Bap’s damage is not to be taken lightly, he obviously doesn’t dish out like a real DPS, but he’s not to be ignored when you’re a skillful shooter. However, many Baps get carried away and DPS too much instead of healing, the optimal way of playing is keeping your team up, then dealing DPS if there’s time. Not the other way around.

This amazing ability that allows you to super jump similar to Mercy allows you to position yourself on high-ground whenever you want. Even jumping and healing constantly isn’t a bad idea since Bap’s healing comes in the form of a splash, unlike Ana, it’s much easier to land heals.

It’s also easy for him to escape enemies who try to punish him. Any enemy who can’t close a high-ground gap easily will fail at chasing him. The ability has no cooldown, you can spam it whenever you like, meaning, you can jump to high-ground, if the enemy is chasing, jump down, after he follows, jump back up.

This ability is arguably one of the best in Overwatch. It literally makes everyone in range of the lamp IMMORTAL, as long as the lamp isn’t destroyed. This means stopping the ults like Grav Flux, Hanzo’s dragon and so on… yes, all of them.

Let me give you four tips on how to master using the immo field.

By placing the lamp behind a cover, a wall, a rock, a car, wherever, while still being in its range, makes it nearly impossible for the enemy team to destroy it without exposing themselves too much. Meaning that a well-placed lamp will make your team immortal for 8 seconds.

This allows your teammates to focus on dashing out as much as DPS as possible because they know they won’t die.

2. Use it after a true engage

Using the lamp too early, before the enemy team actually commits will result either in a disengage, or them using the abilities just to destroy your lamp and make it obsolete. You need to use it after they dashed out some of the abilities and committed to an engage, similar to how Lucio uses his ult.

Remember that the lamp won’t actually heal anyone, but nobody will be able to drop below 40 HP.

Imagine your team being pumped down, but you’ve learned that you need to use it in a right moment, you use it and the team is still scared and the value is gone, that’s not what you want.

You want to call that you will use the lamp so they can keep being offensive and actually turn the fight around instead of just trying to survive when they’re actually immortal.

4. Use the lamp to block ultimates

This is a hard one, you need to learn how to think like the enemy players and predict when will they use the ultimates, most often when your team is low and they want to secure the kills. But oftentimes they will use them to actually engage, such as using a Grav Flux on your whole team.

If you use it right the beginning of the Grav Flux, they will have time to shut down the lamp, but if you use it right before it ends or your team is about to die, they might not have the resources to shut it down. The same applies to Genji’s ult. With time you will learn how to use the lamp as one of our pro Skill rating boost members.

1. Before you engage, you can shoot the healing splashes high in the air so they fall down on top of you during the fight for little extra healing.

2. When you want to jump with your Exo Boots, release crouch just before actually jumping in order to avoid losing your forward momentum.

3. Regen’s effect will not be canceled with EMP, therefore use it before an EMP goes off.

4. This might be a personal preference, but go and disable automatic reload from Baptiste’s settings because if you empty out your healing magazine, you might still want to DPS with your secondary DPS magazine.

5. When healing with your grenades, aim at allies’ feet to maximize splash healing onto other allies, aiming directly at them is less efficient.

6. Keep in mind that Regenerative burst is the only tool you have to heal yourself.

7. When you charge up your Exo Boots, it allows you an extra second to decide do you want to jump or not, use this to play mind games versus the enemies.

8. Practice dodging Earthshatters and Grav fluxes by jumping away with your Exo boots, just like you should practice placing the immortality fields in the air.

9. Typically, try to use Regenerative burst to get your team healed up before you place the immortality field.

10. Versus a Sombra, aim to use the lamp in the air by jumping with Exo boots, or hide and use it as soon as the EMP is off.

11. BONUS TIP FOR HIGH SR GAMES: A common trick in High SR games on Baptiste to win the ult charge battle is to tell your tanks to lower their shield and just soak damage while you put the lamp in a defensive position around the wall. By doing this, you ensure that you will be the first to get Amp Matrix and can, therefore, have an easier time pushing through a choke like on Hanamura point A. If the opposing team does the same, you can tell your team to not shoot at them at all while they have lamp up and they won't benefit at all.

Baptiste’s positioning is actually pretty forgiving due to the Exo Boots. If you fail at positioning it’s not the end of the world, however, having perfect game sense is what’s required to master Baptiste.

Knowing exactly when to use your cooldowns and where to place them is what differs a good Baptiste from a bad one. With practice, I’m sure you will become a great Baptiste. Consider ordering some Baptiste coaching with our Overwatch coaching squad or some duo Overwatch boosting where you can play Baptiste with our boosters in a team and they can give you some tips while actually increasing your Skill Rating.

This page was generated in: 0.70 seconds.