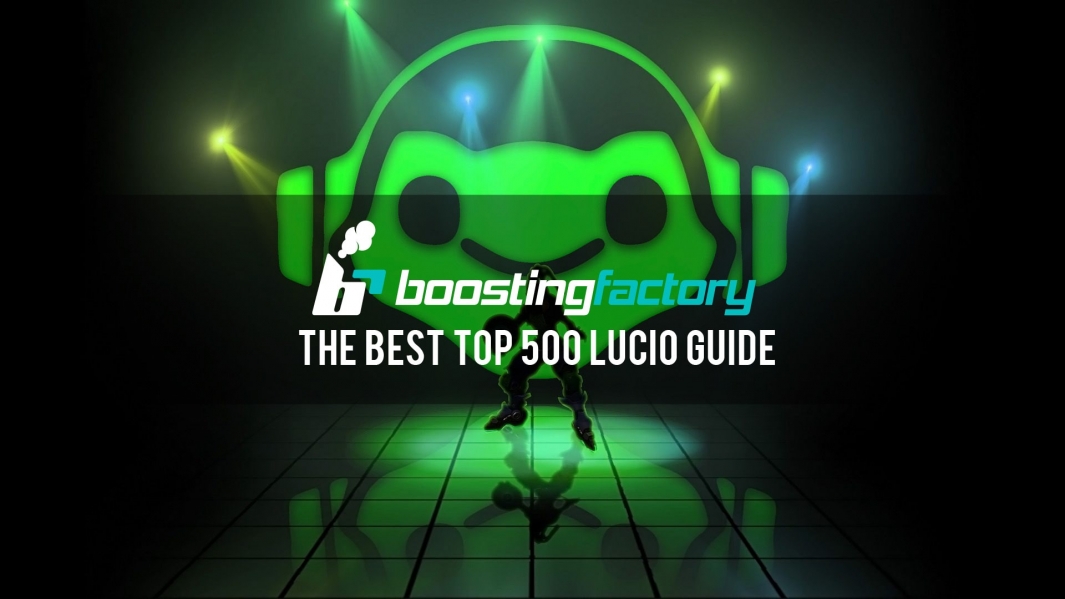 What’s up my Lucio mains? Today I’m going to teach you exactly how to play Lucio as a professional player does. Here at the Factory, we often use Lucio to do an Overwatch boost when a customer wants a support role played.

Lucio’s been used throughout the Overwatch history quite often, even when he wasn’t Tier 1 in the Overwatch tier list. I myself am a Top 500 Lucio player and I’d like to share some of my “wisdom” with you. :)

Not to waste more time, let’s dig into the basics because, in order to become a pro, you need to learn the basics, right?

The boop’s damage is not significant, only 25 damage with a max range of 8 meters, the cooldown is 4 seconds. It’s worth knowing that it doesn’t eat your ammo like primary fire.

However, as you probably already know, the boop is used to, well, boop people, not deal damage.

In healing mode, allies close to you will get healed, including you, however, you heal yourself less than your team. The same is not valid for the speed mode, you all move faster equally.

Amp it up will increase your healing ratio or speed, but it’s on a 12-second cooldown. Therefore being careful with using it wisely is very important.

Let’s break it down! The famous quote after Lucio uses his ultimate will grant everyone around you in a 30-meter radius a 750 HP shield that can expire. The ability works even through obstacles if you have been in a line of sight with them in the past 0.5 seconds.

The duration of the shield is only 6 seconds, it needs to be used when you expect incoming damage.

This ability is amazing because it allows you insane mobility, whether you’re healing or speeding your team up. However, you will move faster if you’re in speed mode. This is an extremely hard ability to master and it will take a lot to master it. The possibilities are endless.

I’m going to break down the playstyles into three categories, from worst to best.

This playstyle is most often found in the lower tiers such, up to Platinum and maybe Diamond. What these Lucio’s do is essentially they stick around in healing mode most of the time which in my opinion is not the greatest playstyle and you should only do it as an absolute beginner Lucio.

This playstyle is not optimal because speed is a better mode than healing. I don’t mean to say NEVER HEAL, on the contrary, you need to heal. But, in a team fight if you simply stick in healing mode, you will not outheal an enemy Ana, Mercy or Moira.

These Lucio players are the complete opposite of healer Lucios. They keep switching from healing to speed as they should, but they also front-line quite a bit with the tanks in order to pull an engage faster, which is a great strategy if you can pull it off.

They also like to pick up easy kills such as on enemy Widow when she’s exposed and alone, which is also a great strategy but requires a lot of expertise.

A shot-caller Lucio is the hardest but also the most rewarding playstyle. It requires leadership skills, good voice communication, and spatial awareness.

This playstyle can be hard for lower tiers such as Platinum and lower, so I suggest you play Aggressive playstyle there in order to pick up some kills and carry your team.

Just like I mentioned in the playstyles section, a healer only Lucio is not maximizing Lucio’s potential. You cannot outheal many other supports and you cannot keep everyone in the range at all times in order to heal them.

Speed is very useful for engaging, disengaging, flanking and peeling. As an example, let’s say a Genji dives your backline, do you think you will outheal him in healing mode? No! You must use the speed and amp to get the backline out of the way as fast as possible.

Or, for instance, speeding up your slow as hell Reinhardt so he can catch a good position in the front-line or engage. How many times has an enemy escaped a free kill just because you couldn’t close the range? Speed is the answer.

Become a Bodyguard For Your Supports

Since we established you will mostly use speed rather than healing, you need to focus on being a bodyguard for the second support in your team. When an enemy flanker or dive hero attempts to kill your second support, you need to keep an eye on it and try to peel for him. Speed him out, boop the assailant or even ult if necessary!

Even if you don’t manage to save him, you will do your very best in order to delay the kill as long as possible so the assailant is away from the real action for as long as possible, or until someone from your team comes up and saves you guys.

It’s worth mentioning that bad players who are terribly out of position cannot be saved and you should not spend time trying to save a dead man walking. You will with time have a better feeling when it comes to deciding who to try and save and who to just leave and focus on the rest of your team.

Many Lucios forget that even though they have insane mobility, they are still a squishy hero that can get killed very very fast. You need to stick to walls and covers and never stick out in the open for too long.

In case you’re playing a deathball comp, a general idea is to stay in the middle of your team to have everyone healed and sped up. However, in a dive comp, you will need to pick sweet spots and play by intuition and wisdom when is the time to help the divers and when to peel for the backline. Same is valid if you’re against a dive comp.

I know you’ve probably seen tons of insane Lucio clips where he boops 5 people off the map. However, you must not waste your time trying to attempt this, those are one in a thousand situations that luckily got recorded.

Boops are used efficiently when you save a teammate from a Roadhog hook, Mei’s combo or Rein’s pin. Boops are good when you boop an enemy into your team or range for a kill.

A more advanced boop tip is combining melee with the boop for a nice little burst if they’re close enough. Or for instance, booping enemy Reinhardt upwards or sideways so your Rein can get a good shatter.

Boops can obviously be used in a million ways and only practice will help. I suggest practicing with one of our Overwatch coaches who main Lucio and can help you a lot with them.

Don’t use Amp It Up Recklessly

Amping is not an ability used just for fun because it’s off cooldown. It’s a very long 12-second cooldown and being strategic when it comes to using it is crucial.

Using it at the wrong time can mean the difference between a won and a lost team fight. A good Lucio will need to decide whether he uses it during a team fight to heal or speed out and disengage. A good Lucio will use it when an engagement has been decided as the way to go.

Using Amp during Soldier’s, McCree’s, Zarya’s, Rein’s or Roadhog ults is a good idea. Whether it is to heal them up or allow them to escape. Speeding your team through a choke point where they’re likely to get attacked is a good idea, but you need to tell them where are you moving so they don’t waste it.

Using the Ultimate Properly is Key

I can break down the usage of your ultimate in four main categories:


Many players hold the finger on the ult like a finger on a gun trigger. Popping it recklessly as soon as they hear Genji’s blade or Soldier’s visor. That’s a no-go. First of all you don’t know is that enemy going to die immediately, he might even be in the last 2-3 survivors and all it takes is your team to clean them up, and maybe you won’t even need the ult in a full-scale 6v6 fight. Use it only when needed!

Of course, if you know most of the enemy team has ults ready, you will naturally use sound barrier to counter them or sustain your team. Just don’t use it randomly. A good tip is that when you’re against Sombra and she has EMP ready, hide until she uses EMP and then pop the beat.

Practice on using your sound barrier as a tool to counter the enemy momentum, not just when your team is dangerously slow and scattered, when you know a buttload of damage is incoming, pop it to counter that push and regain positive momentum.

And make sure to remember that ult only gives a temporary shield, after it expires, if your team is low HP, they’re prone to dying, you also need to heal them up.

I hope you enjoyed my Lucio guide and that it will be of great benefit to you. In case you’re still struggling with increasing your Skill Rating, check out our Skill Rating boost service and get yourself a piloted or duo boost where you can play Lucio and our boosters can give you tips on the way!