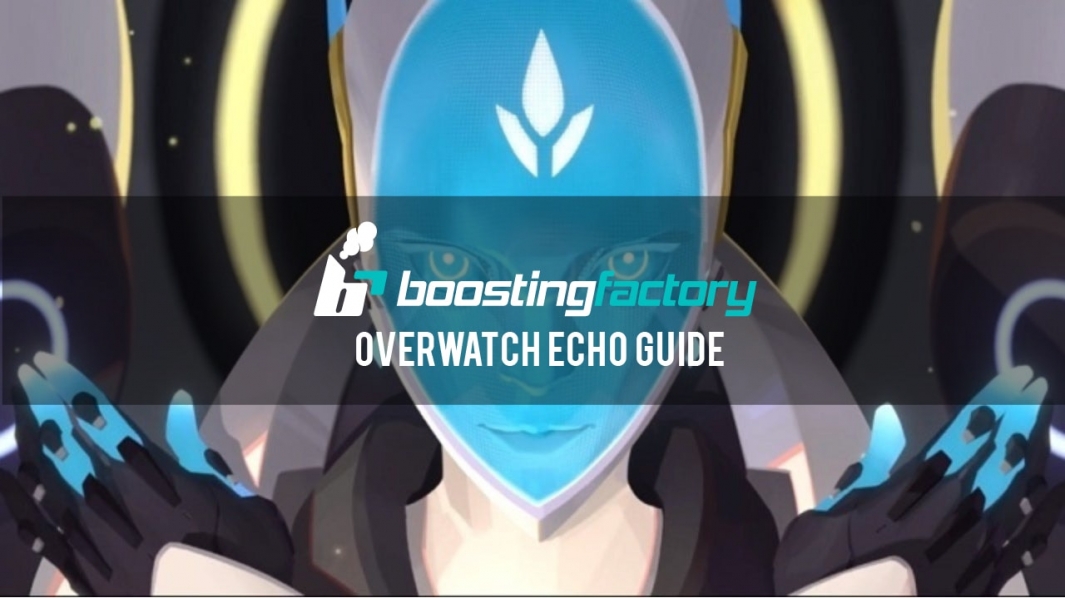 It’s finally confirmed, the new Overwatch Hero 32 is Echo! We predicted it in our Who Is The Next Overwatch Hero post recently, so check it out for further predictions.

As a member of the Overwatch boosting squad here at Boosting Factory, I have to master Echo to be ready for my job on the first day she hits live servers.

We’ve first seen Echo during the McCree’s cinematic “Reunion” back at Blizzcon 2018. Later she showed up in the Overwatch 2 cinematic “Zero Hour”. We thought she’s just a regular Omnic who McCree saved and she became the good guy, but there’s more…

The origin story that the Overwatch team has shown us reveals more. Turns out Echo was an Omnic creation by Dr. Mina Liao. She was the sixth mysterious Overwatch founder.

Dr. Liao helped created the Omnics and had to watch her creations go into war with great sadness. In order to repent herself, she joined Overwatch and created Echo.

Echo is a very advanced Omnic AI that learned from Dr. Liao and picked up on most of her characteristics. After Dr. Liao died in an attack on her lab, Echo remained and she is now a true echo of her creator.

When you activate Flight, Echo dashes forward and then launches in the air to fly and move as you wish. The ability lasts for 3 seconds and is similar to Pharah flight. You have more control over your flying but less uptime than Pharah.

When Echo is falling, by using Glide she can act similar to Mercy but Echo can move horizontally and falls much faster than Mercy.

Echo's primary fires 3 little shuriken/stars similar to Genji. She has 15 of them available before she has to reload, and they can headshot for extra damage.

They are very spammable but not dealing a lot of damage.

Sticky bombs are a volley of bombs that Echo fires. When they stick to the target (or any natural obstacle), they explode shortly after.

If you land all six of them, the damage is over 200 which is enough to one shot, however, it's not that easy to land them all and due to the delay in explosion, enemies have a little time to react and mitigate.

Echo channels a beam for a short duration and damages enemies, however, if the target is less than 50% health, it deals a lot more damage. This not only works on heroes but on shields, Mei walls and so on. This ability is most damaging to Tanks due to their large health pools and the possibility of bursting them down.

Therefore, use this ability as a finisher, not a starter of the burst / combo.

Echo's ultimate allows you to select an enemy and completely transform into him. Meaning you get all of his abilities and much much faster ultimate charge time.

If you die before the ability expires, you will transfer back to Echo with full HP. She can also use the interface to select the target for her ultimate similar to Ana in order not to duplicate the wrong target.

It's possible to only have one big ultimate on the field at once (for instance Amplification Matrix) but you can put out multiple spammable ults such as Tracer's bombs.

Strategy - How To Play Echo

Do not use flight in order to engage, everyone makes this mistake and just ends up stranded with no escape. You're not Tracer, Tracer can afford such moves, but not Echo.

I don't suggest you play Echo as a flanker, sometimes, yes, but generally not. Play with the team and punish people out of position or simply follow up on people that are low HP like a regular DPS. Don't overextend into the backline unless you have flight ready.

A similar playstyle would be the one of Doomfist, essentially dropping behind the enemy team, picking up the kill and flying out to safety. Versus good teams, they will eventually figure out that you're picking off people out of position and start playing more tighter, in that case, you need to adapt your playstyle instead of dying to pick off a tight team.

This is the time when you should start ramming tanks, you can actually do amazing damage to tanks, for instance, when the shield is under 50%, you do a lot more damage to that shield as well, not just HP of enemies! You will do this easily by flying onto high grounds and doing it, or just flying above tanks, however, be careful vs hitscans.

Apart from copying tanks to get an "extra life", I suggest you copy high burst heroes or heroes with low-cost ultimates so you can spam them during the ult. Therefore, Doomfist, Reinhardt, Tracer, and McCree are ideal targets. Copying, for instance, Zarya will be completely useless.

If your team had just lost a tank and they don't have a Rein to clone, it's ok to clone something else in order to act as a tank. An even more advanced situational strategy would be to transform into Ana at a crucial moment and deny healing on top of the enemy team mid-flight. Or for instance to transform into Baptiste in a crucial moment to pop immortality field on the top of your team to save them from certain death. The possibilities are endless.

1. The standard DPS combo would be Primary fire > Sticky Bombs > Focusing Beam. Her damage isn't high unless you combo it this way.

2. You want to Duplicate an enemy with a strong ult because you charge it so fast and go ham with it.

3. Duplicating tanks is a great idea because you basically have a free life and can go in aggressively to set up a play or space for your team.

4. You can use duplicate if you're fast enough just before you die to save yourself, no matter which targets if it means you live.

5. A nice trick with Fly is that you pop it, get the instant dash and then cancel it not to Fly in order to hide, dodge and juke enemies.

6. Fully utilizing Fly would be for instance jumping off the map, flying around the obstacles and flanking the enemy team from the side or behind, the possibilities are endless. Basically out-angle the enemy.

7. In order to avoid headshots, simply look down and turn your back to the enemy, your head will be nearly invisible for them.

8. You can easily cancel the beam ability by just pressing the beam button once again. You do this in case you see you can't confirm a kill and you need to do something else.

10. To cover more distance when trying to dash in a certain direction, hold space or jump key on console right when you press flight.

I hope you enjoyed my Echo guide! Make sure to check out our Overwatch boosting services in order for our professionals to help you out with boosting your SR, placements, Top 500 and much more.

The services are extremely safe, fast and fully anonymous. Don't hesitate to get in touch and we'll help you out immediately.