Hey, hey! Our Overwatch boost team has decided to release this guide for free so all of you can get a good grip on Brigitte in a couple of minutes. Brigitte is a new, second in a row tanky-support hero, the 27th addition to the Overwatch roster. We've had teases from Jeff Kaplan on the forums, some images of schematics and now we have Torbjorn's daughter in full. Why do we say she's a tanky-support? Her specialty is armor, she can throw Repair Packs to her allies, damage enemies with a long-range Flail weapon. On top of that, she has a Barrier Shield which is her defense mechanism while she swings at enemy players in the way. Meaning she can keep the frontline and heal the team at once. Check out her rank on our Overwatch Ranked Tier List.

Brigitte's melee weapon has an extended range, enabling her to strike multiple enemies with a single swing.

Brigitte throws a Repair Pack that can heal an ally. Any healing over that ally’s maximum health provides them with armor instead.

Brigitte throws her flail a long distance, dealing damage and knocking an enemy away from her.

Brigitte deploys a frontal energy barrier to absorb a limited amount of damage.

Once her Barrier Shield is deployed, Brigitte can dash forward to stun an enemy.

Brigitte moves faster and provides all nearby allies with armor that lasts until it’s removed by damage. 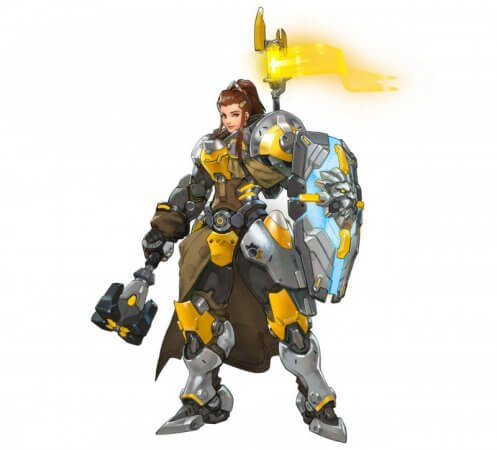 I hope you enjoyed reading our guide and good luck with playing Brigitte! If you want more advanced lessons on Brigitte to truly master her, check out our Overwatch Coaching section and find a coach that suits your needs.