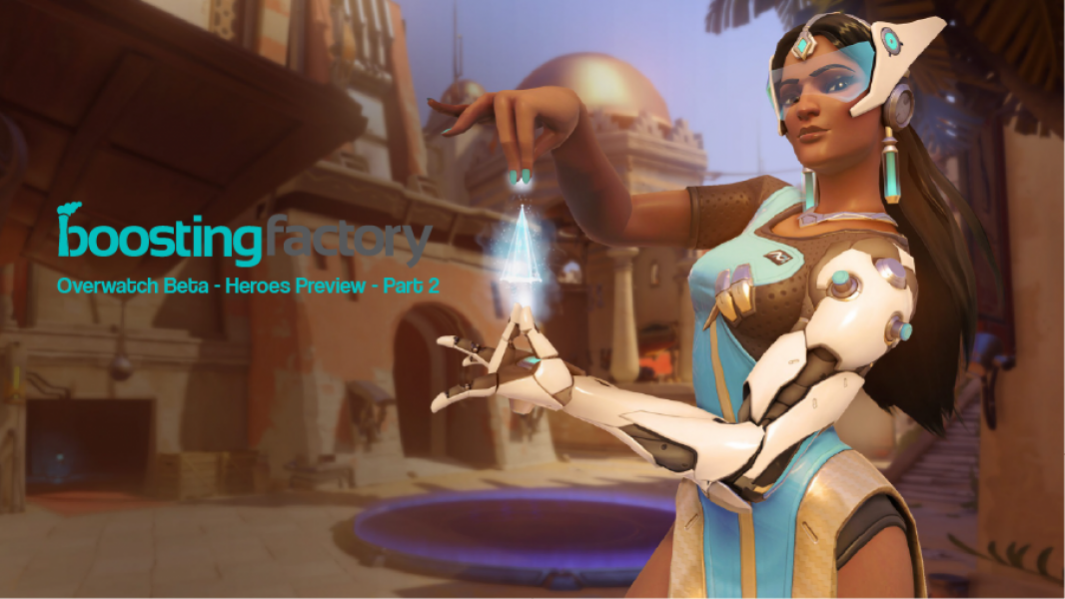 Hey there guys! Today our Overwatch boost team completed the second part of the heroes preview: Blizzard released a few short videos showing us a preview of the Overwatch gameplay and of some heroes. If you missed the part 1 with informations about Tracer, Hanzo, McCree, Lucio, Mercy and Zenyatta, check it out right now, because the Overwatch release date is getting closer and closer: be sure to know everything about the game before its release! To boost your performance, check our upcoming Overwatch tier list to always pick the best hero. Also, don’t miss the last part of our previews: it will be available soon on our site. Without further ado, let’s get started: we have a lot of cool stuff to show you!

Symmetra is another support hero, she is an hyper-technological version of the Engineer class that is pretty popular in FPS games. Her primary focus isn’t to do damage, but to support her team. She isn’t as pretty straight forward to play like your average “kill everything that moves” hero, but she has a more tactical usage. She isn’t even similar to healing supports like Mercy, but has a unique play style. Let’s take a closer look at her kit: like every Engineer, she can place turrets that slow passing enemies. Turrets placement can be pretty tricky for new Symmetra players, as you need to take advantage of choke points and highly trafficked areas to get the most out of her turrets, either for a retreat or to cover for her allies. However, turrets can also be used offensively to help her allies focusing down the enemies. Symmetra damage output is low, so she needs her teammates to help to finish kills. Another cool ability lets Symmetra place down a teleport on the map. Her allies can teleport to this point as soon as they spawn, but they are vulnerable to enemy fire when they exit from the portal, so again take care of its positioning! Don’t make it too easy for the enemies to spot it and especially place it in a safe area that you need to defend. If your exit point is under attack, you will get notified by the game. She can still do some damage, but isn’t really tanky as expected: in the preview video, we see her getting killed many times by Tracer, so she is well suited for a safe playstyle focusing on helping teammates instead of running around killing enemies. She is surely a challenging hero!

Oh boy, Reaper’s preview video is surely the most exciting we have seen so far! In the game played on the Giza Plateau map, the whole team comp was built around Reaper with Tracer, Torbjorn, Zenyatta and Symmetra supporting this scary damage dealer known as the Angel of Death. Reaper was constantly buffed, healed and buffed: all of this teams energy was focused on him. The results? He got on an 11 kills streak, tearing apart his enemies until they were able to finally isolate him from his allies and shut him down. He uses a deadly dual shotgun dealing an absurd amount of damage during the fights, constantly firing and taking advantage of every little opportunity to reload. Reaper is a pretty squishy hero and lacks real defensive mechanics, but he is really a threat with enough support: with the proper composition, I’m sure he will be a major force on the battleground. Our Overwatch boost team will surely remember the havoc in his preview video when considering his placement in the Overwatch tier lists. However, we need to talk about the map too: we finally saw a team playing offensively, moving around the battleground to try and conquer points. There are two locations: Point A and Point B (maybe names are just placeholder). Point A is really hard to defend, and we saw Reaper destroying every enemy on his way around Point A. On the other hand, Point B surely is harder to conquer, and it’s almost impossible to challenge if you don’t already have Point A. In the video we saw the Angel of Death has a lot of trouble there.

Just like Symmetra, Torbjorn looks really similar to the Team Fortress 2 class Engineer because his gameplay is mostly based on his turrets. However, he has a pretty offensive playstyle: for example, he tosses armor packs for his teammates and needs to kill enemies to actually get the materials to build his deadly turrets. His hero preview video was played on the Watchpoint: Gibraltar map, on the defense. Let’s take a closer look at his playstyle! As you may expect from a turret based hero, turrets deal most of the damage here. He is surely a strong hero and in the video, he goes on a great kill streak, but he is never on the front line. Most of the difficulty of playing Torbjorn is in placing turrets. As a matter of facts, I just feel that he is the one supporting the turrets, not vice versa! At least according to our Overwatch boost team, his playstyle is almost boring. He just runs around the map placing turrets and giving armor packs to his allies: it’s hard to see how much damage the turrets are doing. However, judging from his ultimate cooldown, that decreases according to damage and healing done, and to the post-game statistics, turrets DPS is insanely high, considering that he still has some supporting tricks on top of the damage. In the end, we can say that he will be surely a viable hero, but maybe it’s not a good choice if you prefer a front line combat instead of a hide and nuke game.

If you never saw a melee hero in an FPS; there is a first time for everything. Reinhardt his a giant dude wearing a mechanic armor, bringing a weird weapon to the party: a hammer. We already thought that Hanzo’s bow was pretty... antique compared to turrets, laser rifles, and other hyper-technological stuff, but Reinhardt’s hammer is even stranger since it’s not a ranged weapon. But don’t worry: despite being a melee hero, Reinhardt looks really, really strong, thanks to his insane mobility and survivability. And let’s not forget about how badass he looks! His playstyle is totally unique: he is a melee tank with a shield, a charge, and a ranged attack, that focuses on absorbing damage with his shield, charging in the middle of the fight causing havoc and mayhem, and knocking down the enemies. You could think that a giant melee tank gets burst down as soon as he enters a fight, but you can’t be more wrong: he can avoid getting kited thanks to his mobilities and support his team with his abilities, while also absorbing damage. If you really like being THE front line, be sure to pick up this hero.

We were joking about how is strange to see a bowman and a giant guy with a hammer in a gunfight. Well, Blizzard gave us something even more unusual: a freaking monkey! For the sake of clarity, Winston is an ape, not a monkey. And he brings a really cool armor to the party and a few electrical guns with low range. If you happen to spot this monk…, ahem, ape on the battleground, you can’t do anything but miring how awesome he looks and dying shortly after if he is on the enemy team. He is definitely the first hero I’m going to main during Overwatch beta: he is a short-range tank with awesome mobility. As a matter of fact, he can avoid getting into close range until he is ready to use his devastating ultimate, tearing his enemies apart. He has also some nice jump tricks, as expected from an ape! If you like switching from a defensive to a very offensive playstyle many times during the fight, Winston is the perfect choice for you. Fear the monkey! For your safety, our Overwatch boost team reminds you that Blizzard won’t be using Overwatch beta keys because of safety reasons, so the only way to get in the Overwatch beta is to receive an official beta invite from Blizzard. Stay safe, don’t buy keys and don’t get scammed! Remember to check our site tomorrow for the third part of the Overwatch heroes preview!