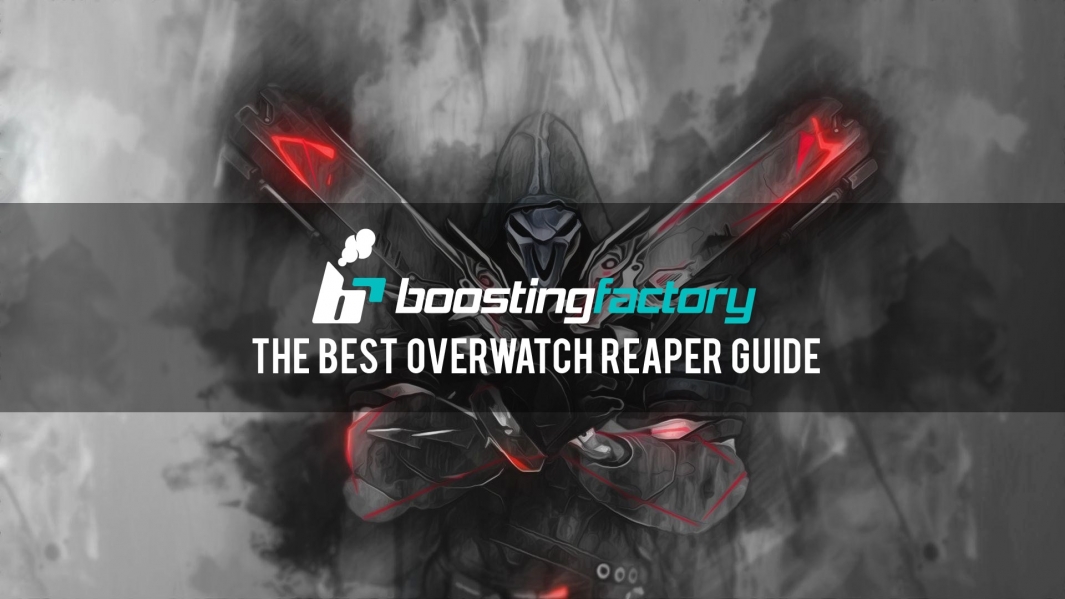 Hey hey hey! Are you good with Reaper? Not as good as you’d like to be? No worries! Today I’m going to teach you how to become a Grandmaster Reaper and melt enemies with ease.

I’m a professional Overwatch player here at Boosting Factory’s Overwatch boost section. I play Reaper often during skill rating boosting orders and I will show you how you can become a sick Reaper too.

Let’s see why Gabriel Reyes aka Reaper is so good.

Reaper is a hero that’s moving from Tier 1 and Tier 2 back and forth on our Overwatch tier list, meaning that he’s often a must pick, and other times a balanced pick. You can’t go wrong with him if you want to increase your Overwatch rank.

Reaper’s immense hard carry potential is due to his ability to pick off on tanks, just as he can on squishier targets. When to go in, who to target, when to use abilities and much more follows below, do yourself a favor and do not skip any sections!

The first thing you need to understand is that Reaper’s fights don’t last very long because you only engage when it’s the right time. While Reaper is fairly easy to play, mastering him by being a precise sharpshooter and hitting those close-range shots with your “shotguns” is mandatory.

Before I explain these 3 situations. I’m going to tell you how to behave in a team fight. Your first objective is to assess the situation, poke and try to punish enemy players trying to push. This means tanks and divers. Your dmg to tanks is insane and you should be abusing it.

While you’re doing that, you need to check are any enemy flankers trying something, such as an enemy Reaper. If they are, your goal is to punish them alone, or shot call to your team that they need to be punished. At that point, if they’re still alive, they will try to retreat and your goal is to chase them down and finish them off.

After the enemy flanker is punished and killed, your goal is to be more aggressive and start pushing into the enemy team because they now lack burst damage to punish you just like you punished them.

You need to keep looking for these opportunities to either zone or punish enemy divers/flankers and find yourself a spot to commit hard versus the enemy team. Reaper needs to be extremely precise and close to the target when it comes to aiming, so learn about hitboxes and practice your aim.

When your cooldowns are on, your best bet is to retreat to a cover either walking or wraithing before you reload and get your cooldowns back. You cannot “soft-engage” with Reaper, it needs to be a full commit and people need to die!

Reaper’s teleport ability allows you to reach high ground and look for an opportunity to either ult or drop-down and simply murder the unaware enemies from behind. Reaper’s ult will be most effective if they don’t expect it. Try to pull this move in your games and you’ll be surprised how good it is.

Many Reapers will use teleport to engage behind the enemy team, similar to what I said in playing the high ground above. However, a better teleport playstyle is the one where you save up your teleport to get behind enemy teams after an engage when they’re actually retreating.

Essentially by doing that you put the enemy team in a sandwich between you and your team, making them panic and scatter, allowing your team a full team wipe. Do this only when you know they’re scared and are for sure retreating because they know they’ll lose, that’s the time to FINISH THEM.

1. Don’t Wraith into the fight, you’ll mostly end up dying and be left without escape mechanics. Wraith is best used to dodge abilities, especially crowd control ones.

2. If you get, for instance, hooked and waiting to exit the stunned mode, hold down the Wraith button, don’t spam it, just hold it, it will be used immediately when the game allows it.

3. Try to save teleport for escaping, the trick is when you’re running away, get out of the line of sight of the enemy, let’s say behind a wall, then teleport far away preferably to high ground.

4. If you teleport in order to engage, try to teleport from high-ground to low ground, or the opposite to achieve maximum sneakiness.

5. After you’ve, for example, dodged a CC ability or death with Wraith, as soon as you’re out, jump in any direction to keep dodging abilities.

6. Solo ulting is not a terrible idea, especially in higher ranks, don’t be afraid to secure a kill if necessary.

7. Before ulting, you need to make sure enemies’ CC abilities are down so you don’t get punished.

8. Spam both crouch and jump when ulting, you want to be unpredictable.

9. If you’re stuck in a poor team fight, spam tanks in order to stay alive.

10. Reaper has no alt-fire, you can bind the key to something spammable such as crouch or melee.

Final words on the Reaper guide

Hey guys, I hope you enjoyed my Reaper guide and that you will become a Grandmaster Reaper in the future!

If you’re stuck as Reaper, try our Overwatch coaching and one of our professionals of your choice will help you master him. If you, however, want to increase your Skill Rating as Reaper, you can purchase a Skill Rating boost, ask us to play Reaper and stream it for you. That way you get the SR and learn how to play Reaper like a pro. :)