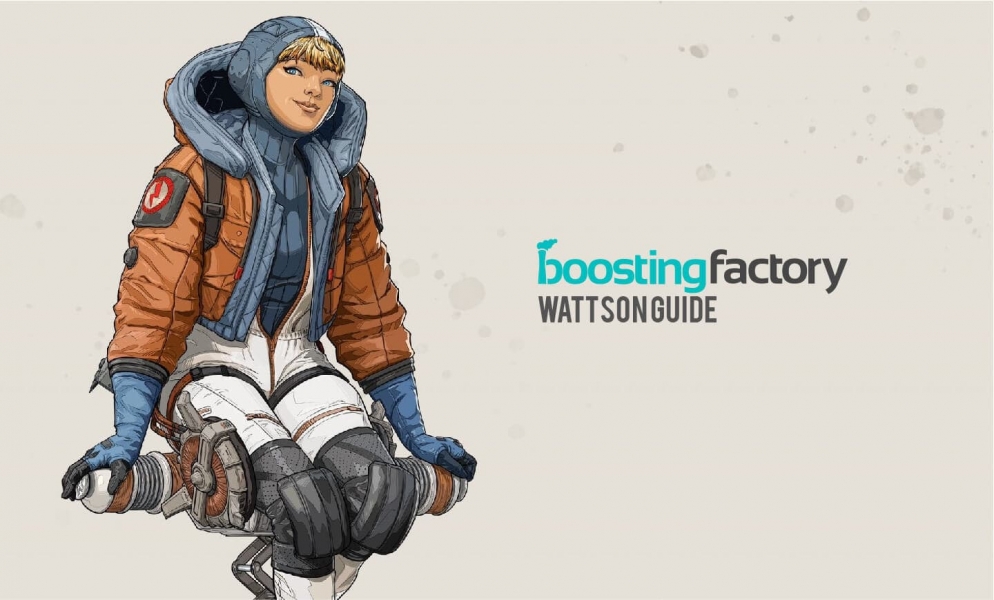 Hello, hello! Today I'm going to talk about Wattson and how can you play her to reach Apex Predator just like me and Boosting Factory's Apex Legends boosting squad.

I'm a high-rank Apex Predator player and Wattson is often one of my picks when my squad wants serious points, sweaty games, and not headless aggressive games. Below, I'll teach you how to utilize Wattson to her fullest potential.

Without further ado, let's dig into Wattson and her kit...

Natalie "Wattson" Paquette is a slow-paced, defensive legend that isn't interested in rushing and going for high kill games. Her goal is to capture favorable positions such as houses in the circle and play around her fence bunker. With the latest changes to the ranked where placement is more favorable than kills, defensive legends like Wattson shine.

With Wattson’s passive ability, ultimate accelerants will fully charge your ultimate ability. While standing near Pylons, your tactical ability will also begin to charge at a faster rate. She also recharges 1 shield health per 2 seconds after avoiding damage for 6 seconds (stacks with Pylon shield recharge increase).

Immediately here, you notice that starting with her passive, her objective is to "stand", not rush around and try to grab risky kills. You will find out more below why. Always carry an accelerant or two in your bags and ask your team to ping it for you, it's crucial to enter the late game with at least 2 accelerants in your bag.

Wattson gives relief to an alternative pick, Lifeline. She will be able to repair shields with his ultimate ability that will likely be constantly charged with ultimate accelerants. As both legends seemingly hog these items and both are considered "support" legends, it's advised never to have both in the same team.

Properly named, Wattson’s Tactical Ability is used to connect nodes that will create an energy fence. This will slow and slightly damage enemies that attempt to pass through.


How to make electric traps with Wattson from r/apexlegends

Wattson’s Ultimate Ability places down an electrified Pylon device. This device will destroy all incoming projectiles (except bullets), bombs, arc stars, Gibraltar's ultimate, Bangalore's ultimate and so on. However, it will not do so if it doesn't have a clear line of sight of the item it needs to destroy. For example Mad Maggie's drill won't be destroyed if its on the other side of the wall and Pylon can't see it.

It will also repair weakened body shields when standing in range. You can have only 1 pylon active.

Below, I will cover a bit what kind of weapons, team compositions, and strategy you should be running, let's start with weapon loadout.

As I said, Wattson is more of a static hero rather than a rush hero like Octane. Therefore, we want a mid to long-range weapon + a close-range weapon for punishing.

Wattson shines with Pathfinder and Wraith in composition. Or Wraith + Gibraltar + Wattson, or Pathfinder + Gibby + Wattson, Or Gibraltar, Caustic, and Wattson. This way you have the mobility that you need and the ability to reach high ground and fortify there.

Pathfinder can easily scout for the next area and can reach high grounds which can be combined with Pylons and Perimeter Security. Your Wraith can set down portals for mobility when it comes to moving from one bunker to another, especially during late game.

Gibraltar offers further protection for your "static" oriented squad with his dome, faster resurrection and an airstrike for more area denial. Some players like to play with Caustic for an even stronger bunker but I wouldn't advise it when you can pick one of the other three suggested.

To recap, Wattson is a legend meant to be played passively. She does not do well with rushing, however, she is very strong in allowing your squadmates to set up in a favorable position. Wattson is very effective as the only legend to be able to repair ally shields. She does this by using her ultimate ability near allies.

Due to Wattson’s passive ability, ultimate accelerants will automatically restore the full ultimate charge. It is important that you take advantage of this and store these for later use. Wattson is great for late-game scenarios and should be paired with Pathfinder because of her ability to get high ground for the team.

If you want to increase your RP with Wattson, or even get one of the awesome badges such as 4000 damage or 20 kills one, check out our Apex Legends boosting services and we'll help you out in a matter of minutes, completely safe and anonymous. Happy hunting!

How to play Wattson in 45 seconds from r/apexlegends