Hey! I’m sure you’re probably as curious as I am to find out who will be the new Legend in Apex Legends! Our whole Apex Legends boost squad is eager to play more legends.

I did some digging for you and I will today present to you the candidates for the next Apex Legend. Note that these legends could appear but are not confirmed, however, they are all in development or being tested.

Let’s dig in with the first one!

Scryer seems to be a recon soldier that’s using Bangalore’s rag doll model for obvious reasons. His passive allows him to immediately spectate his killer once he dies, while his tactical allows him to somehow possess an enemy’s mind and see what they see. Finally, his ultimate allows him to unleash a shadow wall that blocks sight and blinds enemies. 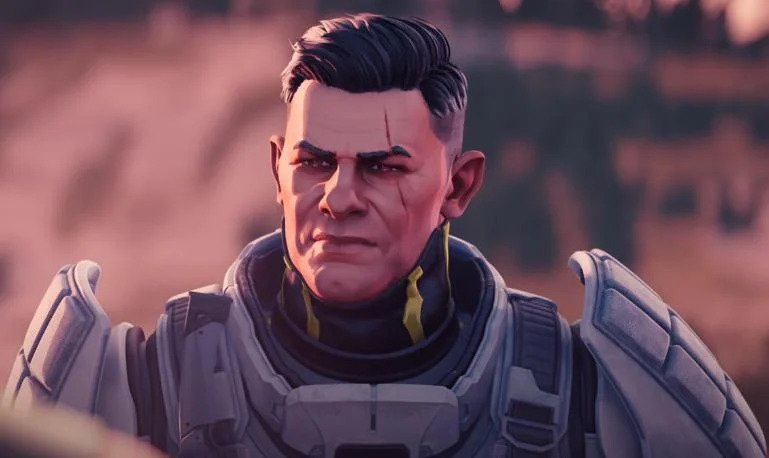 Conduit seems to be a support main legend focusing on shields. Her or his passive regenerates shield over time and gains extra regen for each nearby ally, and when you pick up banners from dead allies you also get the bonus so basically all-around legend that needs to stick to allies.

Jester is clearly a trickster hero whose passive allows him to turn any grenade into a proximity mine that sticks to surfaces. He also spawns with a frag grenade. His tactical allows him to drop a pod with 3 spectres to guard an area. And lastly, his ultimate allows him to cloak and hide all players in a small area for a short duration of time, after they leave the area the cloak lasts for 6 more seconds. 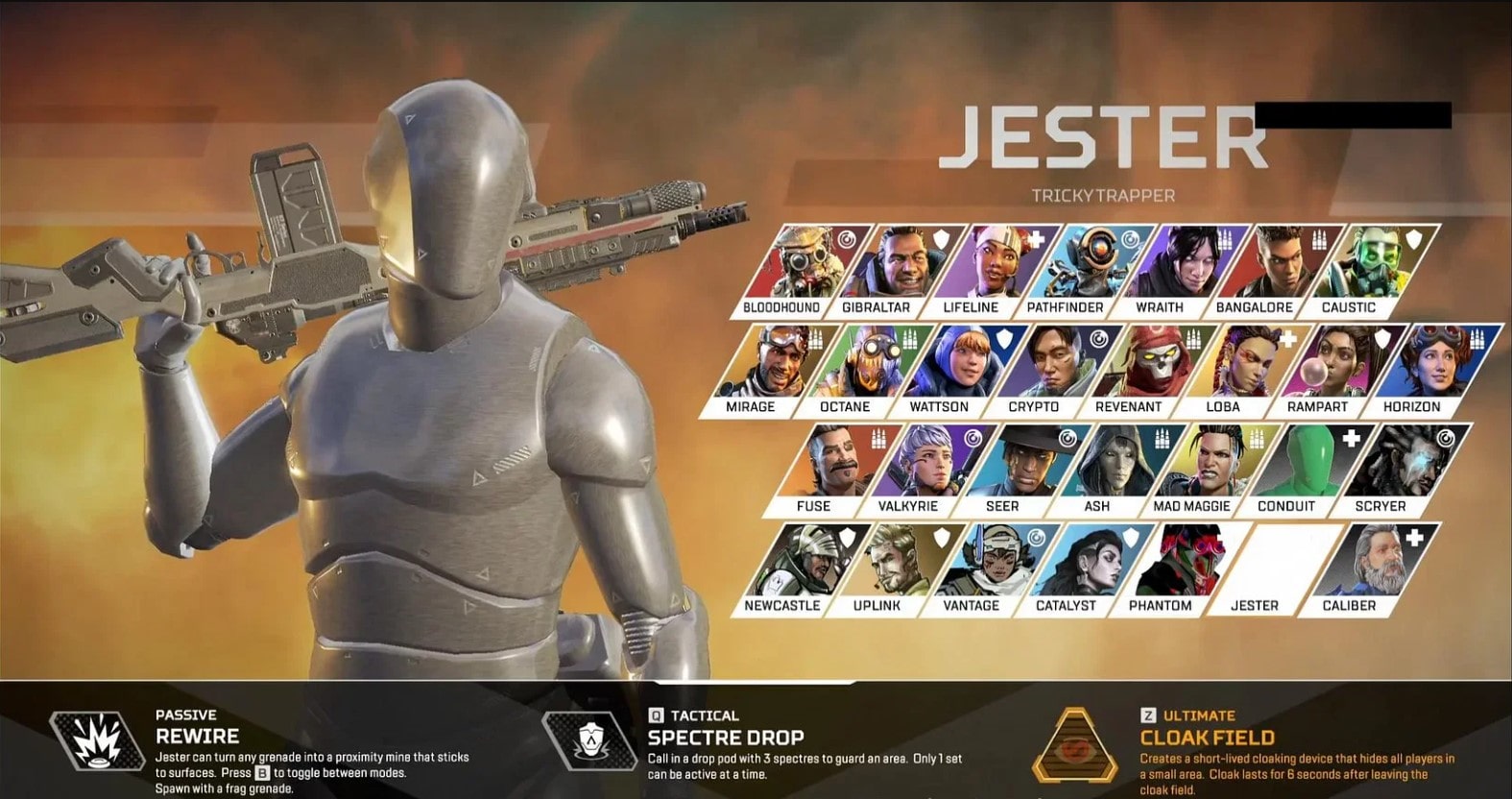 Caliber seems to be a weapons legend similar to Rampart. His passive allows him to carry a third weapon. His tactical deploys a turret that copies his current weapon and fights alongside. While his ultimate allows him to deploy a box that feeds ammo directly into nearby players’ weapons. 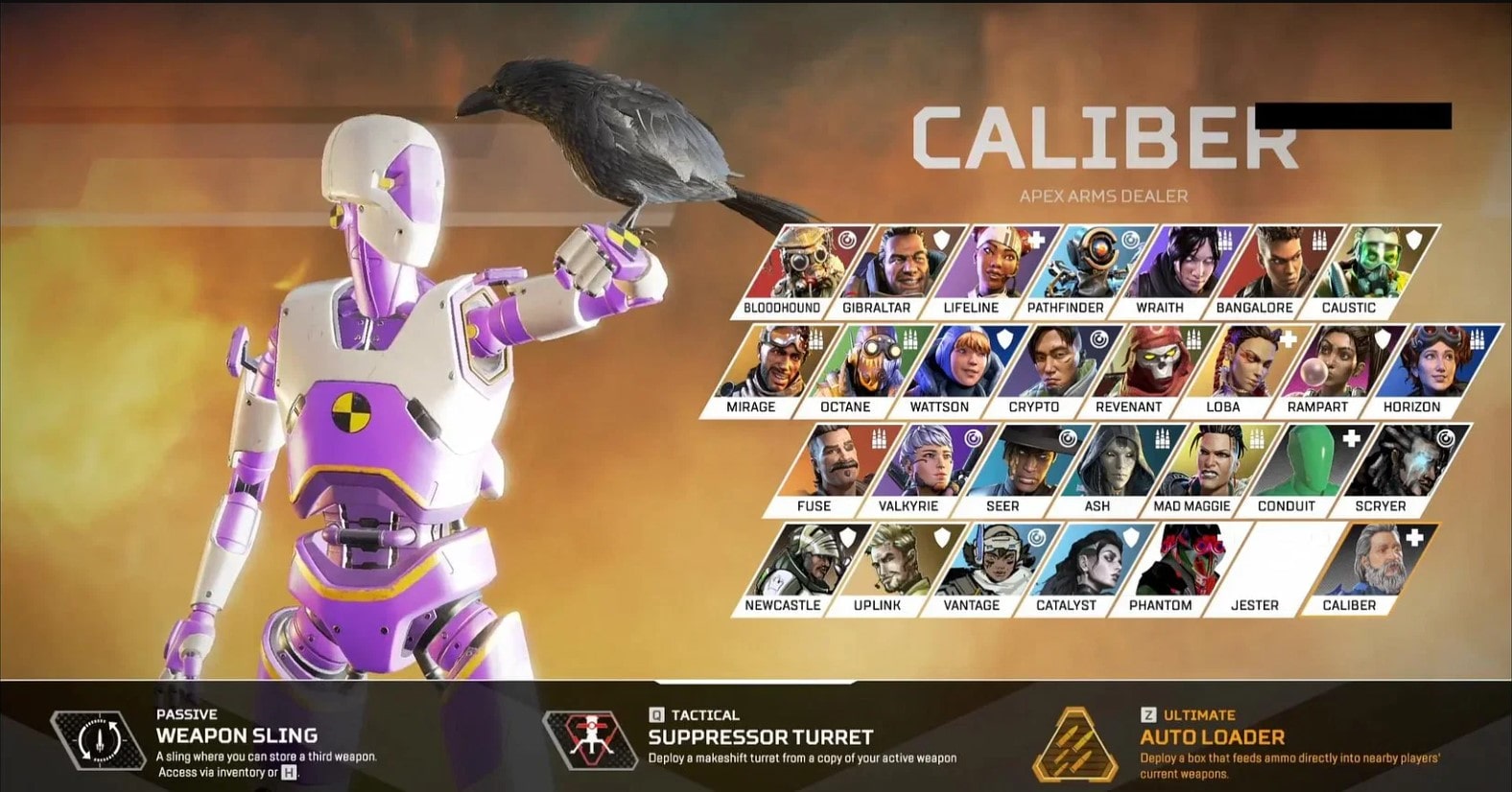 Catalyst seems to be bringing a new mechanic to the game. Her passive makes her ferro fluid structures, doors, and other Legend placeables harden and be able to take more damage. The ferro fluid comes from her tactical, she shoots the fluid and it immediately hardens, it seems to be used to create platforms on walls and harden existing structures such as doors. Her ultimate makes ferro fluid grow from underneath her and create a tower that rises while she’s on it. Looks very Fortniteish. 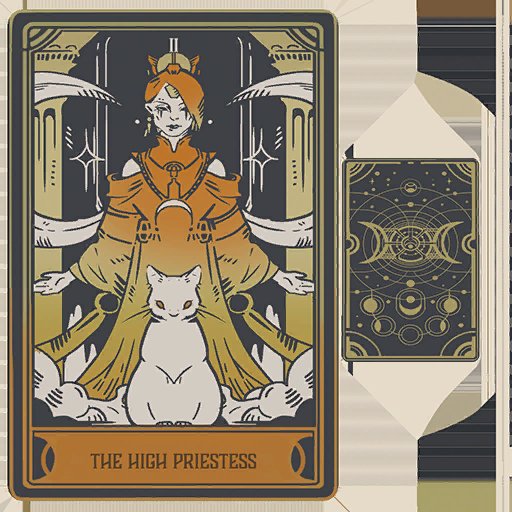 Uplink seems to be a hacker support hero that works with satellites. His passive gains him 25% of Receovery Effects used in signal range. His tactical deploys a sattelite that follows allies to regenerate their shields and revive, while his ultimate deploys a satellite beacon that prevents allies in the signal area from being downed, most likely for a very short duration of time. 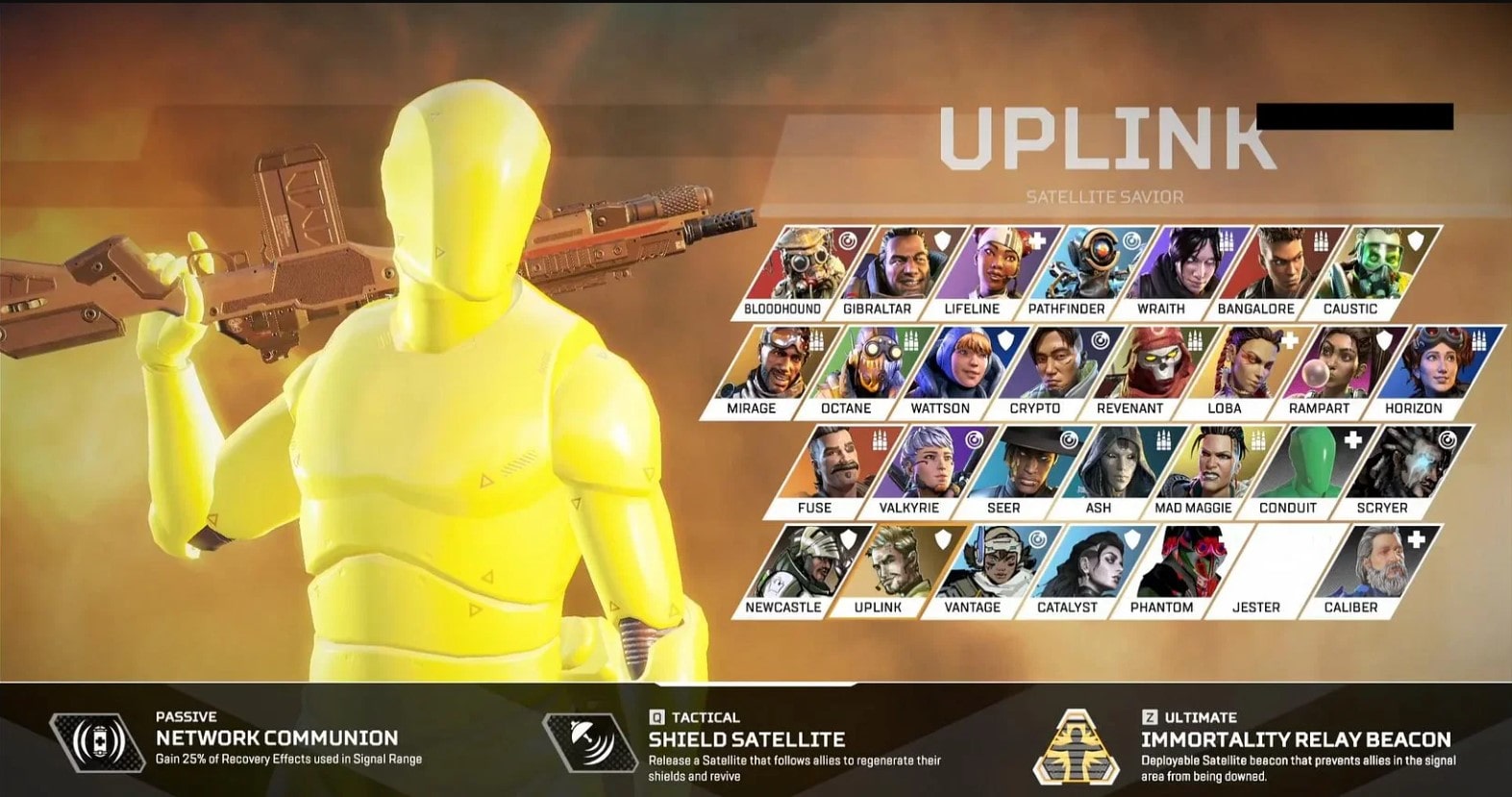 Phantom seems to be an assassin legend that has a little bit of Octane, Pathfinder, and Wraith in him. His passive is a double jump mechanic seen in many other games, his tactical is a hook shot that resembles Pathfinder’s but it hooks to a wall and lets him hang off it for a short time. And his ultimate, Void Grenade is a grenade that sends hit players into the Void for a short duration of time. 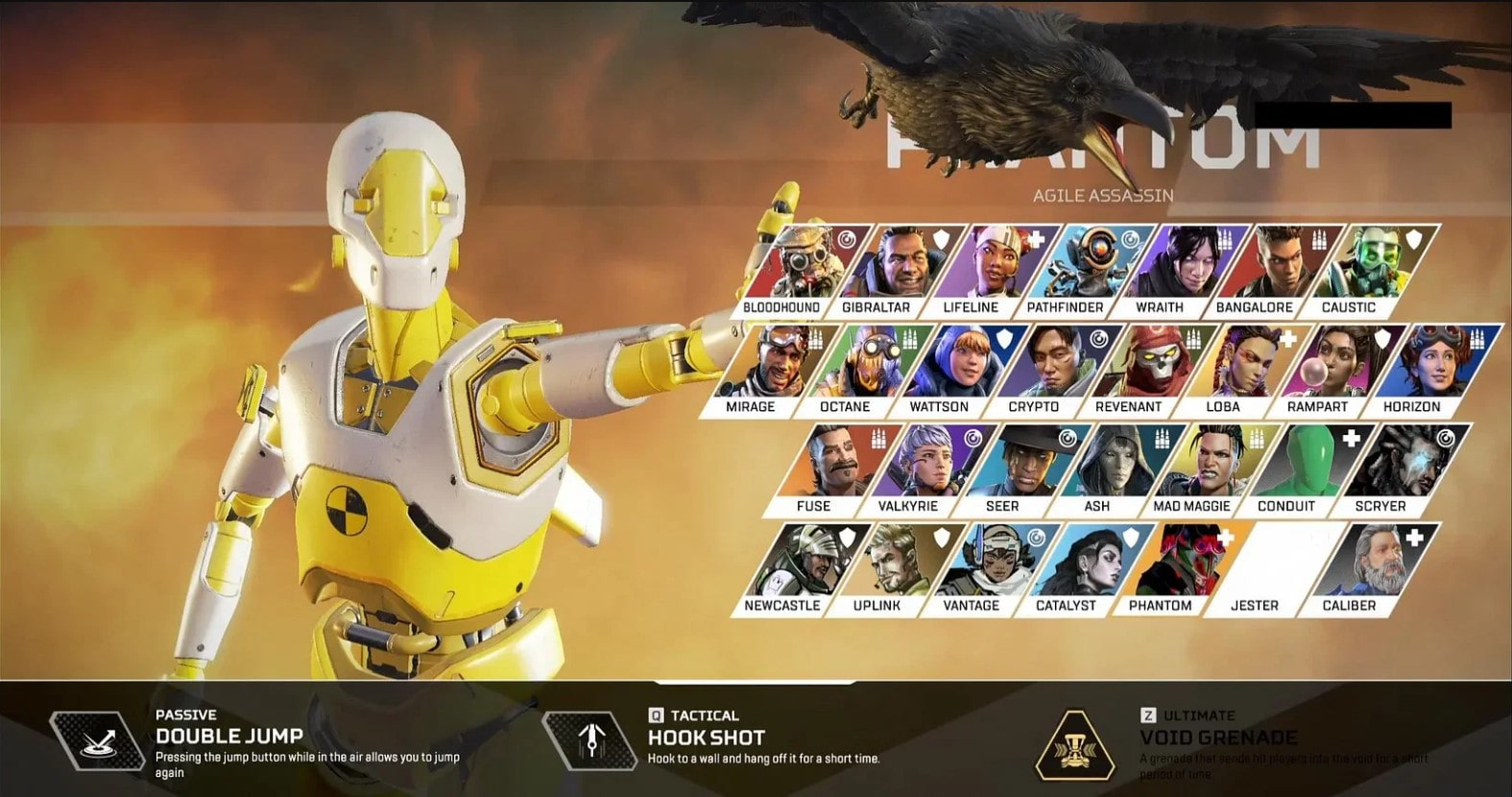 That would be all! I hope you enjoyed these legends and I, just like you, hope they will be amazing at release. I would also like to tell you about our Apex Legends rank boosting service where my colleagues or I, who are all Apex Predator players can help you reach any rank with a little help from us.

The services are risk-free and started the same day! Don’t hesitate to get in touch.