10 Pro Tips Overwatch Grandmasters Use To Rank Up Fast (2020) 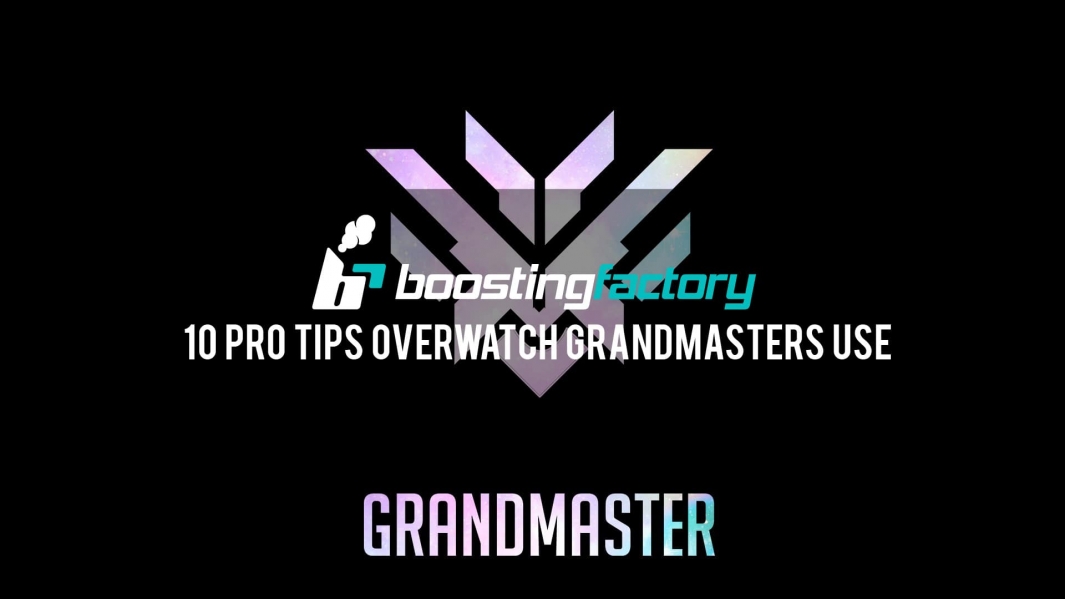 Hey, hey there! Today I’d like to talk to you about the 10 tips Grandmaster and Top 500 Overwatch players use, such as our Overwatch boost team that consists of only Top 300 players just like me.

The guide won’t be that hard to understand and you may already know some of the tips and if you do, good for you!

Let’s dig in with the first tip.

1.Capturing space without picking up a kill

I prefer to divide this tip into 3 stages.

Stage 1 - Pushing randomly as 3 while the others are dead

This is just terrible and this is how the majority of low Skill Rating games look like, people that are alive go and push, the others are in spawn or running, and things are just a mess and you keep losing and losing.

Stage 2 - Group up a full team before a push

This is far better, you see this somewhere in Gold and higher, not too bad but not great. This is not how Grandmaster teams play most of the time and below I’ll explain.

For example, your team has something like Orisa, Roadhog, Mei and Baptiste. The other 2 are not that relevant.

You can try and push the choke point as four and allow the enemy team to give up space for free, while you keep your distance far enough so that if they dedicate and commit to a fight, you can punish them on your own terms, and the rest can join in ASAP. You will keep pushing as long as they allow you, when they decide it’s enough, you have abilities to kite them back until you guys regroup. In the best scenario, you will have captured enough space, your team will regroup and you can continue as 6.

If you had waited for your team to first group up as 6, you have allowed them enough time to set up around the choke point and bunker up while you guys are grouping up. Of course, you need the experience to realize when you can do this, and when you can’t. This will come with practice.

Another tip that Top 500 and GM players often do, especially on 2CP. The first thing you need to identify is it your duty to is it to stall the point or is the fight winnable and you should go in.

For instance, one of your teammates goes deep in and it’s a fight, you could switch to Doomfist or Widow, because Doomfist can easily get a kill, so can Widow and this could turn the team fight to your advantage.

This way, you cut out the enemies’ sustain by then having someone else stall the point while you abuse the spawn advantage.

When capturing a point, such as payload, King of the Hill or any kind of objective or chokepoint you always want to chase down the enemies trying to escape from a fight, that you just won.

When you win a fight or a point, you don’t want to stay as 6 and “secure it” by leaving enemies run away and regroup with their team, you will get your ult charges and increase their respawn and grouping-up time.

You can easily snowball further fights like this because you will have your ults faster. For instance, in King’s Row, you only want 1 person securing the point while the rest pushes and chases down survivors.

4. Understand when the fight is won

In my Overwatch boosting career, I’ve seen many times that low Skill Rating players win a fight by for example being 4 v 2, then the two somehow get a random kill and the other 3 start popping ults and wasting everything to win that already won fight.

If you see that happening, don’t use it, let the randoms use their stuff but you save yours if you understand that the fight is already won.

I know that Overwatch is complex and there’s a lot of ultimates, I don’t expect you to track each one like a robot, of course. What you should do is try to track the biggest ones, such as Zarya’s Grav Flux, Lucio’s beat, Genji’s Dragonblade or Zen’s transcendence.

For instance if you’re aware that they have a Dragonblade ready, you won’t be using your beat as Lucio recklessly, knowing that they have Grav you won’t go in like a headless chicken knowing you can get Graviton’d.

At some point, if you learn how to track all ultimates, you will be just like one of our Skill Rating boost pros and that’s amazing, but for starters, start tracking the most impactful ones.

For instance, Orisa’s pull is currently one of the best things to combo with. It can easily be comboed with Graviton, Dragonstrike or Blizzard. Most people only focus on comboing ultimates, however, learning how to combo abilities can be just as strong, and it happens even more often.

Be creative, don’t just wait for ults to do combos!

7. Switch your playstyle, not heroes

I’ve seen numerous times where people play their comfort hero, which is also highly rated on an Overwatch best heroes list. Or for instance, you pick one hero and you’re hard countered, yeah the most logical thing would be to swap, but can you play that hero as well as you can play your best one that was countered?

High rated players and Overwatch boosters know that they can change their playstyle a little and achieve the same or even higher value. It’s not really worth to pick a perfect hero if you can’t do as much value as you can on your comfort one. Pretty simple.

8. Know when to fight, and when not to

When you’re on a flanking route and you run into an enemy hero and you’re not 100% convinced you will win it, and your team is actually in a fight for the point, you must realize that this is not a 1v1 you want to take and risk dying and your team losing the point.

However, if you know that your team cannot win that point fight even with you there, for instance, they have all ultimates, generally are stronger and so on. It may be the time to pull that cheeky 1v1 and bring insane value to your team.

This is how a Grandmaster player differs from a low skill rating player. Low SR players will usually engage in a 1v1 recklessly because they want to be the tough guy and the ego is too big. Grandmaster will usually do that only when he’s certain it’s the right choice.

For instance, if an enemy is a low threat, such as D.Va outside of the mech, or Mercy, it’s sometimes better to just deny them with a Sleep Dart or Mei wall so they can’t kill themselves to respawn and regroup with their team.

This is not a major tip, but you can deny some value out of that hero and kill them at the last possible moment before they become a threat, by either regrouping or suiciding. This tip is not valid for heroes that have insta kill potentials and are a high threat, you don’t want to risk them running away or getting a pick on someone from your team.

This is a direct counter to tip number 7 and that’s okay! There are players who are close to getting their ult or already have it, so they don’t want to swap because they want value out of that ultimate. However, they’re not bringing value because they’re hard countered by the enemy team.

And the next thing you know there’s been 2-3 minutes and they still haven’t got the perfect ultimate but their value is low, essentially wasting time.

If the answer is: I will bring a lot of value if I get that ultimate off, then feel free to not swap. But be realistic, if it’s not that much value, swap, build the ult on another hero and bring actual value to your team.

This page was generated in: 0.76 seconds.