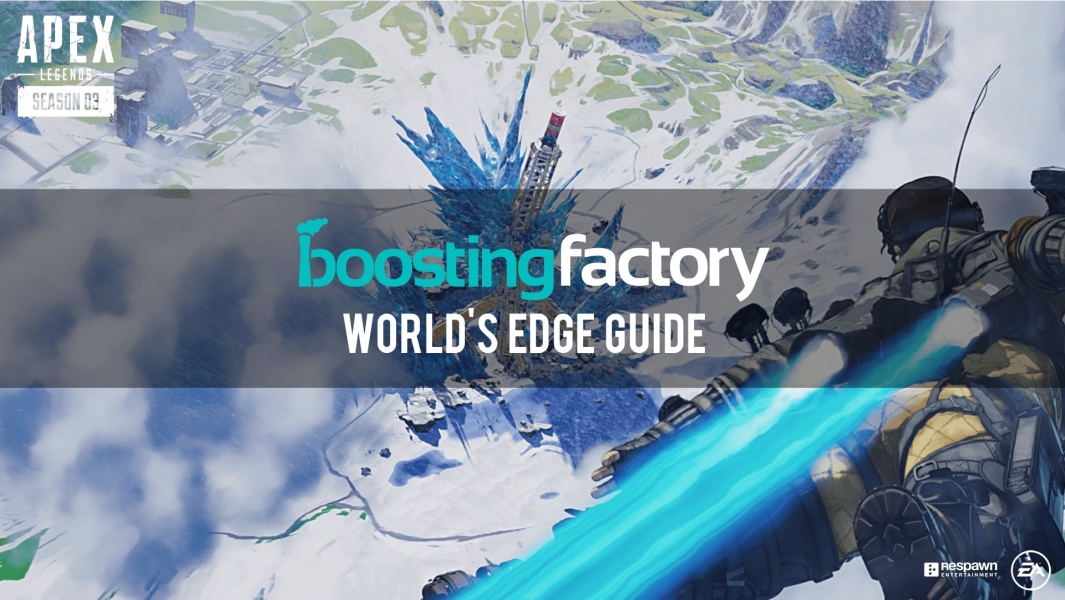 Apex Legends' Season 3 has brought us a brand new map called World's Edge. In this guide, I will tell you what's new with the map, the best landing spots for the best loot to risk ratio and a couple of tips & tricks.

My name is Blink and I'm a professional Apex Predator player here at Boosting Factory. In order to do my job in Apex Legends boosting team at the highest level, therefore, I will share some of that knowledge with you guys.

I'll try to keep it short and clear not to use too much of your time, so let's dig in.

Note that these are my personal opinions and some players might disagree. I also suggest you rotate 3 of these or another 3 of your favorite spots in order to learn the area well and do better when fighting there at the start of the game.

It's worth noting that if the dropship is coming from the direction of these sites, they may not be a good choice because impatient players will crowd it.

Located in the north-west edge of the map, you are well protected from all but two sides - the one from Epicenter, and the one from Countdown. Surrounded by many mountains, this is one of my best spots with plenty of loot for your whole squad.

However, you may face multiple squads here so be prepared to fight, this isn't a lone area of the map, but the risk-reward is, in my opinion, the best. The zone features 26 supply bins. There are a jump tower and a zipline to get the hell away if necessary.

The dome is located in the south-east area of the map. Once again you're protected from many sides and you can expect enemy squads from Lava City, as the players from Sorting Factory rarely go for the Dome after they clear out Sorting Factory.

There's plenty of loot (22 loot boxes) for your squad and the population is medium as it's a very edgy area (pun intended). There's a jump tower to the north when you need to redeploy or escape.

If you notice more than 1 faster squad going for it, especially if you're slower to them, try redirecting to the Tree if you see it's empty. 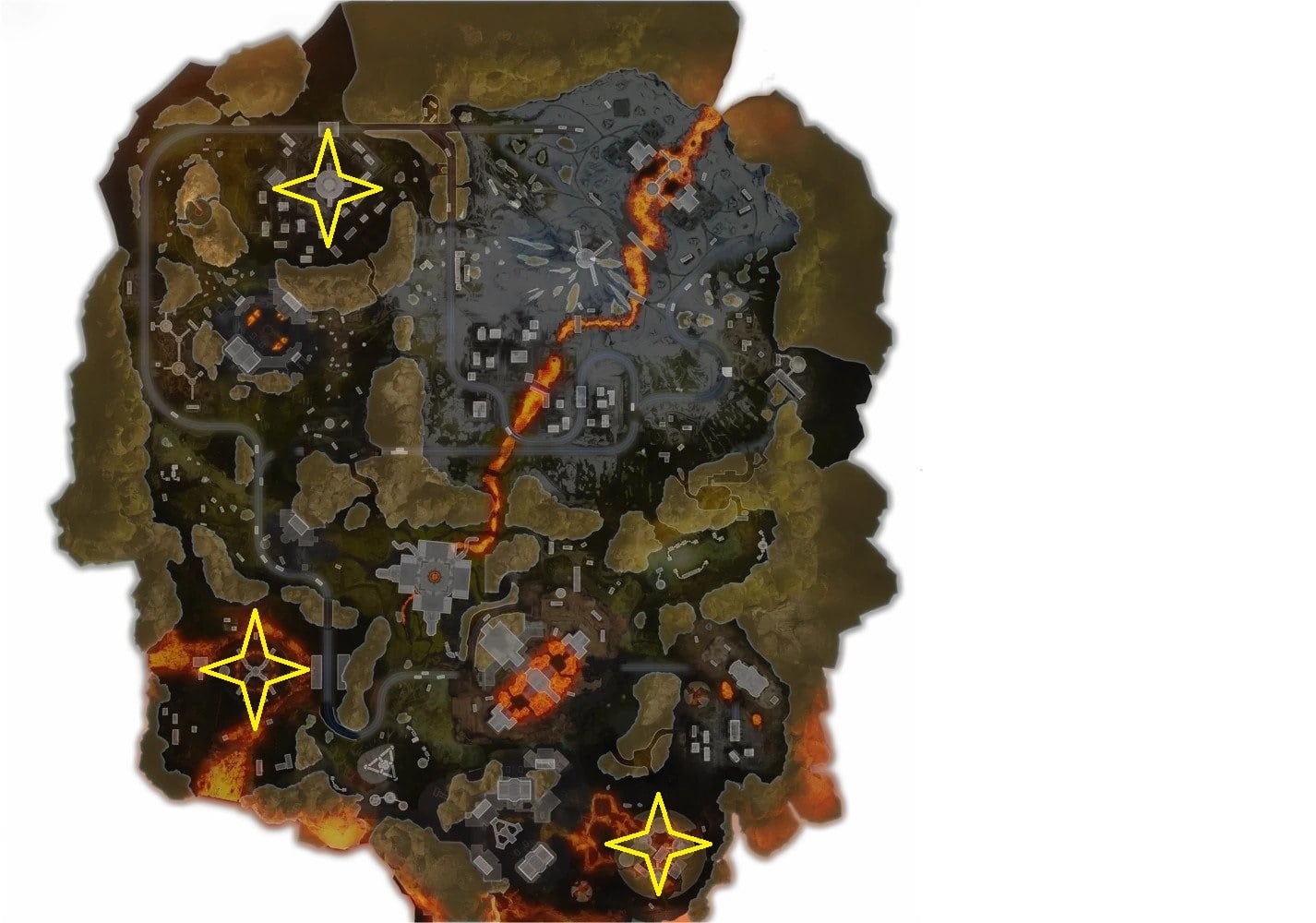 Not many people go to this zone and it offers medium loot (15 loot boxes). Your only worry is players from the Dome. However, you will probably loot it faster than they loot The Dome and escape on time if needed.

After you're done you go can for The Geyser which is also often a safe zone but you will probably get in a brawl there.

Rampart's Big Maude was added during Evolution event and it's near Lava City. There are so called Vend-It machines that allows you to buy special Rampart-modded fully kitted weapons with Splatter Rounds hop-up (bigger magazines and faster reloads).

Bloodhound's Trials was added to the map during The Old Ways event. It's located in the north-west of the map with a few bins on top of the hill. However, the real thing is inside the hill where you can complete a mini PvE challenge by killing Prowlers and unlocking better loot with each round. You need to be careful with 3rd parties though.

This zone replaced Refinery in Season 10. It's located in the northeast side of the map.

This zone replaced the drill site. It's southwest of Skyhook. Features multiple pits of lava and 21 loot boxes.

Quite a small zone barely suitable for one team (10 loot boxes). Features a cool addition which is a weapon-rack in the houses which means the weapons are in a rack on a wall and not the floor. A very safe zone but never go there if anyone is coming with you unless you're much faster to pick up loot and wipe them out for free kills.

This was the old Capitol City which I loved to call Skulltown, crowded zone with great loot and a lot of boxes but there are brawls guaranteed for each landing. It contains a total of 31 loot boxes.

It's located where Train Yard used to be, doesn't feature high tier loot and shouldn't be landed on.

South part of the map, west of the Dome and south of Sorting Factory. High tier loot.

A very large zone with high tier loot and almost guaranteed multiple squads in it. It was added in Season 4 and features multiple levels with a total of 24 loot bins.

This zone is a hit or miss, it's fairly close to Capitol City which in my opinion is one of the worst zones to land with lots of RNG and 3rd party potential. The zone features only 15 loot boxes. The Epicenter is fairly popular while being a small zone, therefore, land there only if you don't see any other squads coming in.

A medium-sized zone, pretty decent for one squad, or at least if you're the faster squad out of two squads coming in. It features 19 loot boxes. Not so popular, however, you might be needing to go to Capitol City and that, in my opinion, is not a good thing.

It features 29 loot boxes which are a great amount but there's a lot of traveling through it. Not so popular so it's a decent landing zone. You will be mostly heading to Sorting Factory after.

Medium-sized zone with decent loot even though there are 26 loot boxes if you include the tunnels. It's a fairly central place with Capitol City train track on the right, Lava Fissure on the left and Countdown on the northwest. Many squads are going here nearly guaranteed.

A small zone with only 12 loot boxes, one of the lowest on the whole map. Also, a very central zone surrounded by basically everything. I would go to this zone as the last resort only and if you're the only squad. Featuring 12 loot boxes.

This zone is only good if you're an aggressive team that likes to push one of the other zones, grab kills and take their loot. By no standard, this is a zone for a chill game.

Medium-sized zone with the nice geyser in the middle that propels you in the air and gives you a jetpack to land wherever you want again. Not so popular zone and fairly safe, in my opinion, it's a good landing spot even if there's another squad coming in. It features 17 loot boxes.

A huge zone on the southwest part of the map. Fairly well protected and has tons of loot including 48 loot boxes. It will take you a while to clear it up but you will 99% of time face more squads there. At least try not to land in the very center of it.

Another large zone popular among squads that feature tons of loot, exactly 44 loot boxes. However, it's a fairly central area surrounded by many other zones on top of you probably facing many squads in there already. Similar to Capitol City, I'd avoid unless you want a Skull Townish experience.

And the last one, The Tree. Very small zone with only 11 loot boxes. Good for a chill match with not many squads landing here. But I'd land here only if I attempt to 3rd party the Sorting Factory or Thermal Stations. Don't expect a chill game, only looting here will be chill, action follows shortly after.

I hope you all enjoy this beautiful map that breathes in fresh air into Apex Legends. I hope you learned a lot from my guide!

In case you're struggling with reaching your desired ranked tier or the badges like 4K damage and 20 kills, we can do it for you safe, fast and anonymous. Just check our Apex Legends boost page and customize your order and we'll start it momentarily.