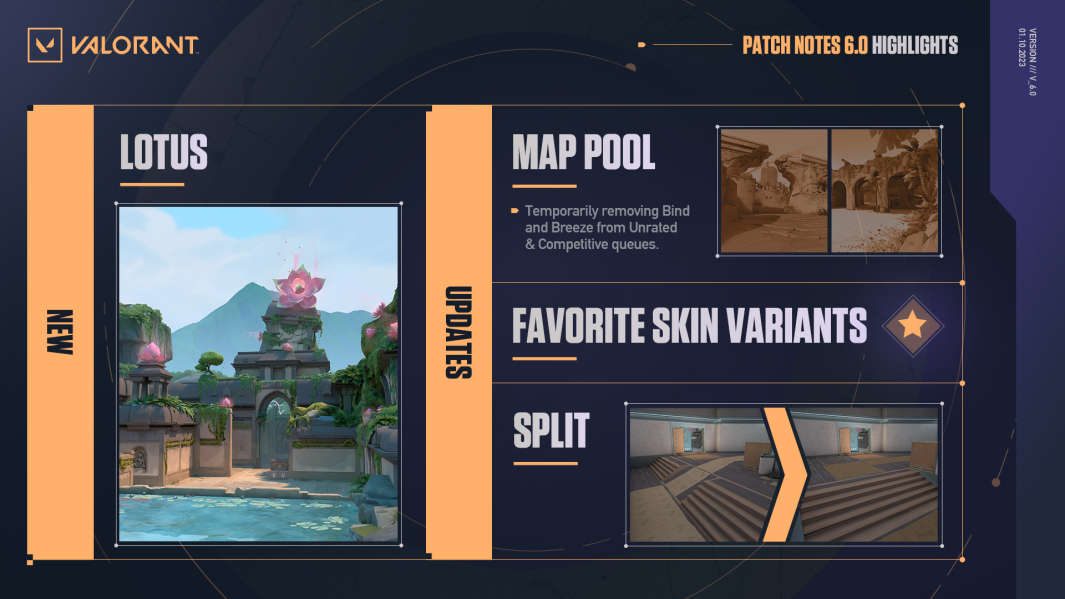 In addition to the release of Lotus, a brand new map that you should absolutely play, this patch also introduces the Araxys skinline, a brand new Battlepass, and a refresh of the rankings.

Check out the news below about the reintroduction of Split, the modification of RR increases and decreases, and the implementation of a much-requested feature: the option to favorite variants.

Improvements to the handling of Toggle Zoom inputs for ADS and Scopes.

This is kind of technical though. There should be fewer occasions where the Client and Server may disagree on Zoom when experiencing degraded network conditions like packet loss and ping jitter. Not only can we now buffer multiple zoom level transitions at once, but we can also buffer Zoom inputs earlier than before when utilizing Toggle Zoom.

The new 3-site Lotus map has multiple rotation modes to choose from. Explore the crypts and find out what happened here in the past.

As of Patch 6.1, the Lotus only queue will no longer be available in Swiftplay mode, and instead will join the competitive and Unrated map rotations.

Split is returning with a few tweaks to make attacking a little easier.

Breeze and Bind are no longer available in competitive and Unrated modes but can still be played in any other mode.

Previously, Dark Cover inside of walls would drop to half their height, but this change has made them drop to the level of the neighboring ground.

While one-way smokes are a feature of VALORANT, we want to ensure that they are only used in well-defined locations that are easy to defend against. We will be watching to see how this develops the power of Omen.

The following adjustments should make it so that your Ranked Rating gains and losses feel more regular, and the impact of stomps on your RR will be less noticeable. We'll be keeping a careful eye on the numbers so that we can make any required changes.

When a new episode drops, the rankings will start over. Assume a lower placement rank than you had at the end of Episode 5 and best of luck getting higher!

Keep in mind that with every new episode comes a fresh start at the top of the rankings. Seasonal resets give participants a fresh start to show off their skills and remove inactive members from the ladder.

This goes out to everyone involved: The specific round differential of a match will have a smaller impact on a player's rise or fall in the ranked ratings, favoring instead a focus on the match's outcome.

It's still all about the wins if you want to get ahead in life.

For players whose rank is far away from MMR

Gains in RR for players whose ranks are significantly different from their MMR will be more attributable to individual performance than round differential. Your rank and MMR should also be converging more quickly.

While climbing the ranks, players complained that they would not be rewarded for good play and punished too severely for poor performance.

If a player's rank is lower than their true MMR, they will receive greater rewards for victories. A player's performance in a match where their rank is higher than their MMR will not be severely punished if they lose.

We will be boosting in this Episode too. Head over to our Valorant rank boosting service page and customize your boost. However, if you haven’t done your placements yet, you can buy them on our Valorant placement boosting page.

Our professional players will play for you, or with you to your desired goal, whether that’s a division or only placement matches.