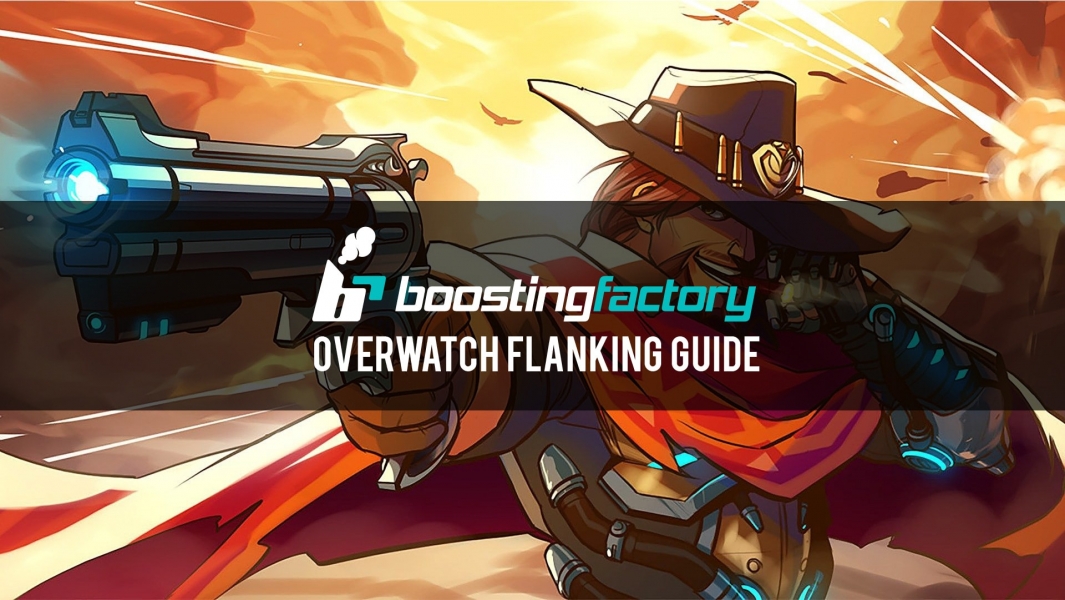 Flanking is one of the strategies players use to achieve pickoffs and turn games. It’s quite important to learn how to flank and how to defend when someone is flanking you.

Since I’m a professional player at the Factory’s Overwatch boost squad, flanking is something I regularly do when boosting someone’s Skill Rating and rank.

Today I’m going to share some tricks on how to flank and how to deal with flankers. Let’s go!

What Makes Flanking So Good?

You will often hear, especially in lower skill ratings that players are complaining about how their teammates keep trying to flank and basically just feed. While you will also hear that the enemy flankers are gods and keep wreaking havoc at their backlines and making them lose Skill Rating.

For now, we will ignore the chit chat and focus on why is flanking a great tool.

The first reason is definitely the element of surprise, especially when the flanker is a fast kill-time hero like Widow, Hanzo, McCree, and Roadhog. This means, that before the enemy can even react, they’re half HP down or dead.

If you’ve managed to burst someone important down, you can even try to pick up more kills or escape through the flanking route back to your team. It’s truly a sucker punch and it feels good.

Why Not Flank All The Time?

It’s very simple. It’s a high-risk, high-reward move. The biggest risk is clearly that you get caught off guard and just die. Therefore, you need to know WHEN to actually attempt a flank.

This is definitely the most important aspect of flanking. The first thing you need to learn is that you can’t just run away and try a flank at any time. Many times, your team needs you to be grouped up in order to prevent a chokepoint push, objective or simply an enemy diver is trying to wreck your backline.

Even if that flank goes well and you get a kill, your team might be wiped out by the time you’re back.

Mechanical Consistency Is The Key

As an example, let’s say you’re trying to flank as an Ana and you want to get a great ‘nade. If you’re mechanically poor, and you don’t hit it properly, the flank is ruined. The better you are mechanically, the more consistent your flanks will be.

You really have only a small window of opportunity to execute it right and it needs to be executed perfectly. Therefore, if you play your comfort picks and mains, you have better odds of getting good value out of flanks more consistently. Not every flank will go great, but the better you are, the better the percentage of good flanks.

Flanking as Cree, you want to be a precise shooter and you want that first shot to be in the head as intended or your flanks and Skill rating are not going anywhere.

When Do I Flank?

The first point is definitely when your team does not need you in the frontline. I talked about that just recently.

The second point is when the enemy can’t protect their backline, meaning that when the rest of your team are currently doing a push and putting pressure on the enemy frontline that they’re so busy to focus on their backline.

Their awareness is fully focused on protecting the frontline from the push and it’s extremely easy to flank because the backline isn’t thinking about a flank on top of this frontline push.

The third point is to turn a losing fight. Overwatch boosting professionals will often do this point because they’re mechanically great and if the team isn’t doing as well as they’d hoped to, they will attempt this kind of flank to turn the game around.

This is the cheekiest and most riskier move because your team is already getting pushed and is also vulnerable to enemy flanks. However, if you have an ultimate that is high impact like Widow’s or McCree’s, you may try to flank when the enemy is confident and focused on breaking your team. It needs to be clear-cut and efficient because the fight will be lost even sooner if you fail.

To make it as short as possible, a soft flank would be a flank where you have an option to retreat to your team or escape the enemy team.

An example of a soft flank would be moving away from your team and peeking out of a corner or wall at a different angle than your team and trying to kill enemy backline or people behind shields. If it doesn’t work out, you can easily retreat.

A McCree is an amazing soft flanker because if he does this, and goes back behind the corner, chasing him is generally a bad idea because of the stun and one shot to the chaser. Not only McCree is good at this, but Hanzo with his Sonic Arrow is also great as well because you have an informational advantage.

A hard flank is, naturally, a more all-in approach in contrast to the soft flank. It heavily relies on you being mechanically consistent just as I talked above and picking up 1 or more kills.

An example is fully exposing yourself from a different angle than the other team, often tanking a flanking route. Being fully exposed and risk dying, but, if you’re mechanically correct, you will pull off the first kill with ease, and hopefully, at least one more if you have an ultimate ready. Picking up 2 kills will surely turn the fight and you have succeeded.

Essentially it’s a kill or be killed situation. No other way out.

This is what people talk about when complaining about their teammates flanking and feeding on the start of this guide. This way of flanking is only for highly skilled mechanically confident players. Do not do it unless you’re super confident in your abilities.

Turning a Soft Flank into a Hard Flank

Most hard flanks usually start as a soft flank. For example, you did a soft flank and picked up a kill. Great, now you can estimate the situation and see if you can turn that into a hard flank since this hard flank will now be easier with 1 person dead.

If the enemy team is still not focused on you, or is generally weak, instead of moving back to your team, you can turn it into a hard flank and pick up more kills. You will need to practice this a lot in order to boost your Skill Rating in Overwatch efficiently.

You Don’t Have To Do It All The Time

I’m sure that after reading this guide, you’re probably pumped and wanting to flank every possible situation. But let’s take a hard stop here.

If you flank consistently and predictably, the enemy team will realize your habit and will punish you for it. You need to have the element of surprise.

You need to realize that flanking is not a joke, especially hard flanking, it’s not something you do nonstop, it’s used periodically to turn the game around. Not all the time, you will fail more than you succeed if you keep pushing unnecessary flanks.

Final Words on Flanking in Overwatch

Start with the soft flanks, keep in mind where your team is, who can come and save you, where your exits are. If you don’t die after a failed soft flank, it’s usually no big deal.

With time and experience you will learn how to estimate should you or should you not flank.

This page was generated in: 0.26 seconds.