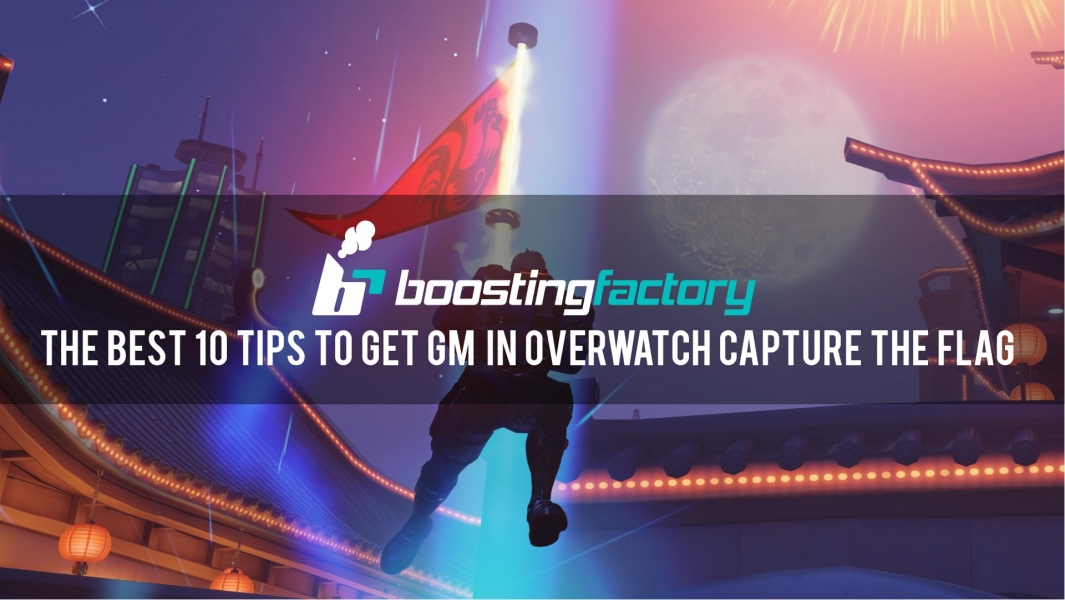 What’s up, everyone! Today I’m going to talk to you about the Overwatch’s Capture The Flag and the top 10 tips that will help you reach Grandmaster in CTF.

Capture The Flag is a competitive mode that happens once every year and lasts for a couple of weeks, it has the Top 500 ladder and everything, so in case you’re not familiar with it, check out our everything about Capture the Flag mode post.

I was Top 500 every CTF season so far which makes me the best CTF player in Overwatch boosting squad here at the Boosting Factory. Let’s start with the tip number 1 that will help you boost your Skill Rating in no time!

It’s very simple. You need to have 5 people in the attack and 1 person in defense. If you would play a 3 attack 3 defense comp like people used to before, you’d just get overrun by a 5 or 6 person push and make you lose every single flag.

If they decide to run a split comp, great, you’ll do to them what I explained above and a guaranteed win will follow.

2. Decide who will be the flag carrier

At the start of the game, make sure to talk and decide who will be the flag carrier so there’s no confusion later. If you don’t, you’ll have people randomly picking up the flag and making the game a complete mess.

A good idea is to put a tank up such as D.Va or Roadhog for the flag-carrying duty. Ideally, a hero who has absorbing and defensive abilities.

I don’t mean just when they got the flag, check who is their dedicated flag carrier and try to kill him before he even reaches the flag. If they’re using tanks to carry just like you are, you can safely assume one of them is the carrier so try and kill him before he gets the flag even.

If you do that, they not only lose the carrier, they lose a tank which is obviously a pretty significant blow.

4. Tanks as a decoy - someone else carries

Have your tanks go full frontline into the enemy team so that they act as a distraction while someone else on your team picks up the flag.

This can be a really neat trick where you don’t even try to win the fight but just grab the flag and get the hell out of there while tanks survive for as long as possible, or retreat with the carrier if possible.

5. If your runner dies - another tank picks up

Pretty self-explanatory, but if your runner dies, whether it’s a tank or someone else, have a tank pick up the flag, nobody else. They can eat a lot of damage and they’re your best shot.

Even if they die, the flag is certainly closer to your base. Don’t forget that in order to recapture the flag when a carrier dies, you just need to touch it and you’re good to go.

6. Save your offensive ults to pick up

I know this may sound counter-intuitive but try to use your defensive ults for when capturing the flag from the enemy base.

For instance, a D.Va bomb or Mei’s Blizzard will deny the area of the flag allowing your carrier a window of opportunity to capture the flag and start running back. Use your offensive ults when protecting your flag in the base, because that’s when you need to wipe them out and not just deny.

You need a McCree, Mei or Ana or something similar to that in your team comp. If you wonder why it’s pretty simple. You want those stuns and incapacitations for when you see the enemy carrier rushing to pick up your flag.

8. Split the enemy team from the carrier

As soon as the enemy team picks up the flag, they will try to form a “human shield” around them and give their lives for him. This will make it hard for you to actually kill him and that’s why you need to do your best to split him from his team.

If you see someone going for a flank, do your best to keep them split for as long as possible, even if it means just having one person split away, it’s good. If you somehow split them with your zoning abilities, rush in immediately and try to keep them split.

When you carry the flag, play like a rolling ball, you all move together and don’t get split. Make sure to communicate this via voice chat, no splitting, no monkey business. The damage will be soaked by all 6 players effectively protecting the carrier.

10. Both flags on the run - deliver yours first

If both flags have been picked up, your goal is to actually deliver yours first or at least deliver it for 1 point for both teams.

The only time you want to kill the enemy carrier while you’re carrying is if the enemy team is 2 points and you’re 1 or fewer points. That’s when you can’t have them deliver the flag.

If you’re struggling with reaching your desired Skill Rating in Capture The Flag mode no matter what, or simply don’t have the time to grind this mode too. Check out our Skill Rating boost service where we can help you reach your desired SR in no time, completely safe and anonymously.

Of course, we offer Placement Games and Top 500 boosting so make sure to check those out too. Good luck!