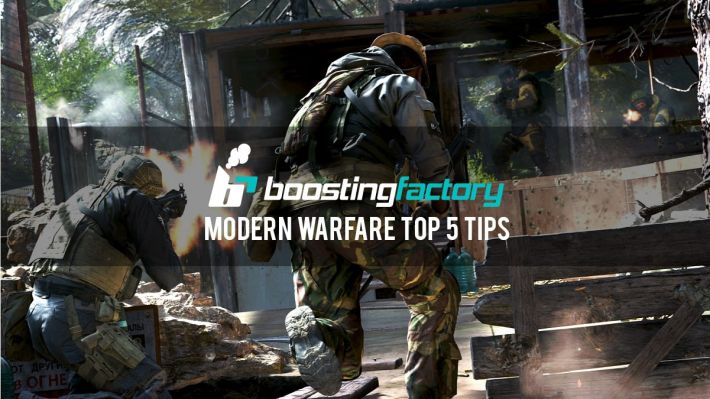 Hey everyone! I’m Blink and today I’ll give you some tips on how to become a better or even a pro player like me.

I’m a member of Boosting Factory’s Call of Duty Modern Warfare boosting squad, I also coach part-time. These are the top 5 tips I give to my clients in order for them to become a better Modern Warfare player.

1. Create a good weapon loadout for your playstyle

This year’s Call of Duty brought the classic weapon customization to another level with the weapon gunsmith which gives every single gun in the game a role. In our Call Of Duty Modern Warfare weapon tier list we rank guns by 3 tiers.

Keep in mind though, you still want to always use the right guns for the right maps! Using assault rifles or snipers on the larger maps and SMGs / shotguns on smaller maps is a detail you cannot ignore.

Do you prefer a more tactical approach to the game with good map positioning? Focus on attachments that help you with accuracy /damage/range Do you like to flank a lot and go for flashy close range plays? Aim down sight speed/movement speed/sprint to fire speed is key to such play style.

In the end, if you’re a beginner player, check out our top 3 CoD Modern Warfare weapon loadouts for beginners

Infinity Ward has disappointed a lot of fans this year by leaving out their 3 lane maps design. In my opinion, the maps are different, not necessarily bad. They are a lot more open and have a lot more corners to pay attention to and because of the very low TTK (Time to Kill) in this game, it slows down the pace of the game and forces you to adapt to a more tactical approach.

With that being said, don't run around in the open field without expecting to die in a second! Play at the edges of the map and pick your spots carefully. Have you ever been frustrated that you get killed from behind out of nowhere, you call it unlucky and blame the game? It's very very important to keep close attention to the radar, once every 2 seconds ideally.

Even without a UAV active you can tell where enemies are by the position of your teammates as the enemies will spawn away from them or you will hear them engage in a gunfight.

The Time To Kill in this game is the lowest we've seen so far. 3-4 AR shots close-mid range are enough to kill someone which is one of the reasons fans are not happy with the map design as they tend to die too fast and too random compared to previous CoD versions where you had a chance to turn a gunfight around.

A small mistake in positioning is enough to find yourself die to worse players a lot more often than expected. A passive playstyle is advantageous where you pick your spots (not a corner, that's considered camping!) and secure your angles.

You will always have the upper hand against someone running towards you because of the sprint to fire/aim down sight slowdown speed that should always guarantee you the first shot.

Like we were talking about earlier, you want to hold down certain areas where you don't push too hard and let the enemies come to you. Read the flow of the game, listen to footsteps and gunshots, predict where enemies will spawn and try to be the one who decides how the game plays out.

I myself find it hard to adapt to such playstyle after playing years of COD and I also find it hard to accept that players with an aim 10 times worse than mine can come on top in a gunfight. The more I play, the more I realize that being twice as smart is better than 10 times more skilled in this game!

Now, don't get me wrong. You can still flank and outplay people but it's not as simple as it used to be. You have to be a lot more calculated and most of the time, dependent on the dead silence field upgrade.

Most of your kills should come from reading your enemies’ position and catching them at disadvantage but sometimes you’ll end up running into someone/get caught off guard.

There are plenty of examples and they all come down to reading the situation and adapting to it and that's maybe a lesson for another time but for now, here are the 2 situations you'll most of the time end up encountering.

Sprint into someone and there's no way to go

You'll sprint into someone and there's no way to go, you have to kill or be killed. You never ever straight up aim down sights and out aim your enemy. They will always have the first shot on you and you'll end up losing every time. The only thing that works here is to make your movement unpredictable by either drop to prone or start jump strafing.

Drop to prone should be self-explanatory and you most definitely saw people pull it off on you. You aim, start shooting and as soon as you do that you drop to prone. That way they will have to track down to the ground to inflict the last 1-2 bullets to finish the kill on you, but since the TTK on this game is so fast, they will end up losing the fight because they have to adjust their aim while you don't and that gives you enough time to secure the kill. (NOTE: never crouch as that will almost always convert the shots of your enemy from body shots to headshots)

Strafe jumping is rather difficult to pull off but with enough practice, anyone can master it. The idea is to jump to either left or right then start shooting. Knowing your own movement gives you the edge when aiming as you know your travel path but the enemy has to react to your movement and aim accordingly which can most of the time catch them off guard.

Every gunfight you have you need to ''predict'' what's going to happen. You need in the moment to decide if you're going to come on top or die and react accordingly. If you think you'll lose the fight because he has a better gun in that situation or because he has better positioning - disengage!

Spray and pray is a mindset you never want to have, everything is calculated and you should only pick up fights you know you should win. If you think you will end up losing the fight, run or hide for the moment and wait for a better opportunity, it will come!

Modern Warfare, just like any other game strongly relies on mechanics, however, in Modern Warfare 2019, being smart is also a very important factor.

Use the tips I just gave you wisely and become a better player. I will be very glad. In case you still need help, Boosting Factory offers many boosting services such as Modern Warfare Camo boosting, leveling, achievements, calling cards and more...