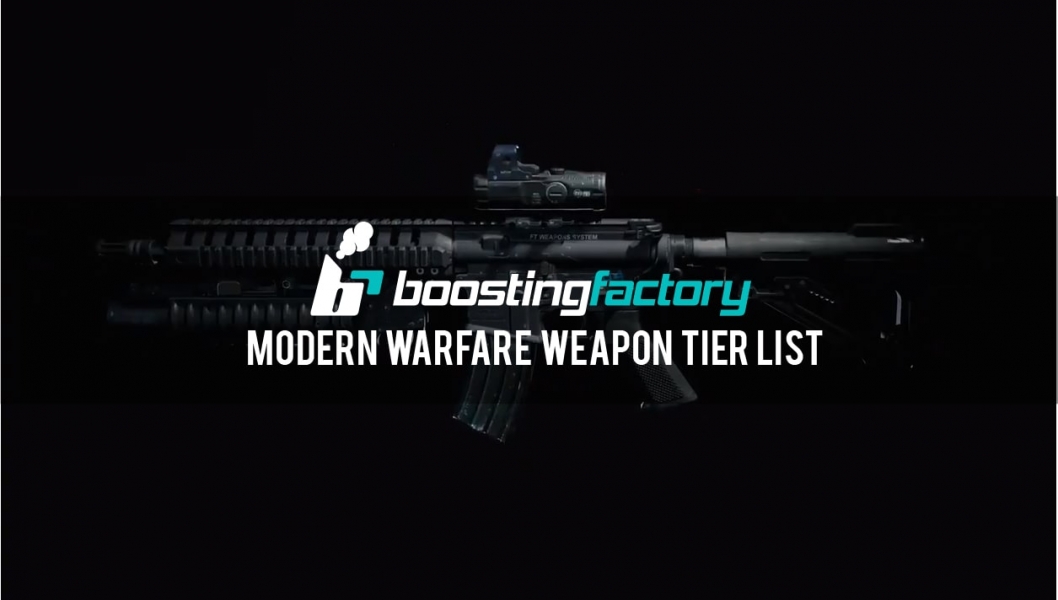 Hey everyone! Today I’m going to show you what are the Top 10 weapons to use in CoD Modern Warfare.

I’m a pro gamer focusing on games like Call of Duty, Overwatch, Apex Legends, and Counter-Strike, it’s my duty (pun intended) to know everything about the games I play in order to do my job efficiently.

So let’s dig in and find out what are the best Modern Warfare weapons in the game!

S Tier – These are the best weapons that you should strive to use at all times. However, an S tier sniper doesn't mean it's an A tier weapon globally. It's only S in that weapon category.

A Tier – Also great weapons that you should use if they fit your playstyle.

B Tier – Highly situational weapons that require a lot of mastery, if you do not have a lot of practice with these weapons, you could end up gimping your team’s chance to win.

C Tier – Probably for the best to skip these weapons.

Fennec - Fennec has really low damage but compensates with insane firing speed, getting an upgraded mag to 40 rounds is a must.

Grau 5.56 - Grau was introduced in Season 2. It's made for long range for large maps. Not great, not terrible.

Ram-7 - A decent gun with typical fire rate but struggles on long-range. You will need to get used to it's sideways recoil.

M4A1 - You can unlock M4A1 quite early in the game, at level 6. It’s a pretty accurate rifle that deals high damage. With some attachments on it, it becomes a monster. I suggest Operator Reflex Sight because the iron sights aren’t that good on M4A1. With proper attachments, the gun has almost no recoil and can be used at all ranges. M4A1 is probably the best weapon in Modern Warfare.

M13 - A very high damage rifle which only struggles with long-range firing, practice managing the recoil and you’re good to go.

AK-47 - During the beta, the Kalashnikov sucked quite hard due to ridiculous recoil, however, it got reworked and now it’s a decent balanced weapon. I suggest the STOPPING POWER GROUND field upgrade with it with which you kill the enemies in 2 shots to the body and one to the head.

FN SCAR 17S - You may remember this weapon as SCAR-H from Modern Warfare 2, decent at long ranges.

FR 5.56 - A burst rifle with three shots is obviously great at close range, but struggles at mid-range and is nowhere to be found at long-range. The recoil is also significant so manage that, rush, and one-shot everyone at close to mid-range.

FAL - Just not that good. Solid damage per shot but you need a quick trigger finger and mad skills when it comes to recoil control. Pick something else.

Oden - It hits hard but the fire rate is super slow, good two shots can kill a person, however, there are better choices out there.

Kilo 141 - It's a less powerful version of M4A1. Gives you a little more damage but less fire rate and precision.

Bruen Mk9
Holger-26
SA87 - Great damage for long range. Low fire rate means at close-range it will be a struggle, but carry a secondary weapon for that.

PKM - Insane damage and low recoil, only some recoil at long range. Poor ADS speed too.

M91 - You will struggle with people at close range, and mobility is also an issue, however, the long-range is great.

MG34 - This World War II gun fires quite fast which means in close range it’s decent but that’s not the goal of LMGs and there are better choices out there.

Striker 45 - This LMG was added in Season 2. Wasn't too happy with the performance, stick with the better LMGs listed in the list.

MP7 - This weapon is what you want from an SMG. Hits hard and fast, doing well at close and mid-range. Recoil is manageable and mobility is high.

AUG - Very high mobility and damage, accuracy isn’t that bad either considering it’s an SMG meaning it can do well in mid-range situations as well.

PP19 Bizon - Bizon has a big mag which is it’s major advantage, everything else is okay and average.

MP5 - This weapon is for those who want a more assault rifleish experience. Meaning, it has decent accuracy but lower fire rate.

Uzi - One of the classics, quite low damage, high mobility and fire rate but its too specific so I don’t suggest it.

P90 - Very high fire rate but at the cost of pretty much everything. Extremely good only for hip fire if someone is in your face.

725 - The strength of this shotgun is that it holds 2 shells meaning you can use it twice. Reload time isn’t slow either. Great shotgun.

Model 680 - Another pump-action shotgun that works if you land multiple shots, but the speed needs to be fast and you might be dead before you do even a second shot.

R9-0 Shotgun - This one is similar to 725, easier recoil and more damage but doesn’t work on anything but close range.

Origin 12 Shotgun - Semi-auto shotgun that does well on very close range and you can keep pumping out shots, however, any other range is useless.

EBR-14 - Very poor iron sights, make sure you get some attachments on. A decent semi-auto rifle for mid-range action.

Kar98k - Balanced sniper, play it if you don't like HDR.

AX-50 - Great for quick scoping due to fast ADS. Slower fire rate but great damage and that's what you want from a sniper.

Dragunov - Less damage but faster fire rate. Not what you want from a sniper, prefer damage.

I hope you enjoyed my CoD MW weapon tier list. Feel free to suggest any changes you might have, I’m open to discussion at any time!

If you need help with unlocking some attachments, weapons or any other achievements, feel free to check out our Call of Duty Modern Warfare boosting services such as Camo boosting, Weapon Leveling, Modern Warfare Account Leveling and many more…