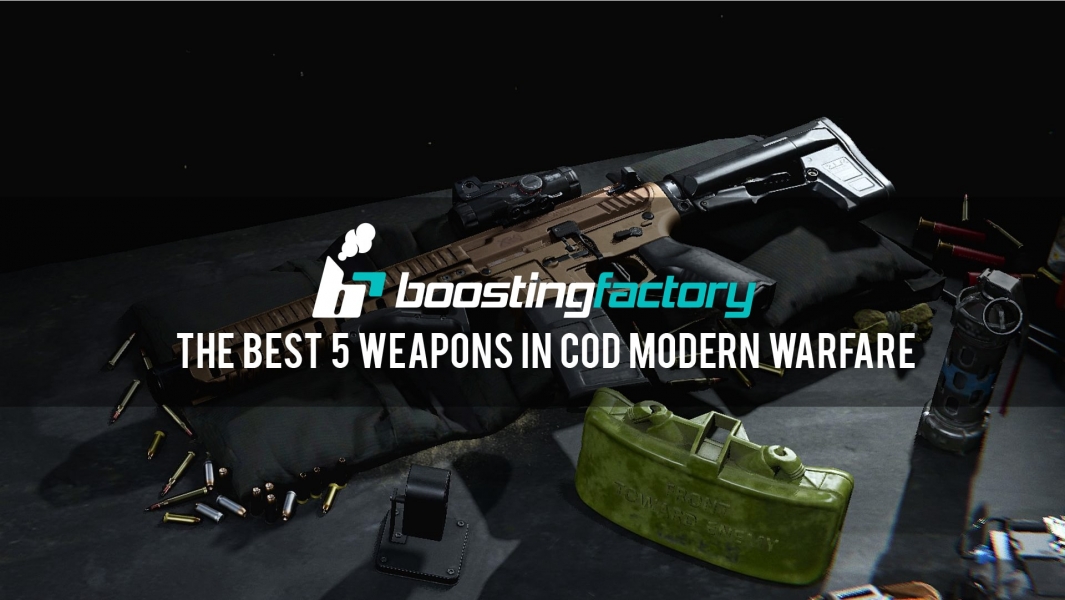 Hey guys! Right now, I’m going to show you the best weapon loadouts for Call of Duty Modern Warfare. In my opinion, these are the most overpowered weapons in CoD and I suggest you use them. Of course, this is a personal preference but you surely won’t miss by following my class setups.

I play these class setups often when doing CoD Modern Warfare boosting for Boosting Factory as I need to be fast and effective.

Without further ado, let’s start with the first weapon!

AK-47 is so damn good! The setup is as follows:

It will provide you with nice damage, bullet speed, and range but it will also lower your ADS a bit. But rest assured it’s worth it.

You can also run another Barrel such as an 8.1” Compact Barrel which will buff you with ADS and movement speed while nerfing your bullet speed and recoil control. I actually prefer the 8.1” Compact but it’s ultimately up to you!

This laser will give you decent accuracy and sprint to fire speed, this is probably the most important attachment. The downside to it is that your laser is visible. Of course, again, you can use the one you prefer, but note that the bigger your optic is, the slower your ADS speed is.

This attachment is actually called No Stock, to avoid confusion. It will give you some movement speed and ADS speed because we will lose quite a bit of ADS with this class setup so we need to compensate. And you don't get the stability and recoil control but that's not to worry about.

Once again, this attachment will give us more ADS speed and some sprint to fire speed. The downside is that we lose some aiming stability but it’s okay.

MP5 is another gem of mine that I love using, I just love it when I need to do a Gold camo boost on this weapon because I finish so fast, all camo challenges get done within few hours at most. And now I’m going to show you how to set it up to be just as good.

This bad boy will give you aiming stability, ADS speed and aim walking steadiness. The downside is that your laser is once again visible, but don’t worry, even better, you bait enemies in to close range and drop them like flies.

This one will provide you with aim walking movement speed but your stability will be slightly nerfed.

This attachment will buff you with recoil stability and aiming stability that you lost above with the stock. The downside is lost movement speed, however, this is an SMG and you don’t need movement speed that much.

This is the staple of this class setup, you want the 10mm auto 30 round mags. This attachment will give you more damage, and more range so you can hit the people in a long-range well. The firing speed goes down a bit, but your damage is heavier and recoil control is better (non-aiming).

You may have noticed that we’re using the same grip on the AK-47 and that’s because it’s so damn good. And you’ll see it more throughout this guide.

Once again, you get the ADS speed, sprint to fire speed while nerfing your aiming stability.

We’ve recently moved this gun on our best CoD Modern Warfare tier list higher because it’s so good. Let’s proceed with the attachments below.

This one will give you ADS speed (Yeah, I know! I love ADS speed) and nerfs your bullet speed.

This optics will nerf your ADS speed (Nooo!) but this is by far the best optics for this gun. It’s pretty small and fast and that’s what you need.

Again use the No Stock to get some movement speed and ADS speed but it lowers your aiming stability and recoil control.

We used this one in the MP5 setup, you get the recoil stabilization and aiming stability, that you just lost with the No Stock, while losing some movement speed.

Here it is again, I just love that sprint to fire speed since you really really need it when coming out of sprint since that’s a super-easy way to die if you don’t have it in a gunfight. You lose a bit of aiming stability, but who cares!

MP7 is, in general, an insane weapon and there are various classes you can play it with, but here’s one I currently prefer. It’s insanely easy to do CoD Modern Warfare weapon leveling when using this one.

Not much to say here because it’s quite good overall.

Just like on the AK-47, we’ll use the 5mW laser due to incredible accuracy and sprint to fire speed with the downside being that the laser is visible.

Again the commando foregrip to get some recoil stabilization and aiming stability because you really need another buff on the aiming stability since you took it away with the Forge TAC Ultralight stock and we’ll take it away a bit more with the next attachment.

Gimme that juicy sprint to fire and ADS speed and take my aiming stability if you must!

This one might come in as a surprise to spice things up a little, eh? This one-shot monster is too good to not try it out. I’ve done countless ribbon and challenges boosts with this one, it’s just good to sometimes switch from the assault and SMGs.

With this one, you get back ADS speed that you lost with the barrel, more aiming stability and the aim walking steadiness. Once again, your laser is visible so that’s a slight downside to this Laser.

This boy takes away some ADS but it’s not really heavy so you don’t have to worry about it.

This stock will provide you with some aim walking movement speed but lowering your aiming stability. The aim walking speed is pretty important when using a huge gun like KAR98.

And the last time I mention this one, forgive me, it’s so good. Very important sprint to fire speed buff with some ADS speed while taking away your aiming stability.

In case you’re new to CoD Modern Warfare and you don’t have all these unlocks, check out our top 3 beginner class setups for new players. Good luck!

This page was generated in: 0.58 seconds.