Hey everyone! Today I’m going to be talking about the fastest way to level up in the New World. As you all probably know, leveling can get quite grindy and tiresome, hence why I made this guide - to tell you about the fastest leveling up way.

I’m going to be talking about what to prioritize and what mistakes to avoid when leveling up in New World. Without further ado, let’s dig in!

Main Story Quests Over Everything

This one is probably not a shocker but main story quests are what you should be prioritizing. They offer 2-3 times more XP than side quests or 3-4 times more than faction quests.

This is extremely important because it will also mean you will be at a higher level than anything you’re fighting in that same zone, speeding up the leveling because it takes less time to kill stuff, and fewer odds of you dying.

When Mobs Are Higher Level Than You

If mobs are higher level than you are, you shouldn’t be fighting them or doing that quest, 1-2 levels are fine, but anything above that means that the process is slow, you might be dying, etc.

When you get to that point where the mobs are too high for you and you’re on your regular main quest route, you need to do the filler XP grinds. This happens for the first time at about level 25-30. At these levels, you also unlock your first dungeon (Amrine Excavation) so you can do that, it’s also fun and brushes your skills for PvE content.

The next one will appear at 37-43, and 52-55. Dungeon farming, Corrupted Breaches (Portals) farming, and side quests / blue quests are the way to go.

If you’re unfamiliar with portal farming, they’re portals around the map that spawn elite mobs that take a group to kill but give a lot of XP, so players usually form a group via chat and do it, so if you find a group, go ahead and join them. They also level up your weapon mastery. 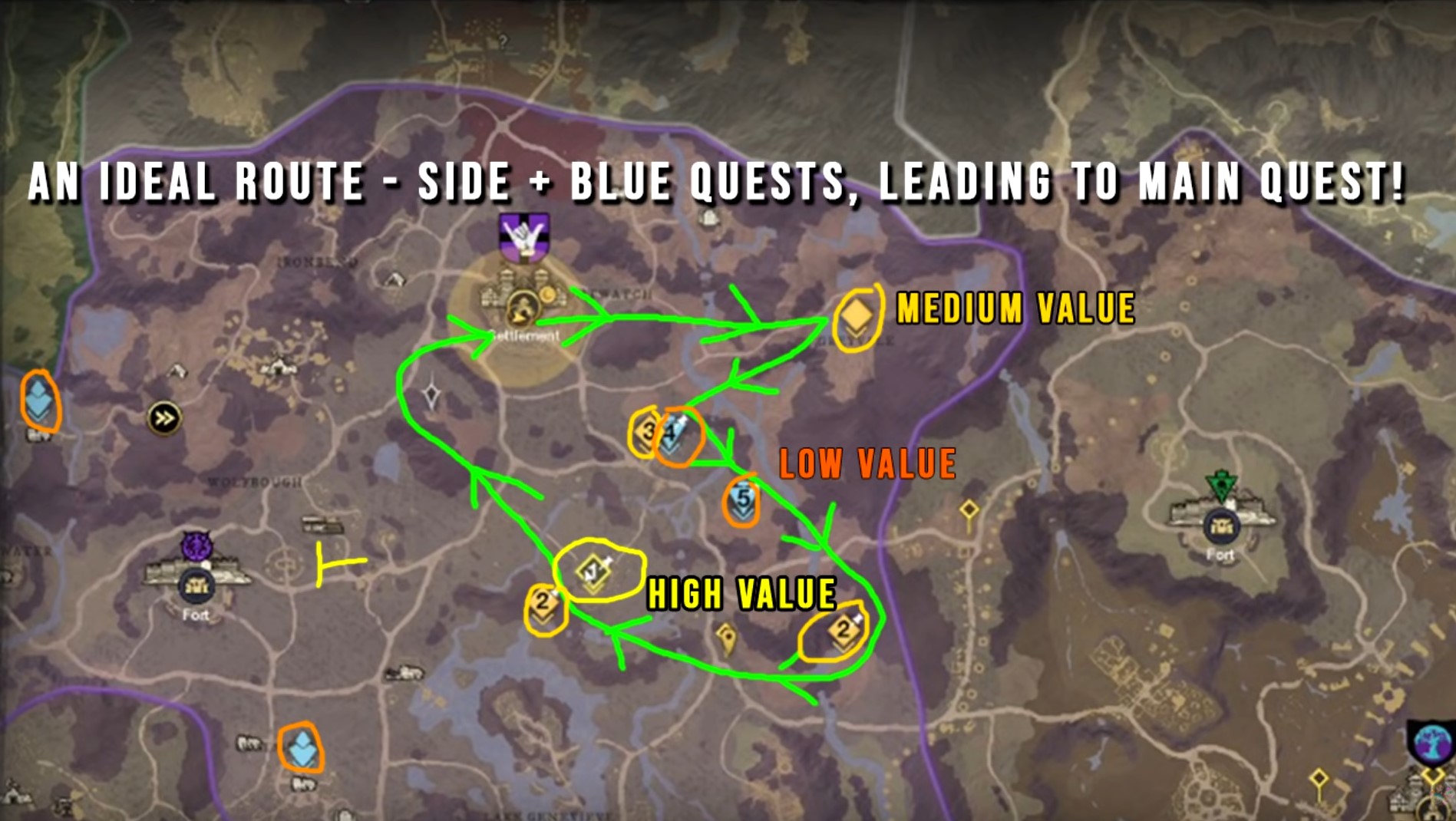 Before you leave the settlement, take a look at the Town Project Board near the Town Hall and check what needs to be done, you can then gather the required stuff, again, ON THE ROUTE with your quests and come back for a nice burst of XP.

To increase the speed of gathering materials, you should get Powerful Proficiency Boosters, they can be crafted or bought on the market.

How To Earn More XP In New World

Now that you know how to get the XP most efficiently in the New World, let me teach you how to increase the XP you earn.

The first mechanic, found in other MMOs is, of course, rested XP. Meaning that when you log out, you should be logging out in the settlement and not somewhere outside because once you’re back, a certain amount of rested XP will accumulate, making your leveling faster until you spend that bonus (+100% XP). The longer you’re offline, the more rested XP you get.

Via questing and doing stuff in that particular zone, your territory standing will increase, resulting in you getting a choice of cards to pick which offer various bonuses such as bonus earnings, gathering, XP gain, and so on. You should always pick up the XP gain bonus.

If you flag yourself for PvP, you will earn 10% more XP which is a great bonus if you are actually capable of beating other players like our New World boosters. It also makes leveling more fun, increases your skills, weapon mastery, and you also get loot from the kills. However, if you are dying often, it’s not worth it and definitely unflag yourself for PvP.

In case you really want to level up fast in New World, to maybe catch up with your friends or just enjoy the actual end-game content instead of grinding quests. We got you. You can buy quick and safe New World leveling here at Boosting Factory. One of my colleagues will do your account and level it up super fast, could be me as well!

The services are fast, safe, and risk-free. After you pay, you chill out while we handle the leveling.

Here are some additional tips in case you didn’t know about them.

This page was generated in: 0.14 seconds.