When Does League of Legends Season 6 Start?

Blog When Does League of Legends Season 6 Start?

We're often asked about this matter and today we'll try to shed some light on it, so when is the League Season 6 Start?

As of January 2014, about 27 million individuals would play League each day. These statistics show that millions of other devoted LoL fans are always playing alongside you each day.

Riot Games introduced the Season 5 edition of LoL on 21 January 2015. Fans of League thoroughly enjoyed this online game until 11 November 2015 when the Season 5 edition elapsed. To continue enjoying the ranked play, players look forward to the launch of the League Season 6 edition.

Fans of League are eager to know when the Season 6 edition will be released. Players eagerly anticipate the prospect of attaining high scores on League ladders.But, can we precisely tell when Riot Games will launch the Season 6 edition of LoL? In previous LoL editions, Riot Games has delivered official statements stating precise launch dates. Nevertheless, Riot Games has announced LoL launch dates only a few days before the releases. Riot Games would thus be unlikely to announce the League Season 6 release date at this moment. It is too early for Riot Games to make the launch date announcement for Season 6 of League. Gamers can thus only wait and speculate.

To get a good idea regarding when Riot Games may launch the Season 6 edition of League, it is insightful to review the release and end dates for previous Seasons. The table below outlines this information for you. 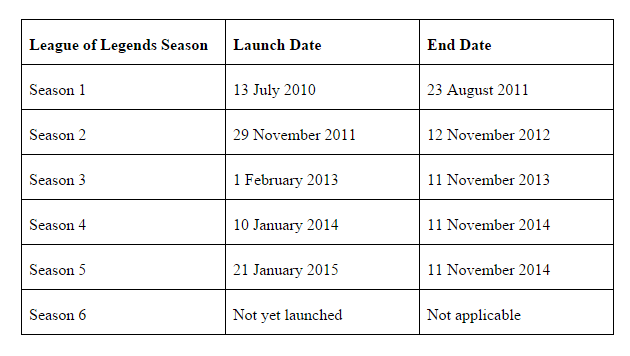 From this data, it is evident that Riot Games has taken between 2 and 3 months to launch a LoL Season after the end of the previous Season. Considering this Season End-Next Season Launch duration, Riot Games could launch Season 6 of the LoL on 20 January 2016.

Pre-season refers to the duration between the end of a League Season and the launch of the succeeding season. Consequently, given that Season 5 of LoL elapsed on 11 November 2015 and that Riot Games has not yet released Season 6, we are now in a pre-season stage. During the 2-3 months of pre-season, Riot Games gets busy preparing for the succeeding League Legends season. Such preparations entail modifying specific aspects based on the feedback provided by players. Within the pre-season stage, Riot Games usually asks players to submit comments about any game aspects that need to be improved. These adjustments are geared at making players’ experiences satisfying.

Another unique feature of the pre-season stage relates to elo decay; within this stage, elo decays do not happen. This means that you can ignore any pressure urging you to engage in ranked playing. Consequently, your elo does not fall to an inferior division. Which doesn't happen with our Elo Boost anyway.

During Season 6, you will play within the Ranked Rating category you played within the previous Season 5. Your Ranked Rating parameters in Season 6 will be determined by the number of games you win in your placement games. If you win many games, your Ranked Rating figures will go up. Of course we offer LoL Placement Matches boost as well.

Tips for Succeeding in Season 6

To ensure you are ahead of your friends in Season 6, you can make use of some professional help, we offer various Elo Boost services that you can check out on our website. We also offer various additional services such as LoL Duo Queue Boost with extra options such as Streaming and Voice chat.