League of Legends - Skillshot Guide - How To Never Miss Again

It’s likely that in your roster of mains, you have at least one champion with a skill shot. I don’t just mean anything aimed, like a Tryndamere E, but the hard-to-hit game-winning skill shots; Blitzcrank grabs, Ashe ults, Lux snares, you name it. It can also be easy to play a character and get away with missing a lot of skillshots (like with Shyvana or Mundo), but improving your hit-rate with any character can really up your game. Our elo boosting team often uses such champs as they're the most rewarding. This article will help you with the most key component of aiming: knowing where the enemy is going to move. In lower rankings, they might just move in a straight line and you have to aim a bit ahead of them; as you rank up, the enemy movement generally improves and you have to think a bit more before you use skillshots off cooldown.

Getting Ready for the Fakeout

For this part, I’ll refer to a VOD of one of Aphromoo’s solo queue matches as Thresh where he ganks mid.

Aphromoo’s gank and Lux’s reaction are pretty straightforward, and the gif ends right before Thresh actually throws the hook. Here’s where the decision-making process of the enemy splits. Lux obviously wants to walk back to the tower instead of walking further into the lane (possibly encountering the enemy midlaner), or walking into the jungle in the top left (because there’s no vision there and the enemy jungler might be around). To dodge the skillshot, see can move in any direction from her current point, but there are really only two “effective” options, going perpendicular from the endpoint of Thresh’s hook. 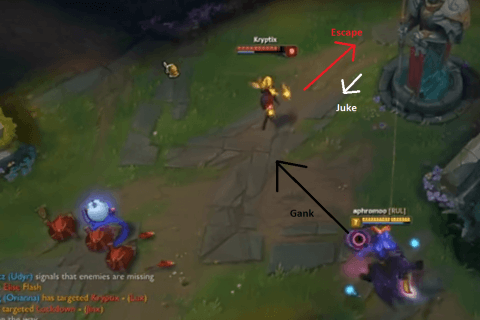 If Lux just keeps walking to the tower, it’ll feel too obvious--just aim a little bit ahead of where she is and Thresh will land the hook. She wants to dodge by walking towards the center of the lane. The idea is that it is less “obvious” for her to go back into the lane, so that’s where the “optimal” juke would be. Aphromoo knows this and will aim towards the juke position. He'd make a great addition to our LoL boosting team. Let’s see it in real-time.

There you have it. Try to think less about landing skillshots in terms of reading the player and more in terms of reading the map. Lux chose to walk there, yes, but her positioning made it the most optimal place for her to go, and Aphromoo knew that, too. Thinking about where a person is going to move in anticipation of a skillshot is dependent on defensive positional knowledge as well.

Not all cases are like that. You aren’t always playing Thresh and roaming mid. Most of the skillshots you’ll be hitting are in laning phase. Just like I said before, you have to use understanding of positioning to hit the skillshots, not just mechanics, advises our LoL boosting team. Let’s say you’re midlaning as LeBlanc against Ziggs. If you have the level advantage or item advantage, walking straight at him will make him want to move backward in the same distance. However, what if you have a long-range dash that positions you to hit all your other skills? 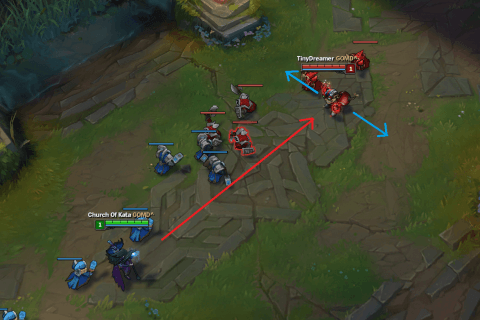 Here, the red line represents the dash and the blue lines represent where Ziggs can go immediately after. He can’t move straight back after a dash like that because it is too easy for LeBlanc to hit her chains; instead, he has to move somewhere perpendicular. Le Blanc doesn’t have to aim her dash directly at him, though. She can go slightly to the left or slightly to the right, forcing Ziggs’ perpendicular movement into a more predictable zone. Ziggs is obviously going to move in the direction that brings the most distance between him and LeBlanc, but if she figures this out just as soon as he does, she can hit her skillshot much easier and lead it into a kill or at the very least some heavy damage. Combine the two concepts--making the opponent go where you want them to alongside understanding their positioning within the lane as a whole--and you’re going to hit your skillshots more often, guaranteed. With these tips, you can get more pressure in your laning phase, which will snowball into more influence later on in the game. Late game, these can be the concepts that give you amazing picks that lead to advantages in other ways.