This Is The Ultimate HotS Deathwing Guide (Build, Tips & Tricks)

Hey, my name is Haze and today I'm going to show you how to play Heroes of the Storm's Deathwing and get as high as Grandmaster playing him.

I'm a professional player and a member of a HotS boosting team here at Boosting Factory, just like everyone who waited for years, we finally got Deathwing and I'm super excited to show you how to play him. Let's dig in!

Deathwing is armored with 4 plates. Each plate carries 10 armor for him. Every 25% HP lost makes him lose 1 plate. He can only restore plates by using his Dragonflight (Z). The number of plates restored is based on the health he has when he lands.

Deathwing is also permanently Unstoppable, meaning he cannot be stunned, slowed, silenced or even targeted by abilities like Butcher's Lamb or Stitches' ultimate, however, he cannot be buffed by any teammates abilities either. Basically nobody can interact with him. He also deals 100% increased damage to heroes.

Deathwing cannot use mounts. This ability channels for 3 seconds and launches him into the sky, making him immune to all effects and healing for 2.5% health per second. When he deals or takes damage, this ability is put on a 4-second cooldown, meaning he has to be out of combat for 4 seconds before using this.

This ability is universal for both of his forms. He launches a stream of flame in front of him dealing damage per second, this ability drains his energy every second.

Deathwing flaps his wings dealing damage around him.

After a short delay, he creates a pool of magma that deals damage and slows enemies standing in it. This is a ranged ability and works similar to Stukov's silence except he doesn't have to channel it continuously.

Deathwing lunges in the direction of your choice, dealing damage and slowing enemies, also those are that at the end of the lunge are damaged additionally. Melee ability.

Deathwing creates a fissure in V shape that deals damage to enemies and stunning them. Ranged ability.

Deathwing flies across the target path dealing damage on impact and leaving a burning ground for a short time that deals damage to enemies standing in it. He has this ability from the start of the game. Similar to Syndragosa ult by Arthas and you also land at the end of the path.

I and my colleagues from the HotS boost squad prefer to play Deathwing as a solo laner/bruiser, definitely not the main tank since you can't be healed or buffed by allies. Since he has Dragonflight, he can just get out of a fight anytime or Hearthstone back, and jump back in similar to Dehaka or Falstad.

You are also amazing at jumping in on fights and objectives, essentially, when there's an objective or a big team fight coming up, soak up as much XP as possible, Dragonflight right on time to do some damage on the landing and secure the fight and the objective.

If that isn't an option and you need to stay in the fight, grab some range and start using your World Breaker form abilities to poke, slow and deal damage.

You want to spend as much time as possible in Destroyer form. However, if you're low HP or it just isn't the time to go in (poke phase), you will use the World Breaker form and do damage/clear waves from a distance.

He is great on maps that require pushing and has objective clutch fights such as: 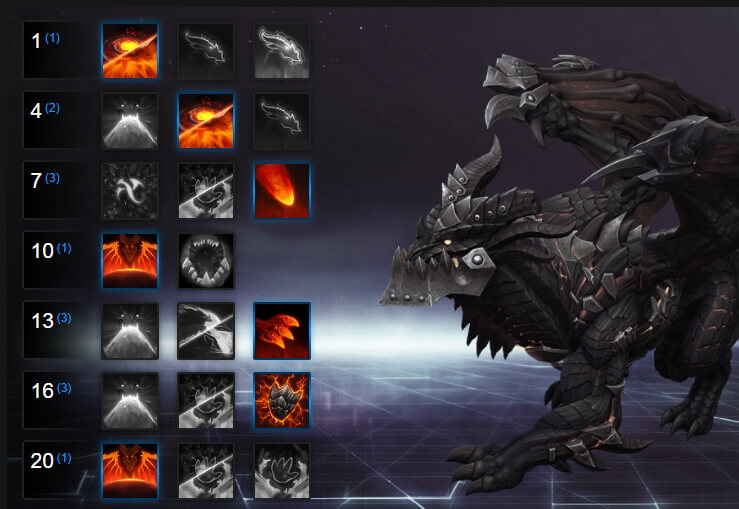 1. Most of Deathwing's abilities have a long cast time, you should practice by playing with such a hero and count for the delay.

2. You cant cast abilities for 3 seconds after you land from Dragonflight. Don't get carried away.

3. When the game starts, you immediately have ult Cataclysm as an ability to use, but it's on 270 seconds (4.5 minutes) cooldown.

4. When in Destroyer form (melee) you want to use your W and E more than you use Q, Q can deal the most damage but people can just dodge it. However, W and E are harder or near impossible to dodge if you do it well. Therefore those are the most efficient. When enemies are CC'd or rooted then you want to do Q for most damage.

5. A basic Destroyer form combo is E to charge in and hit as many as possible or reach their backline > W to do damage around you and then reposition to the direction your target is and use Q.

6. Your W in World Breaker (ranged) is similar to Chromie's Slowing Sands or Stukov's silence. Basically, when you cast it, it stays up until the cooldown is finished, then you can basically recast it and keep it up permanently. This can be used as a zoning ability on clutch points such as an entrance to the objective on Sky Temple or Infernal Shrines. If they are forced to escape through your W area, they are slowed and that's when you hit them with your breath (Q).

7. Your ultimate's damage isn't that high before level 10, basically, I suggest you use it mostly for escaping from an unfavorable situation. For example, if you're close to dying during an objective fight, Cataclysm out, Dragonflight in the air, recover and get back in.

8. After you get to level 10 and use the Burn Beneath My Shadow talent, your ult deals more damage but also resets when a fort or keep is destroyed. Make sure to use your ult when you're pushing the fort or a keep and it's about to drop, to deal damage to anyone in the way or a wave clear because it will automatically reset a second or a few seconds later when the fort is down.

8. If you play the build I suggested, your level 4 talent will make your W in melee form stack up and deal insane damage if you manage to keep up the stacks.

9. For your level 16 talent (Elementium Plating) you will only gain 1 more plate unless you obtain healing from another source such as a fountain. So when you're near a fountain and low HP, pop the fountain, approximate about 8 seconds before it will heal you fully, or to be on a safe side, make it 4-5 seconds, pop the Elementium Plating and enjoy more plates after the effect expires. This, of course, applies if you haven't popped it during a stressful situation where you might have died and needed the shield and regen.

Wrapping up the Deathwing guide...

I certainly hope you enjoyed my guide. I am aware that Deathwing can be played as a damage dealer too, I just don't prefer it and think this is the optimal way, of course, that's fully up to your preference!

Feel free to leave a comment so we can discuss or just to say hi! :)