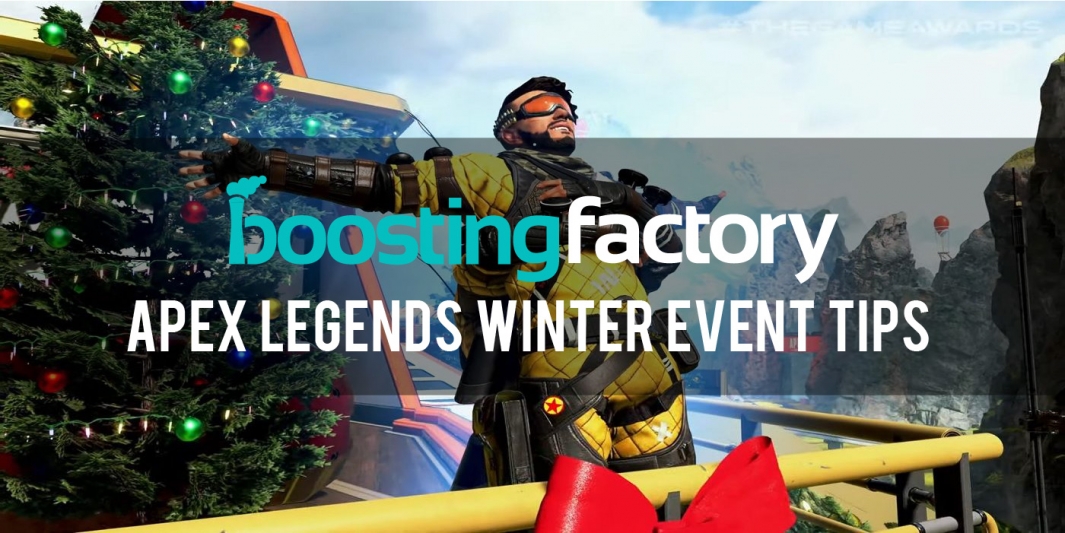 Hey guys! Apex Legend’s winter event is live, it has a crazy name Mirage’s Holo-Day Bash event, but nobody calls it like that, do they?! I prefer Apex Legends Winter event, or maybe a holiday event. Up to you. :)

I'm an Apex Predator booster here at Boosting Factory and today I'm going to talk to you about the Winter Express event tips.

1. Each Legend has it’s own loadout

When picking in the draft, you may have noticed that each legend has it’s own loadout, some legends have it good, some don’t. That’s the fun part. Wraith may not be so good today, maybe Caustic is the best one! However, they do change on a daily basis.

2. Your shield cells and syringes don’t run out

Even though the game says you have only one, you can use them infinitely!

3. You can see if a squad has quit

Since in the game, there are 3 squads of 3 people, a total of 9. On the top right of your screen, you can see how many wins each squad has. However, you can also see if a squad has quit the game, their progress will be greyed out and that’s your signal that a squad has quit and you’re only fighting one squad, which will help a lot with positioning and decision making.

If you kill all the enemies on the train, the bar won’t load, it will instantly capture the train. Be aware that there’s a time limit of each round, if nobody captures on time, round ends and nobody gets the points.

In order to actually start capturing, you don’t need to be on the train, you can be let’s say outside and just touch it directly.

4. You can change the attachments

Even though you are stuck with one loadout and there’s no loot to grab, you can swap the attachments between your weapons.

5. You can change the Legend between rounds

6. After you capture a train your teammates are revived

Capturing a train if you’re one or two, the remaining dead will be instantly spawned again and they don’t have to jump from the ship again like the losing teams.

A neat little thing is that if you play Mirage in his limited time Mirage Holo-Day Bash, you will be awarded double XP for regular leveling, not battle pass.

8. Don’t attack the train from the front

When an enemy team is on the train and let’s say you respawned back, don’t wait for it from the front, you’re giving them a good advantage and most of the time you will lose. I prefer to attack the train from the back and progress through it to the front while the enemy team is retreating.

9. Win the rounds by 3rd partying

If you’re not aware of what 3rd partying is, it’s essentially joining an ongoing fight between two or more squads when they’re already disrupted and damaged to pick up easy kills. Attempt to join fights only when 2 squads are already fighting and pick up the easy kills.

In Capitol City, drop to the highest building there is, it will also give you the Return to battle timer but it’s okay you will jump down in time. Then jump down to the lower building facing the train station, and from there you can do a slide jump on top of the train station.

Essentially, for all stations, drop on the highest ground possible and start from there.

10. Use the relaunch pads well

Use the pads not just to catch up with the train, use it to actually skip the train and secure a high-ground position in the next train station. At the start of the round, before the game actually begins and you can capture the train, jump around on pads to stay high in the air and away from the action and accidental dying. You can also wait it out like this to third party the enemy team.

Many players simply don't have time to grind out all the Apex Legends Winter Express wins, the badge for the last tier requires you to win 75 times! Especially during the holiday times when you're relaxing, traveling or just spending time with your family.

That's why we're here, check out our Apex Legends boost service, press the Achievements & Badges and select the desired number of Winter Express wins, our professional Apex players will help you out minutes after you place an order and get you your desired number of wins.

That's it! I hope you enjoyed my Winter Express tips and I wish you all the luck in the game!