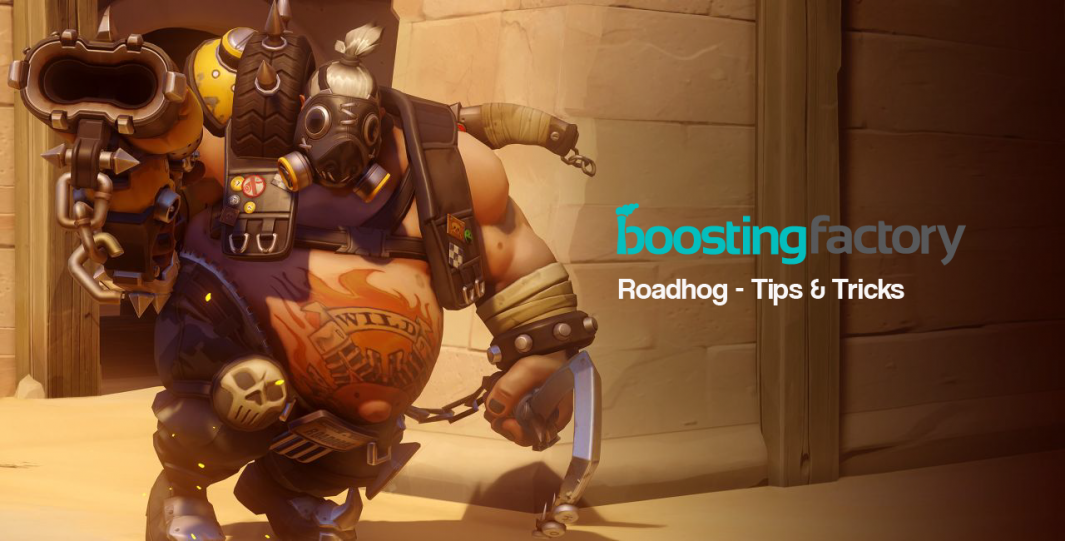 Hello guys! Our Overwatch boosting team continues their series of hero previews today talking about Roadhog. As you all know, since Blizzard decided not to release any Overwatch Beta Keys, it’s hard for many of you to have detailed informations about the heroes and the general Overwatch gameplay. That’s why we are providing these articles about our favourite heroes while we wait for the official Overwatch release date. Be sure to check our incoming Overwatch tier lists to see how your favourite heroes are placed during the Overwatch Beta! Name: Mako Rutledge AKA: Roadhog Age: 48 Location: Junkertown, Australia Occupation: Enforcer / Bodyguard Affiliation: Australian Liberation Front / Junkers Role: Tank Health: 600 Armor: 0 Catch Phrase: "I'm a one-man apocalypse!"

After the Omnic Crisis, the government gave them Australian Omnium and the surrounding area in the hopes that it would restore peace and bring back balance. As a resident of the area, Roadhog was forced out of his home alongside the majority of the Outback's residents. Being forced out of their homes is what turned these once peaceful people to violence. Roadhog helped form the Australian Liberation Front and fought back against the omnium, thriving as he took full advantage of his natural brutality and affinity for violence. After a particularly potent strike on the omnic power core, his home turned to a desolate wasteland covered in radiation. In order to survive in these harsh conditions, he wore a mask and began roaming the highways of the Outback, losing more and more of his humanity until the only thing that remained was Roadhog, the ruthless killer.

Scrap Gun: Roadhog launches a blast from his shotgun that deals a high amount of damage, but has a short range. Roadhog can charge this ability to fire shrapnel at a longer distance. Take a Breather: 8 seconds cd. Roadhog rapidly heals himself for a short time. Chain Hook: Roadhog launches an hook at a target location. Any enemy hero hit by the hook is pulled toward Roadhog. This ability can interrupt channels but can’t target allies. Whole Hog: Roadhog modifies his weapon, that goes fully in automatic mode, firing high damage bullets that knockback enemies.

The perfect support for Roadhog is Zenyatta. As we said Roadhog isn’t a good teamfighter, so most of the time he will roam around the map alone (thanks to his hook and decent damage). Zenyatta can heal him passively with her Orb of Harmony, so our strong independent tank doesn’t need to stop his chases. Another great hero to pair with Roadhog is Winston, our overpowered monkey. They are both tanks with high damage and crowd controls, and they make a scary dynamic duo. They can pull off a game changing combo in the later stages of the match: both their ultimate deal a good amount of damage and knock back enemies: Winston’s ultimate has low range, while Roadhog doesn’t. If they are able to chain their abilities they can easily defend any objective on the map. Torbjörn is another great addition to a team with Roadhog, thanks to his armor tossing ability. The extra armor is even more useful on tanky heroes like Roadhog, that already has a giant health pool, increasing effectively his survivability and making him great at dueling squishy assassins like Tracer who won’t be able to burst him down or to retaliate.

Widowmaker is probably the best tank killer in the game and is really effective vs Roadhog because he lacks armor. She can literally snipe him from the other side of the map and kill him in one or two shots, without much counterplay opportunities. She is great at countering tanks because she can lower their hp bar with low effort, neutralizing their engages. Reinhardt’s shield is probably Roadhog’s worst nightmare, as it can negate totally his ultimate and most of his damage and crowd controls. Without his ultimate DPS and the knockback, Roadhog is half a hero. Reinhardt's ultimate is also great at blocking any move from Roadhog, making him almost useless.

Roadhog isn’t great in team fights, so he is best used to duel lone enemies or to keep them away from objectives He compensates his lack of mobility with his crowd controls: he doesn’t need to dash to a target if he can pull them in with his hook or knock them away with his ultimate. Speaking of his crowd controls, he can manipulate easily the position of his enemies if he is able to chain the hook and his ultimate.

How To Counter Roadhog

Roadhog is a “lone hero”: normally he won’t group with his team, so try not to fight him in a 1vs1 but force a big team fight, where his team will effectively lack a member. Roadhog doesn’t have great mobility, so if you can pick a fight when he is far away from the team he won’t be able to do much. Shields, in general, are the best counter to Roadhog, as they can block his hook and his ultimate. This is why we saw many Roadhog players crying in a corner when facing a good Reinhardt.

This ends our review! Our Overwatch boost team reminds you again, for your safety, that the only way to get into the Overwatch beta is to get an official Overwatch beta invite from Blizzard: don’t buy any “key” or you will get scammed! Check our site in the next few days for more guides, previews of the Overwatch gameplay, news on the Overwatch release date and more information from BlizzCon as well!

This page was generated in: 0.71 seconds.