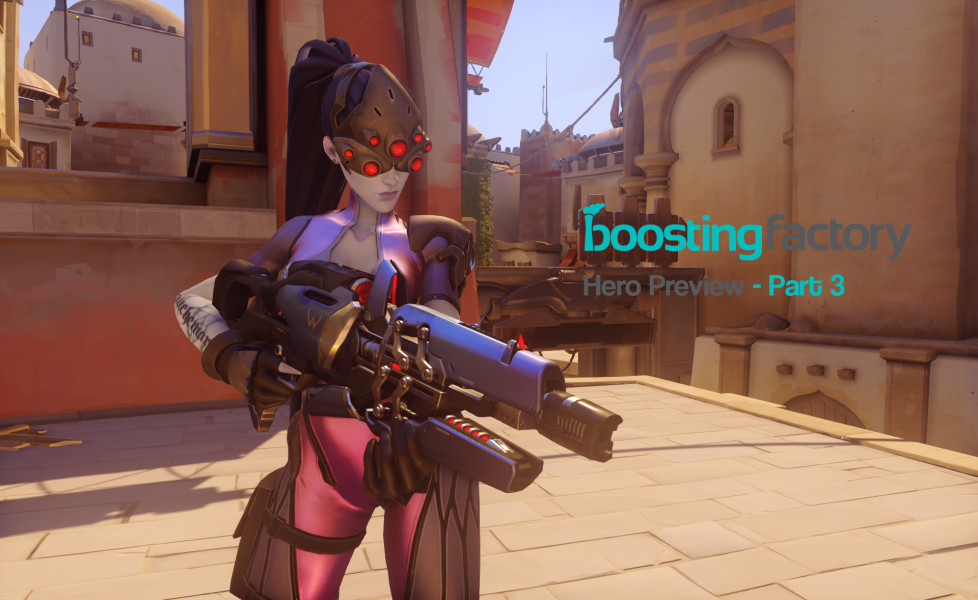 Hey there guys! Today our Overwatch boost team completed the final part of the heroes preview: Blizzard released a few short videos showing us a preview of the Overwatch gameplay and of some heroes. If you missed the previous posts (Part 1 & Part 2) with informations about Tracer, Hanzo, McCree, Lucio, Mercy and Zenyatta, Reaper, Symmetra, Torbjorn, Reinhardt and our favourite ape Winston, check it out right now, because the Overwatch release date is getting closer and closer: be sure to know everything about the game before Overwatch beta is released! To boost your performance, check our upcoming Overwatch tier list to always pick the best hero. Now let’s get back to the previews!

Pharah’s preview video was played on Watchpoint: Gibraltar, a brand new map where Pharah excels: during the game she reaches an incredible 37 kills streak! Surely the player was really good and had godly mechanics, but it’s an impressive result. According to our Overwatch boost team, Pharah got so many kills because she really shines on this map, that has a lot of wide vertical spaces. She has incredible mobility with her Jump Jet skill, as long as she has enough space to use it, and in this map that’s not a problem. We see her abusing her Jump Jet to escape messy situations, create havoc in the enemy team and to catch enemies out of position for quick kills. As you may imagine, this hero is pretty hard to play, not only for the jump but also her main source of damage, a rocket attack, it’s really difficult to hit consistently: but this high skill cap only makes the hero more fun! Pharah’s ultimate skill doesn’t really fit her theme of a hypermobile damage dealer, because Pharah is rooted for the whole duration. Sure, the extra damage is nice, but it’s not enough to justify the danger: the enemy team gets also notified of this ultimate by a distinct sound. In the video, we see how the enemy takes advantage of her Barrage ultimate to end her streak. Even if you feel safe, positioning is important to make good use of her ultimate. Her model is really cool and her kit is really unique: she will be a pretty fun hero to play with high mobility and damage, and we will definitely see her in a high spot in the Overwatch tier list.

This hero was announced at Pax, and now we can see her in action. We already knew that she was a tank and her model too - her distinctive pink hair will be easily spotted on every map! Her model is pretty unique: she is a badass bodybuilder with pink hair. If she gets in melee range, she will sometime stop using her gun to simply punch people. Yeah, who needs a bow or a hammer after all when you have your bare hands? She is a tank with really high utility: in the short video we see her saving his allies multiple times with her shields, especially in the beginning where she protects an overaggressive Tracer from certain death. Her kit has a cool interaction: her Particle Barrier shield gets charged by taking shots, and it charges her Particle Cannon, a nice damaging ability. Her ultimate is surely game-changing: in the video, she uses the crowd control from Graviton Surge to set up the perfect Particle Cannon for an impressive area of effect damage. This combo is hard to pull off, but very rewarding. If you enjoy high utility tanks that rely on combining their ability to be effective, or if you just like her pink hair, be sure to pick this hero up - I will surely do it.

This hero was already announced some time ago, and now we can finally see a little of her gameplay. Only a little, because she appears only in the second half of the preview, and we really want some more Widowmaker action. Take a look at her model: She is quite scary, isn’t she? As you may have noticed, her main weapon is a sniper rifle: she excels at long-range shooting but has also a couple of tricks to survive in close range combat and an escape tool. However, at the start of the preview, we see how not to play her: she gets greedy for kills, trying to exploit many sniping spots. She gets caught and is forced into short-range combat, where a sniper rifle isn’t really effective: instead of running or changing weapon, she tries to fight with her sniping rifle, with terrible results. As the preview goes on, the Widowmaker player makes better use of her kit, taking advantage of her secondary weapon, an assault rifle, that is surely more suited for fights in chokepoints. She finally gets rolling and does it with style, being a constant threat to the enemy team sniping enemies from safety, and providing a good fight for her life when she gets caught, thanks to the assault rifle for damage and her hook for escapes. As we see in the video, it’s crucial to always observe your surroundings when playing this deadly sniper, not only to catch enemies off guard but also to find secure spots to hide. The biggest difficulty of playing Widowmaker is surely to find the right balance between sniping and defense: if you spend too much time scoping, you will be meat for the enemies. Especially if there is a skilled Tracer or McCree player like in the preview video! Lastly, we add a final note: Widowmaker isn’t a pure, selfish DPS hero as we expected, but also has a nice utility tool for her team thanks to her termal vision: this ability applies to all her team, granting superior vision for a limited amount of time. Capitalizing on this window is essential to master the Widowmaker (no pun intended).

Bastion is the last hero in this list, but he is one of the most interesting. This cool robot is mainly played as a defensive hero, but his damage output can be insane. For example, on a payload map, his stationary turret can deal a massive amount of damage to the enemies when firing from a favorable spot, creating havoc in the enemy team and effectively zoning them off. Zone control is Bastion’s main strength. Tracer has more mobility, Reaper can deal more damage, but nobody controls priority zones like Bastion.If he sits on an objective with his stationary turret, no one can get close without being severely hurt. Maybe it isn’t the flashiest play style, but is surely rewarding! Our Overwatch Boost team was really impressed by Bastion zone control and survivability. We thought that the obvious counterplay to this monster was to sneak behind him and burst him down, taking advantage of his low mobility. Well, the enemies thought the same, but failed in the execution, because Bastion’s ultimate makes him a great duelist with incredible tankiness and damage: his transformation can turn the tides of a fight. And if you fail to bust him down in a short time, Bastion can hide away and heal most of the damage done, basically wasting the enemies’ time. He really looks like a dominant pick and will probably be on a very high spot in our upcoming Overwatch tier list: in this video he led his team to victory in less than seven minutes! This last preview ends our post.

For your safety, our Overwatch boost team reminds you that Blizzard won’t be using Overwatch beta keys because of safety reasons, so the only way to get in the Overwatch beta is to receive an official beta invite from Blizzard. Stay safe, don’t buy keys and don’t get scammed!